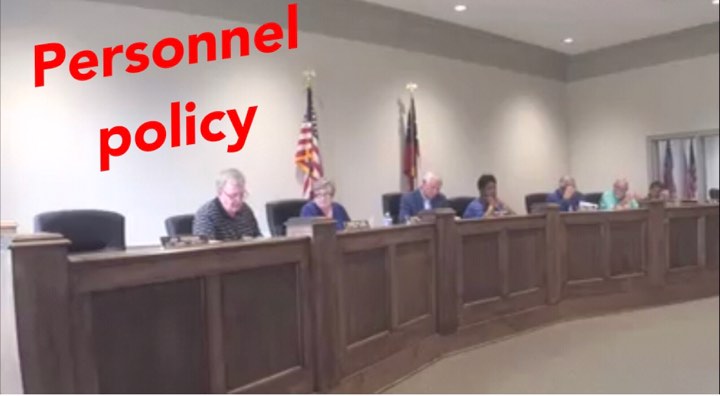 A proposed change to the City of Claxton’s Personnel Policy could negatively impact current employees who have accrued a substantial amount of vacation time and sick leave.

The potential impacts were brought forward Monday night at the regularly scheduled meeting where members of council* gathered to discuss updates to the internal personnel policy.The agenda item was brought forward by Mayor Terry Branch who has also been serving as the interim city administrator for more than a year.

Branch told council members that the personnel policy approved in April 2018 has a per year cap on accumulation of vacation time that can be rolled over into the following year, but there is no policy in place that sets a max – or lifetime- accumulation cap. Essentially, an employee who worked for 20 years could accumulate 96 hours of vacation time every year for a total of 1,920 hours and subsequently ask for the payout of the time upon retirement or departure. A maximum of 96 hours of sick time per year is also outlined in the personnel policy.

Under the previous personnel policy, employees were capped at a maximum accumulation of 480 hours.

“It may be prudent for us to amend our personnel policy to include a maximum accumulation,” Branch said. “Everyone remembers that it was 480 hours and we didn’t specify on the new personnel policy.”

Police Chief Dale Kirkland asked to addressed the Council to bring up two concerns: First, that hours to accumulate sick leave refer to an 8-hour work day, but hourly police department employees work 12-hour shifts. “It takes my police officers a month and a half to accrue one day of leave versus everyone else in the city it takes them one month to accrue one day of leave.”

Second, Kirkland told Council he was concerned about employees who had already accumulated hours beyond the maximum accumulation of 96 hours based on the current policy. Kirkland said 10-12 employees would already be maxed out if the proposed maximum accumulation was adopted and some could even lose hours. Kirkland said there isn’t a stipulation in the policy that  prohibits consecutive accumulation of 96 hours per year. The policy does not apply to Kirkland, who is paid on salary as opposed to hourly, but he asked that Council consider adjustments from an employee standpoint.

“I think you’ll find that [two weeks] is pretty much the norm,” Councilwoman Lisa Perry told Kirkland. “This is an exception. Most places get 4 hours a month, not 8…to me, this is very gracious.”

The mayor told Chief Kirkland that Council approved the policy – referring to the 96 hour cap – last year, but Councilman Risher Williard interjected saying, “it’s [the policy] obviously not clear. We have to have a cap, whatever number that is.”  Williard said at the state level, there is a cap of 360 hours of vacation/annual leave hours and 720 hours of sick leave.

Kirkland requested that Council address the entire sick leave and vacation subsection of the personnel policy at the same time and include approval to equate the 12-hour police shifts to the 8-hour administrative and office personnel shifts at city hall. Branch said the hour equivalency should be considered separately, not with the proposed policy.

Councilman Willard reiterated that the policy needed to be reworked entirely. “It talks hours, then it talks days…this is messed up. We need to make it more clear.” He also said it would make more sense to rework it all at one time – including the concerns brought up by the police department.

Branch said he would be fine to put the matter off if council members needed more time to consider the parameters, a suggestion that was greeted by a nod by both Willard and Perry.

Branch asked the Council what they would like to do in the event that an employee goes on long-term sick leave prior to the amendment of the policy by Council.

Mayor Pro Tem Larry Anderson suggested that it would be evaluated if it arises. “You have to be very careful about how you address that situation.”

No suggestions as to how to amend the policy were mentioned, but city employees noted that they would like to have hours accumulated grandfathered in, even if they cannot accumulate additional hours beginning January 1, 2020. When the city adopted a new retirement policy in 2016 with regard to how employees were permitted to continue working but collect retirement benefits, the new policy only applies to new hires.

The agenda item was tabled in a unanimous vote after a motion from Larry Anderson and a second by Lisa Perry. The next council meeting is scheduled for Tuesday, September 3, 2019 at 6:00 P.M. because of the Labor Day holiday.

*Councilwoman Joy Freeman was not present for the meeting.