The Catoosa County Board of Commissioners is set to consider an amendment to the commission meeting rules and procedures at the next meeting and citizens worry that the measure would stifle free speech. 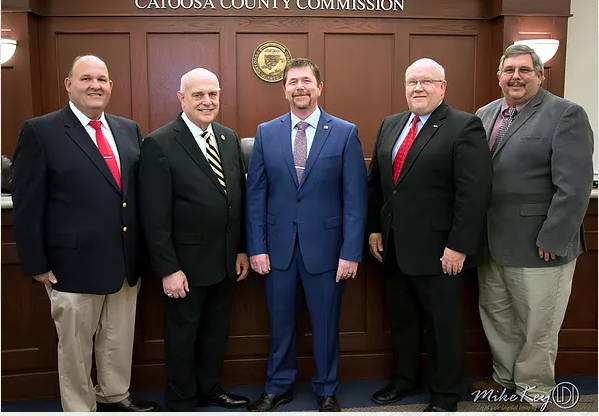 The Catoosa County Board of Commissioners is set to consider an amendment to the commission meeting rules and procedures at the next meeting and citizens worry that the measure would stifle free speech.

Citing needs to “improve efficiency,” the northwest Georgia county’s agenda packet includes a proposal to be presented by County Attorney Chad Young addressing how the public can address commissioners and under what circumstances. The agenda item, which appears on page 60 of the agenda packet, says it will allow commissioners to “be better prepared to address complaints and concerns raised by citizens.”

Among the changes would be a 5 minute cap per speaker, a comment request form detailing what topic is to be addressed (to be turned in ahead of the meeting before a to-be-determined cutoff time), and the prohibition of ‘profanity, threats, and personal attacks’ against Commissioners or staff. 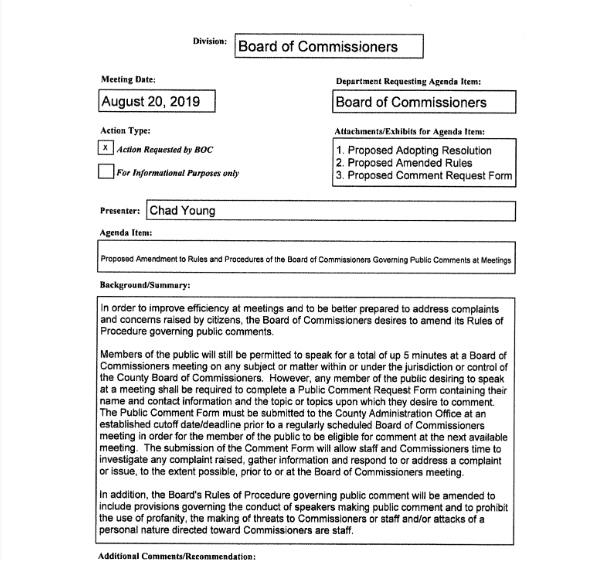 The agenda references a resolution for action as well a proposed ‘Comment Request Form,’ but neither were included in the agenda packet as of Monday.

Citizens were commenting on the proposal on social media ahead of Tuesday’s meeting.

Concerns in communities over these matters are often rooted in the idea that citizens can be removed by law enforcement, and subsequently face criminal charges, because of rules of procedure such as these.

Citizens have no ‘right’ to address their elected officials at public meetings, but both the Georgia Municipal Association and the Association of County Commissioners of Georgia encourage dialogue with the public. Both government advocacy organizations cite the ability of elected officials to receive public comment, but wait until more information can be gathered before responding or attempting to answer questions, if necessary.

But just as citizens have no ‘right’ to address elected officials, neither membership organizations nor the courts have established that local governments have a ‘right’ to be forewarned on the subject matter on which a citizen wishes to comment or an opportunity to investigate matters ahead of the meeting. In many instances, citizens wish to address elected officials in an open meeting simply to have their concerns on the official record.

The courts have, however, ruled that censorship must be ‘content-neutral’ not ‘content-based,’ in that local governments may limit citizens for time, for place, and to the extent that the topic is relevant to the governing body they address [i.e. – the war in Afghanistan is not an appropriate topic for a city council meeting], but may not be based on view point. Various legal precedents in courts across the country have held this position as the law of the land since at least the 1970s. They have also held that once a limited public forum is opened, the rules governing public participation must be applied equally to everyone. Further, Cohen v. California ruled that government cannot censor to make for a ‘civil society.’

A few examples of case law directly and indirectly related to public participation:

A Pennsylvania woman cursed at a public meeting while she was leaving the building and was charged with summary crimes – which were later dropped – and a disorderly conduct charge. The Assistant District Attorney in the case was quoted saying he agreed that the woman’s use of profanity was not criminal,  but not acceptable in a public setting, so he supported the disorderly conduct charge. The judge ultimately determined she was not guilty.

In White v. City of Norwalk, the courts upheld the removal of individuals being removed from government meetings because the comments were made from the audience – and therefore disruptive – not while at the podium during public comment.

Though the court cases are not identical, the courts have erred on the side of public participation and fewer restrictions for decades.

Additionally, elected officials are not barred from using profanity or making personal attacks against other officials or citizens. Threats are, understandably, already a criminal matter, which is why ‘fighting words’ and calls for violence are acceptable to censor in public meetings as well. But even the National League of Cities cautions against speech prohibition policies and what is actually ‘disruptive’ to a public meeting.

The Commissioner’s meeting is scheduled for Tuesday, August 20, 2019 at 6:00 P.M. Those wishing to contact Commissioners by email can do so at commissioners@catoosa.com