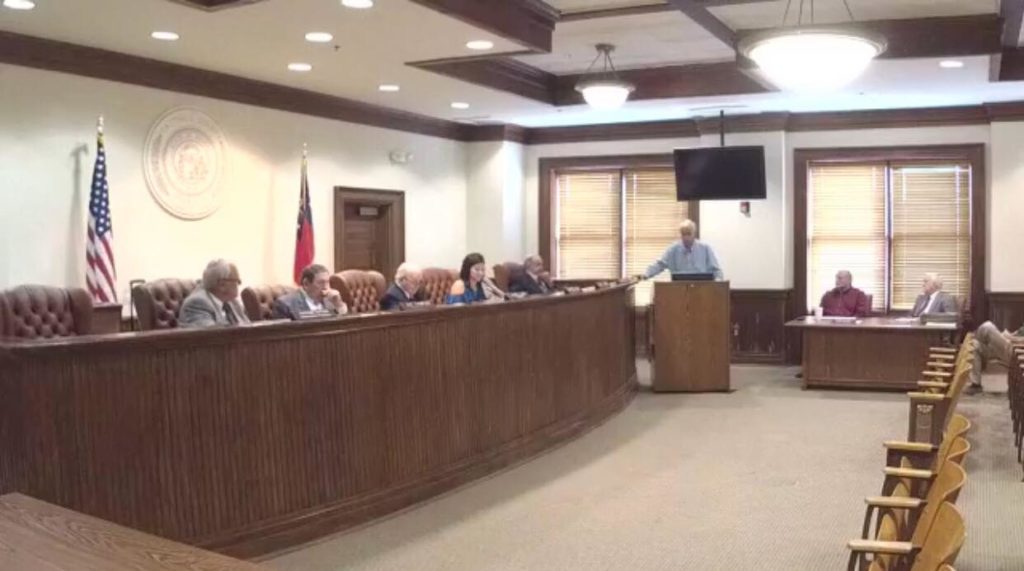 The request for early voting locations in Glennville was initiated by a candidate for District 5’s County Commission seat, Bill Kicklighter, over concerns that the June 18th special election would only offer early voting in Reidsville. He faces Steve Durrence and John Sebera* in the special-called election to fill the seat of the late-Bubba Burkhalter.

Discussion regarding the change for early voting appeared on Monday’s Commission meeting agenda twice – once for a presentation and recommendation by the Tattnall County Board of Elections and later by Kicklighter who had asked to appear before commissioners. Kicklighter previously appeared before the Board of Elections requesting early voting at STC, a motion that was unanimously denied by all members present.

On Monday, Dennis Odom from the Tattnall Board of Elections told Commissioners that the Board opposed additional locations for a number of reasons, including a deviation from the normal practice, the election already being underway, other available options to cast a ballot, and cost.

The Board of Commissioners had offered to fund the additional cost of early voting, but the Board of Elections said it would be upwards of $3,224 for the special election and a runoff. “Considering that only 216 early voted in the runoff election in 2016, we do not think it is worth the cost. This is only 10% of the registered voters,” the Board penned in a memo delivered to Commissioners.

Additionally, the candidates already knew early voting would only be available in Reidsville when they qualified to run, the Elections Board argued. The memo from the BOE stated, “To change this now at the request of 1 candidate, would be perceived as showing favoritism for this candidate.”

The Board of Elections also argued the availability of other options, including the availability to early vote in Reidsville for the three weeks leading up to the election (though, no Saturday voting will be available), voters can request an absentee ballot, or vote on Election Day – Tuesday, June 18th.

Upon the conclusion of the presentation, Chairman Jackie Trim asked for a motion on the matter, but no Commissioner spoke up and the matter failed for lack of action.

After the Commissioners handled another agenda item, Bill Kicklighter rose to speak at the podium and offer his concerns over the lack of early voting. He also said voter turnout is at an all-time high.

“Since I’ve been out campaigning, one of the first questions they ask is ‘Can we early vote?’ When you start talking about convenience, it’s about 21 miles one way from [some areas of the district] to Reidsville. That’s 40+ miles to early vote.,” Kicklighter said. The district spans from Shepherds Bridge to the Long county line. He also refuted claims that early voting would just benefit him, noting that the other two candidates are running for the same position and campaigning for the same votes.

Kicklighter referenced elections dating back to 1993 to define how the county has more registered voters now with fewer precincts on Election Day and during early voting.

“I don’t think you can put a price on a registered voter. I think everyone should have the same opportunity to vote, conveniently,” he said. He also refuted the claim that the cost will top $3,000 due to a runoff, saying a runoff could be avoided if more people early vote. Odom spoke up and said that the Board of Elections is required to plan for a runoff when evaluating costs.

In making his case, Kicklighter told Commissioners that he’d recently been at a political event with the Secretary of State and Senator Jack Hill. SOS Raffensberger, Kicklighter said, spoke on the importance of getting people out to vote. “Whatever needs to be done, to get people out to vote, that’s what they’re working toward,” he said.

County Attorney Joe McGovern interjected to tell Commissioners his perspective. “He made a good point about this year, elections being challenged, especially up in North Georgia and rural places where a candidate lost by one vote and had court challenges. You may not have a court challenge, it may not even be a close race, but then they could at least say there was no voter suppression,” McGovern said.

He is referring to a May 2018 state house race in north Georgia where the courts overturned two elections because of a local mix up where voters were casting ballots in the wrong district and the lawsuits filed by the Stacey Abrams campaign during the gubernatorial election in the fall of the same year. “

Elections board member Brenda Baggett was also present at the meeting. She told Commissioners that it doesn’t make sense to train three additional poll workers to be at Glennville precincts for early voting for three days and that it wouldn’t be feasible for 10, 15 or 20 people to early vote.  “We only have 1,200 people in the 5th district and we have early voting in Reidsville, we have an absentee ballot, and then we do have two offices open on Election Day,” she told them.

Kicklighter responded that “Every vote counts.”

Ultimately, Commissioner Wayne Tatum made a motion to acknowledge that the money had been budgeted and the decision would be up to the Tattnall Board of Elections, a vote that does not have any real impact on the decisions previously made because there was no directive action. Kicklighter asked if the Commissioners would put that in writing and send it to the Board of Elections for an on-the-record account.

*Mark Armstrong Durrence has withdrawn his name for consideration in the District 5 special election.