“SB 157 allows community banks to accept local government’s funds and allow  these banks in turn to reinvest and loan monies back into their own communities and spur economic activity. “ 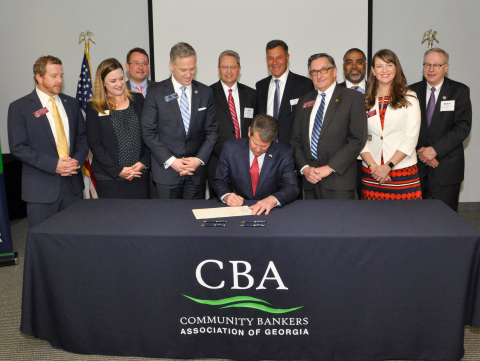 SB 157 allows community banks to accept local government’s funds and allow  these banks in turn to reinvest and loan monies back into their own communities and spur economic activity. The bill was unanimously passed by the legislature during the 2019 legislative session.

BA’s President and Chief Executive OfficerJohn McNair said in a press release, “We greatly appreciate Senator John Kennedy (R), Macon and Representative Dale Washburn (R), Macon, for guiding the bill through this legislative process. We are also thankful for our partnerships with National Federation of Independent Businesses (NFIB), the Georgia Municipal Association (GMA), and the Association of County Commissioners (ACCG) in making this bill a possibility. SB 157 will change people’s lives, and all of us at CBA are proud, honored and humbled to have had the opportunity to impact Georgia’s community banking industry in this most positive manner!”

According to the release, the measure will allow community banks to compete with large, mostly out-of-state banks, for local municipal accounts and deposits. “Georgia’s community banks will be able to dramatically increase lending in their local markets thereby helping small businesses start and grow, funding homeownership as well as a variety of agriculture and consumer loans.”

Governor Brian Kemp praised the efforts saying, “By supporting small businesses and local entrepreneurs, this legislation is another positive step toward a new day in rural Georgia. I thank the General Assembly and the Community Bankers Association for their hard work on this important issue and their efforts to bring greater prosperity to all corners of our state.”