A dispute over a constructed cell tower led the tower company to do ‘exhaustive research’ on the City of Oak Park’s legal boundaries. Their attorney says the 1998 annexation – which includes I-16 and the north side of the highway – was not properly done and is therefore void. 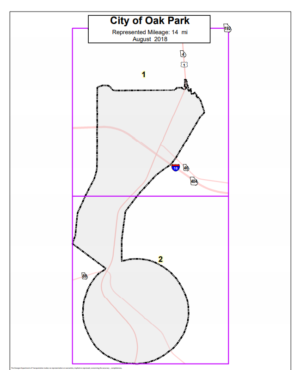 A cell tower erected on U.S. 1 just off Interstate 16 in 2018 has been unwanted since construction began, but discussion over compensation for the property and the deconstruction of the cell tower has Oak Park considering issues much bigger than a cell tower.

The issue dates back to the Spring of 2018 under a previous elected administration and City Clerk Monica Slater. At the time, Council discussed a cell tower being built on property adjacent to the Zip n Go gas station near I-16. Council members Elaine Strange and Diane Wilson vocalized opposition to the construction because the matter had not come before Council to be voted on and their first knowledge of it was after the project was well underway.

At the time, City Clerk Monica Slater said she would look into the matter and reach out to the company, but the city was in a state of turmoil over financials, back taxes, and a number of other matters which led to the resignation of Slater in June and the hiring and departure of two more clerks before year end. The matter was finally taken up by George Rountree of Brown Rountree in Statesboro and after months of correspondence, Oak Park City officials heard from lawyers representing the tower company at a council meeting earlier this month.

Allyn Stockton and Josh Huff appeared before the Oak Park Council during the October meeting on behalf of MetroSite, the Mom ‘N’ Pop company out of northeast Georgia that was responsible for acquiring a location for the cell tower and coordinating the efforts to construct it.

Huff told Council that the company begins the process by identifying service rings for customers, ranging from 500 feet to 7,000 feet, and the service ring in question is placed at the center of the ring – meaning it serves Oak Park and unincorporated Emanuel County.

Reportedly, the company contacted the Slater with the City, who directed them to the Tax Assessor’s Office for tax maps and property classifications. The Emanuel County Tax Assessor’s Office reported has the area near the highway classified as unincorporated Emanuel County, not the City of Oak Park, and that is the information the company used when evaluating the land use for the tower. After conducting an environmental study, Huff said the FCC and the FAA identified the property as Twin City and that no one from Oak Park or the county vocalized concerns or offered feedback when the notices were run in the newspaper as required by law. More importantly, Huff says the landowner did not know he was in the city limits of Oak Park.

“All of our research showed this was unincorporated Emanuel County,” Huff said. He noted that when he first reached out to Slater, who told him cell towers were prohibited when he asked for ordinances and other city information that was not available online. Huff said if it was going to be an issue, the company would have selected a site further north.

“The first we heard of all of this was in the demand letter in May of this year,” Huff said. “We did everything in good faith that could have been done.”

MetroSite also contended that any type of dispute in court, even if ultimately decided in their favor, would negatively impact the company in a very dramatic way – to the point that the company could cease to operate.

The Tax Assessor’s Office has since updated their records, but Attorney Allyn Stockton says that isn’t the problem. He contends that Oak Park boundaries were never legally extended.

Stockton represents the City of Tiger as well as Rabun County in Northeast Georgia and is familiar with municipal law. He says the 1998 annexation did not meet the standard for procedures to annex property when cities expand. “It does not appear to be proper,” he told city officials. Stockton cited City of Byron v. Betancourt, which established that cities must pass annexation by ordinance, advertise the annexation, and other line items before an annexation can be valid. He said their research shows that Oak Park did not have the annexation ordinance or proof of the advertisement of said annexation and the meeting minutes do not reflect such an act. Additionally, ordinances in Oak Park are not codified and published online as required by law, Stockton alleged.

“In the eyes of the law, it hasn’t happened,” he explained. “It appears that annexation would be void if we went to court. We hate we’re here, we hate this situation, but we didn’t have notice of what y’all were claiming.”

Prior to the annexation, Oak Park’s city limits were only the circle in the image of the city limits above.

The property where the cell tower was constructed is not owned by the City of Oak Park, but a private landowner. The land is merely leased by the company.

Attorney George Rountree refuted a number of the claims made on behalf of MetroSite before offering his own questions of Huff and Stockton. Rountree asked who was physically in Oak Park during site selection and document acquisition. “So, you would have driven by the city limit signs?” Rountree asked Huff, who said he couldn’t confirm. “You would have driven by any way you came in. Are you aware this tower is about a mile inside those city limits?” Huff only replied that it is not in the city limits because the annex was not proper.

Rountree also took aim at Huff and Stockton for what he referred to as a ‘veiled threat of having the city charter revoked.” When Rountree asked Huff some of the specifics on the tower, Huff said he already gave Rountree all of the information.

“Y’all aren’t acting like someone coming here asking for mercy,” Rountree told Huff and Stockton, referring to the risk of negative impacts the pair cited if Oak Park lodges a complaint against the company. “You’re not answering questions, you’re not providing information.”

Stockton stepped in in an attempt to diffuse the situation saying things would be different if they knew the City was even claiming annexation. “The records that we looked at did not show that in Oak Park,” he said.

Rountree was unconcerned with the position of Huff and Stockton and reiterated that the tower is not compliant with the city ordinance – not for height, setback, the fall zone, or liability insurance requirements. Rountree said he was most concerned with addressing the concerns of the citizens for safety and appearance. “That’s what I’d like to do, instead of having an argument,” he told them.

Some citizens have inquired as to whether or not a prescriptive easement would apply in this case. Georgia law recognizes an easement by prescription when one party uses the property of another, without permission, for a minimum of seven years, but if use of the land is by permission, no easement can be established. This is established in a 1998 case – Douglas v. Knox.

Additionally, Oak Park does not maintain roads, has no property taxes assessed in any capacity, and provided only police services on that side of the interstate so the City likely wouldn’t meet the standard for use, either.

Huff and Stockton left Oak Park without a resolution and city officials directed their own city attorney to look into the matter further. Stockton said they appeared before Council to put everything in context, not because they are able to offer the tower at this point.

Huff said that the City could face a counter suit for damages if the city continues on with the process of challenging the tower placement. “We can’t get that genie back in the bottle once it’s open,” Huff said.