The Screven County Planning and Zoning Board unanimously to recommend denying a request by Atlantic Waste Services for a conditional use exception for a proposed landfill in Screven County Thursday night. 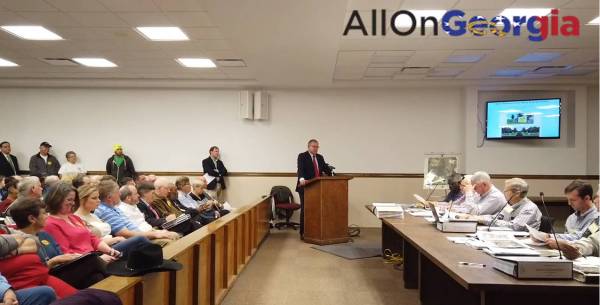 The Screven County Planning and Zoning Board unanimously to recommend denying a request by Atlantic Waste Services for a conditional use exception for a proposed landfill in Screven County Thursday night. The decision came after a lengthy public hearing lasting two and a half hours and coming eight months after the application was first filed by AWS.

The decision, however, is not final as the matter now heads to the Screven County Board of Commissioners who are expected to vote on the application on March 19 at 6:00 p.m..

Director of Planning & Zoning for Screven County Randy Hagan presented the terms of the conditional use permit for a Municipal Solid Waste (MSW) landfill before Atlantic Waste and concerned citizens were able to address the zoning board. Hagan presented a timeline of several hundred pages detailing the events since the application was submitted in July 2019 and running through March 5, 2020.

Attorney Frank Jenkins of Cartersville, who was contracted to represent the county in the consideration of the land use matter, presented the guidelines of the meeting, giving one hour to Atlantic Waste Services for presentation and supporters of the landfill land use application and one hour for opponents before discussion by P&Z members.

Attorney Bob Lovett, who represents Atlantic Waste, introduced ‘constitutional objections’ before the formal presentation for the use application. Lovett said Georgia law requires that objections be presented to the Planning & Zoning Commission as well as the full Board of Commissioners, though he did not cover the document in its entirety during his portion of the presentation. He asked that P&Z board members keep an open mind due to the amount of time, money, and blood, sweat and tears put forth in the application.

Among the items Lovett mentioned:

AWS stated the county violated the first and fourteenth amendments in how it handled the AWS application.

Ben Wall of AWS then presented on the 84 acre MSW landfill proposal – better known as Green Meadows – on a 956 acre property that would be expected to employ 35-40 people. Wall made his case in stating that the application met the conditions and standards set forth by the county, noting that his engineers as well as the firm hired by the county – TruGround Environmental – confirmed that ‘based on testing of the disposal footprint area,’ the site is both suitable and in compliance with the Solid Waste Management Act of 1990. He said the floodplain would not be impacted, that the wetlands would not be impacted, and that no Carolina Bays are on the property, according to the Georgia Department of Natural Resources. Wall also said the site would be in compliance with federal laws pertaining to airports, fault lines, and national historic sites.

Wall said the need for the landfill is there, though, with other landfills facing capacity in the next 10 years. “The facility will provide a needed piece of infrastructure in the area instead of trucking waste 130 miles round trip,” Wall said. He also noted that the current practices are a strain on governmental resources and will ultimately save Screven County millions of dollars.  He touched on the traffic expected on the roads near the property and the Property Value Protection Program to compensate landowners who would not be able to sell their property. Wall also told the P&Z Board that no coal ash would be accepted.

Dewey Morgan, Chairman of the Sylvania-Screven Airport Authority, presented for a large portion of the opposition time. Morgan cited a letter received by the Authority and county officials from the FAA in Jacksonville which reportedly cleared the site from any possible issues related to air traffic with regard to the landfill. Morgan said the letter was not on official letterhead from the FAA, which led him to do additional research. He discovered the letter was solicited by AWS and signed by an employee who was a high-level air traffic controller and not a low-level air traffic controller and had no knowledge of the Screven County Airport. Morgan said he contacted higher ups in the federal agency and disciplinary action is expected.

Morgan also said that so long as the Screven County Airport is accepting federal funds, it is bound by federal laws and regulations, including those for proximity to landfills. The Authority has accepted $4 million in grants since 2005, which requires compliance for 20 years after each grant. Failing to do so would mean the Authority would have to return $3,636,390 to the FAA, Morgan said. Additionally, citing federal regulations, Morgan expressed concern that it would halt any additional expansion of the airport, specifically if it would increase airport traffic.

Damon Mullis, Executive Director of the Ogeechee Riverkeeper, also spoke in opposition of the application for the site. In describing his organization’s efforts to protect the Ogeechee River, the river basin, groundwater, and aquifers, Mullis said, “This proposal is a threat to that drinking water that we all rely on and the waters that we rely on for fishing and recreation.” He also discussed the threat for pollution and contamination. “The liner will fail. It may not fail the first day, but it will eventually fail. Anyone who says otherwise is misinformed or disingenuous. That’s very problematic.” Mullis said the soil quality and high water tables in the coastal region present an increased number of issues for the area and that the region will bear the burden well beyond the 30-year life of the landfill.

Environmental Attorney Don Stack spoke in opposition after Mullis and implored the P&Z members to listen to the cries of the local people. “Your job, your mission, is to deal with planning and zoning for Screven County, not for Mr. Wall, not the entire southeast region, not the coastal area…all you have to do is drive around the community and see absolutely what the feeling of the community is as it relates to this landfill. The health, safety, welfare, and comfort of the community.” Stack also referenced the continued funding cuts to both Georgia EPD and the EPA and what impact that will have on the enforcement of ensuring the landfill is up to the right standards. “I’ve been doing this for over 35 years. I would not have a job if companies did what they’re supposed to do.”

“If this is such a wonderful project, why aren’t counties lining up?” Stack asked.

Citizens and property owners John McAfee, Noble Boykin, Renee Volf, and Alan Stewart also spoke in opposition with McAfee telling P&Z members that no one with a Screven County address had spoken in favor of the landfill during the meeting. Volf, whose land is closest to the landfill, said property taxes may be reduced because of the landfill, but that would be due to decreased property values more than anything. Stewart focused on lacking county infrastructure.

The sole citizen to speak in favor of the landfill and land use application was Kevin Shaw, who manages landfills but not for AWS, in his employment capacity. He called the MSW landfills ‘state of the art’ and stated the host agreements give the counties the authority to limit what AWS hauls in and how much the county wants to charge him to do that. He also said he has lived adjacent to three different landfills and they did not have groundwater issues and the landfill facilities improved the area.

Owner of AWS, Burke Wall, rose to speak at the end of the presentations, a move that was met with loud boos from the crowd as they shouted that ‘time was up.’ He asked that an additional packet of information be added to the record instead.

After more than two hours and twenty minutes of presentations, the P&Z Board took ten minutes to review documents and procedures before reconvening for a vote. The vote on the recommendation to deny the application for the land use application was approved 6-0.