Two line items in the City of Claxton’s budget proposal have drawn concern over how money is paid to the Claxton-Evans Chamber of Commerce and whether or not those payments are in compliance with the provisions in the state constitution.

The Claxton City Council recently held a budget hearing on the proposed FY 2020 budget which comes at just under $5.5 million. The city is contemplating raising the millage rate – by up to three mills – to account for the General Fund failing to break even.

The City of Claxton, in recent years, has dedicated more than double the amount of money to the Chamber for “economic development” than the amount appropriated to the Economic Development Authority (EDA) created by the legislature, which totals just over $6,000 annually. But the money for the Chamber is only permitted as an exception to the state constitution’s gratuities clause under a strict contractual agreement…an agreement public records show does not presently exist.

The Gratuities Clause is a section in the Georgia Constitution (See Article III, Section VI Paragraph VI) which prohibits the General Assembly from using tax dollars or state property to donate, offer a gratuity, or forgive a debt or other obligation of a private entity or individual.

In more recent years, the courts, including the Georgia Supreme Court, have ruled that the clause extends to local governments.

Just last fall, R. Reed Gignillant presented for a Georgia Bar Association section’s 65th Annual Institute for City and County Attorneys and noted that the Gratuities Clause, through court opinions, had even been extended down to hospital authorities, development authorities, school boards, and local pension boards. This is a well-known prohibition and is outlined in the Georgia Municipal Association’s Handbook for Mayors and Councilmembers.

The City of Claxton’s money for the Chamber does not meet those standards, but after a contract provided to AllOnGeorgia following an Open Records Request does show a contract workaround existed at one time.

A 1994 Contract with the Chamber & the City of Claxton

An agreement executed by the Chamber and the City of Claxton on August 18, 1994 outlines almost 10 pages of contractual obligations that the Chamber of Commerce is required to adhere to in order to receive the monetary appropriations from the city of Claxton on an annual basis. It was provided to AllOnGeorgia after an open records request was filed seeking the contract that exists with a provision to circumvent the gratuities clause. The provision in the contract cites OCGA 46-60-14, which allows cities to enter into contracts with 501(c) 3 or 501(c)6 organizations — or chambers of commerce — for terms of one year or less for the purpose of economic development.

The money is appropriated, per the contract, to an Economic Development Committee (this is different from the Economic Development AUTHORITY, which is a governmental entity) within the Chamber of Commerce and the funds are supposed to go directly to development-related expenditures.

The 1994 contract explicitly states in Paragraph 1 that failure to provide such services in the manner in the contract “shall constitute a default” and requires both the City of Claxton and the Chamber to maintain the records related to budgetary expenditures, economic development, and other contract for auditing purposes.

The contract in its entirety is available at the bottom of the article.

Is it conflicting with the practice with the Claxton-Evans County Chamber?

A follow-up Open Records Request filed by AllOnGeorgia seeking the monthly reports as prescribed by the 1994 contract in order to receive funding was sent on May 22, 2019. [Full request at the bottom of the article.] On May 29, the City responded that no such records exist. City officials also said that the Economic Development Committee required to exist by the Chamber was dissolved in 2010, citing “duplication of services,” – likely a reference to the Economic Development Authority. 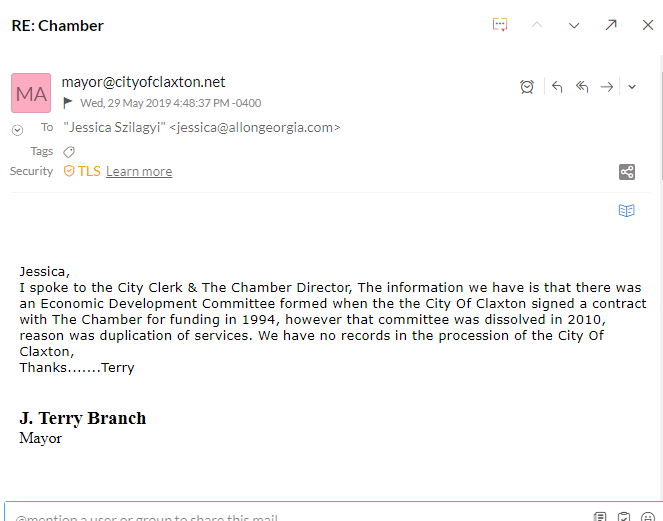 The Chamber was required to operate an Economic Development Committee as a condition of the contract in order to receive funding and to be in compliance with state law, but has not done so for at least the last nine fiscal years. During that period, the City has awarded the Chamber upwards of $175,000 in annual appropriations.

More recently, the City of Claxton has donated even more to the Chamber outside of the state parameters with the free use of the building. The Chamber office, located at 302 Railroad Street, is owned by the City of Claxton. The Chamber uses the building alongside the Economic Development Authority and the City is responsible for the utilities. The office space is not included in the 1994 contract, which requires any additions or changes be made in writing and kept on record, and it conflicts with a position that the Georgia Attorney General’s Office previously took prohibiting a municipality from gifting property to even their own rec department, which is responsible for a governmental activity. Per the reasoning by the AG, the building would be better ‘rented’ to the EDA, an extension of the city and the county, and the Chamber would in turn pay rent to either the EDA or the City. That is because the AG’s office has held that government property can be leased for fair market value if the term of the lease is reasonable. 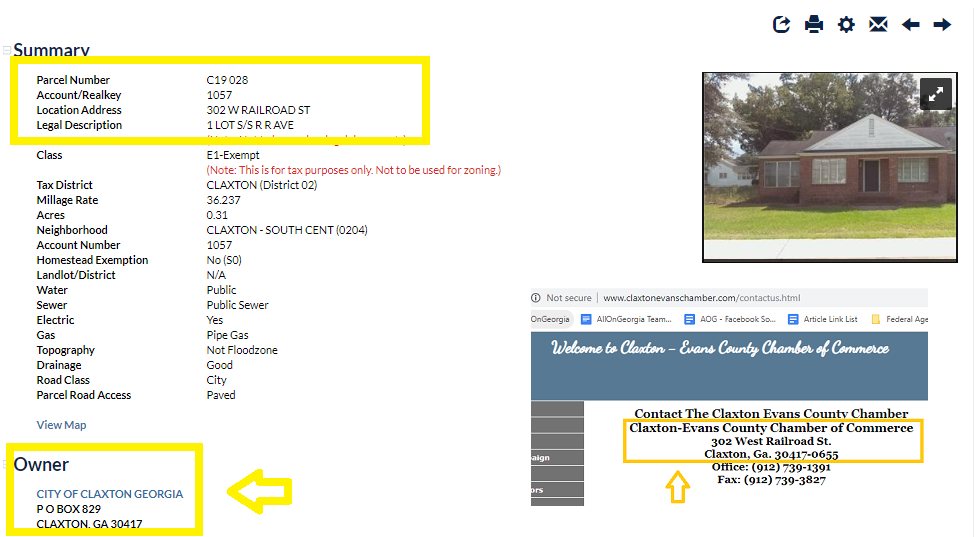 Because the City of Claxton cites no records related to the 1994 contract, it is not clear if the City and the Chamber adhered to the contract prior to 2010 when the committee was dissolved.

To summarize, the City of Claxton’s compensation to the privately-owned Chamber:

What About the County and the Chamber of Commerce?

Evans County stopped providing funds directly to the Chamber a few years back, citing the gratuities clause and the fact that an Economic Development Authority is constitutionally created to provide the services the Chamber is duplicating. The Commissioners still sent $50,000 to the EDA each year, which the EDA in turn used, in part, to pay the Chamber for rent on the building the City of Claxton owns.

Evans County Commissioners have, however, proposed halting funding to the EDA for FY 2020.

What happens when the gratuities clause is violated?

The Chamber, in not adhering to the contract, has put the City of Claxton in a predicament due to the legal and constitutional issues due to noncompliance. The obligation to ensure taxpayer monies are used legally rests on the city since the city is the one appropriating the funds.

Going forward, the City can halt sending money to the Chamber all together and can even ask that money be repaid in years where obligations were not met.

Former Cobb County District Attorney Vic Reynolds, who is now the Director of the Georgia Bureau of Investigation, has even lobbied for lawmakers to make violations of the gratuities clause a punishable criminal offense.

As for Claxton, the City has not yet voted to approve the FY 2020 budget.

1994 contract with Claxton and Chamber of Commerce