More information is now available related to a teacher at Tattnall County High School who made headlines last week after he was told his coaching position was not renewed due to comments made on social media. 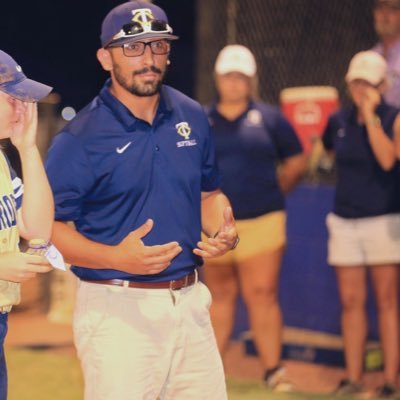 More information is now available related to a teacher at Tattnall County High School who made headlines last week after he was told his coaching position was not renewed due to comments made on social media.

The Tattnall BOE is limited in what it can say in statements about current personnel and ongoing matters, so AllOnGeorgia filed a comprehensive Open Records Request (ORR) last week when the story broke over claims that a teacher at Tattnall County High School was relieved of his coaching duties due to social media posts.

The details of the records request are outlined below, but documents show a slightly different justification for the meeting with Huerta and administrators on June 24. Statements recorded in Huerta’s personnel files show a focus on Huerta’s professionalism during the meeting, state that Huerta was provided an opportunity to ask questions and make his case, and rely on a year of concerns over the status of Huerta’s teaching certification in consideration for noting that Huerta would not be offered a coaching position for the 2020-21 school year.

Additionally, a letter from the Board of Education attorney released on Wednesday relied on the commentary within the posts as opposed to Huerta’s posts generally, essentially saying that had the same statements been made in the classroom – instead of on social media – they would still be problematic. (Huerta’s attorney refutes this justification, which is detailed later in the article.) The comments, not posts, made by Huerta that have been noted as problematic are in boxes 4 and 6 in which Huerta says the people with a particular view point are ‘ignorant’ and then that a parent has the ability to request a different teacher: 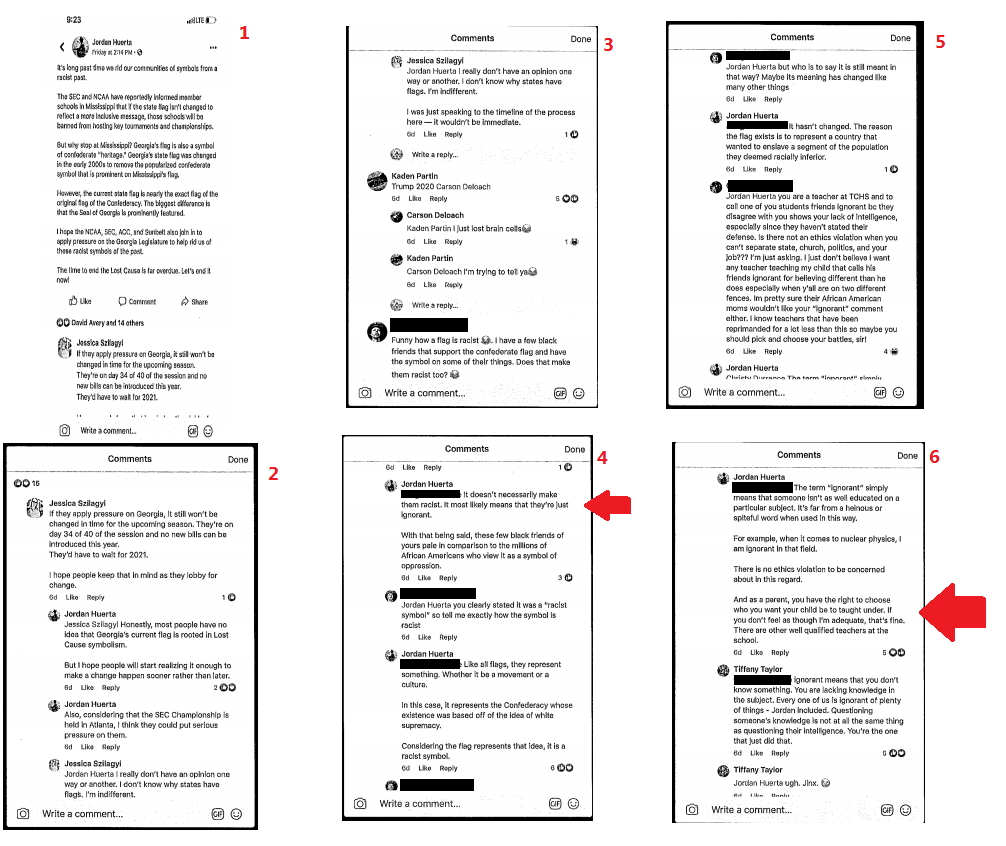 A larger image of the 2 in question: 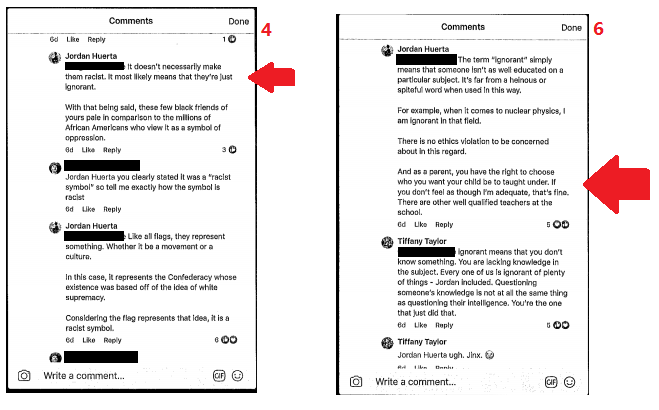 Citing federal case law, the same letter says Huerta was not subject to dismissal proceedings with regard to coaching because coaching falls under a supplementary contract. Huerta, like other teachers, signed his contract as an educator in February 2020 but the school system does not formally execute contracts for supplementary details until after the Board of Education approves the budget for the upcoming fiscal year. That is done in the fall each year, so the contention is that Huerta was not ‘suspended’ or ‘relieved’ of his duties, but told he would not be offered a coaching supplemental position for the upcoming school year – a decision within the authority of the respective school principal.

The Tattnall BOE is limited in what it can say in statements about current personnel and ongoing matters, so AllOnGeorgia filed a comprehensive Open Records Request (ORR) last week when the story broke.

Among the items sought the following items:

While the Tattnall County School System does not have a social media policy, the school system requires teachers to complete ‘Code of Ethics’ training annually. The training entails a video from the Professional Association of Georgia Educators (PAGE) which has a subsection on social media standards as prescribed by a lawyer for PAGE.

AllOnGeorgia reviewed the video on Wednesday but could not obtain a copy for publication due to the copyright issues. In the video, a lawyer for PAGE provides a rundown of ‘best practices’ and the difference between what is ‘unethical’ and what ‘can create problems in the workplace.’ The lawyer pronounces that there is a right to speech protection, but there is not a right to work in a school system. “Be weary – don’t add kids, parents, coworkers. Be cautious in who you are adding and engaging,” the lawyer says in the video before noting that political beliefs are nothing but trouble and headache.

The school system provided paperwork where Huerta acknowledged on the SafeSchools portal that he completed the ‘Code of Ethics’ training in October 2019.

Any correspondence from the central office or the administration of Tattnall County High School which offered a directive on social media/current events/protest participation or other similar matters to employees generally in the period beginning May 1, 2020 and ending June 28, 2020

No directives or other correspondence on the subject matter were provided to employees during this time period or as a result of current events around the state and nation.

Any complaints made between June 1, 2020 and June 28, 2020 made in reference to the social media/protest participation/other non-academic activities of any teacher at Tattnall County High School

Copies of four separate written complaints pertaining to Huerta and his social media interactions were documented in Huerta’s file. All four were made during the month of June.

Any disciplinary memos/letters/emails/documents of verbal reprimands for any teacher at TCHS between June 1 and June 28, 2020

Jordan Huerta was the only TCHS teacher to receive correspondence and be called for an in-person meeting on any matter in June 2020.

Additionally, Huerta’s file included three written statements detailing the meeting with Huerta and administrators on June 24. The statements are below in their entirety, but excerpt summaries are as follows:

TCHS Principal Lakisha Bobbitt: “…the area of my concern was with the commentary that ensued between the teacher, student, and parent. The post itself was used as a point of reference to ensure the teacher was clear on my concern for the actual commentary,” Bobbit details in saying that Huerta was given an opportunity to present his case, but had to be redirected to the commentary and not the post itself. “Throughout the conference, the teacher was reassured that his ability to exercise Freedom of Speech was questionable to some, but within his rights. It was suggested that he use caution in exercising his Freedom of Speech in a public forum involving current students and parents. He was informed that his professionalism will a time comes into question.”

“…Professionalism comes into question when an educator participates in what is perceived as an insult to a student based on his or her beliefs and the tension that could result from such commentary. Professionalism comes into question when an educator creates the perception that Tattnall County High School supports the theory that teacher inadequacy can result in parental requests for a teacher of their liking.

“As another point of clarification, “Suspension” was never verbiage I used, nor was any coaching decision based on the content of a social media post. The social media post itself resulted in a conference based advising the individual of how Freedom of Speech and the expectations of an unbiased teacher could come into question…”

TCHS Asst Principal Allen Yancey: Yancey wrote, “Mrs. Bobbitt explained how that gives the perception that that was the school’s policy [referencing requesting another teacher if a parent didn’t like the views of a teacher] when he said that on Facebook. He said that he didn’t see anything wrong with what he did. She told him that he wasn’t going to coach during the upcoming season. Mr. Huerta asked if he was being punished for this, and Mrs. Bobbit said that it wasn’t a punishment but that she was concerned with his inability to see that fussing on Facebook with current students and parents was unprofessional. Mr.Huerta told her that suspending him for a year was a big mistake. When she asked him if he had any more questions, he said no and left the meeting.”

TCSS HR Director Gwenda Johnson: “The teacher was given an opportunity to address his take on the exchange. Teacher said that he did not at any time feel that he was disrespectful. Throughout the conference the teacher was reassured that his ability to exercise Freedom of Speech was within his rights but our concern was when you start speaking for the school. Mrs. Johnson expressed that as professional, Tattnall County School personnel present themselves appropriately on the Internet and that any representation or portrayal as an educator on a site that students have access to that could cause students to lose respect for the educator and compromise the educator’s effectiveness and professionalism is a concern…The teacher said that he uses social media to educate and inform students of history and events.”

When asked if the action of not offering coaching for the upcoming year was punishment, “Teacher was told no but that it concerned us that he acknowledged no accountability in the situation.”

Teachers employed with the school system have two components of their personnel file. One is a ‘permanent record’ for school system records, so to speak, and another file that is held locally at the respective school that details administration-related matters. AllOnGeorgia received both as part of its ORR .

Records in Huerta’s personnel file show he submitted a formal letter of resignation, effective May 27, 2020, on January 24, 2020. The letter was acknowledged ‘received’ but was not accepted by the Board of Education before Huerta submitted another letter the following month rescinding his resignation ‘after further consideration.’ Email correspondence attached to those letters shows Huerta did not complete his GATAPP teaching certification requirements within the three year period as agreed to with the school system and in an email Huerta told HR Director Gwenda Johnson that he had “fallen too far behind to have a shot at completing it” and did “not intend on acquiring a certification.”

In one of the emails recorded in his file, Huerta says he was late in providing a job application document to the central office because he had been “really busy with baseball.”

Technically, Huerta would not be permitted to continue teaching after this school year due to his lacking certification, however, the First District RESA granted him a one-time one-year extension on his provisional certification to complete GATAPP. The school system said that it is not common practice, however, there was no issue renewing his contract for 2020-21 once due to the RESA-approved extension. The school system maintains that adherence attaining a certification corresponds with professionalism standards.

The school system provided a policy on grievances which the system says to date has not been invoked by Huerta or his attorney. While the central office was made aware of the matter, it does not formally go before the Superintendent and/or the Board of Education unless this grievance process begins.

On Wednesday, Huerta’s attorney, Bruce Dubberly, released the letter from the school system attorney along with a statement, which is below the graphic of the letter.

The letter from the school system attorney: 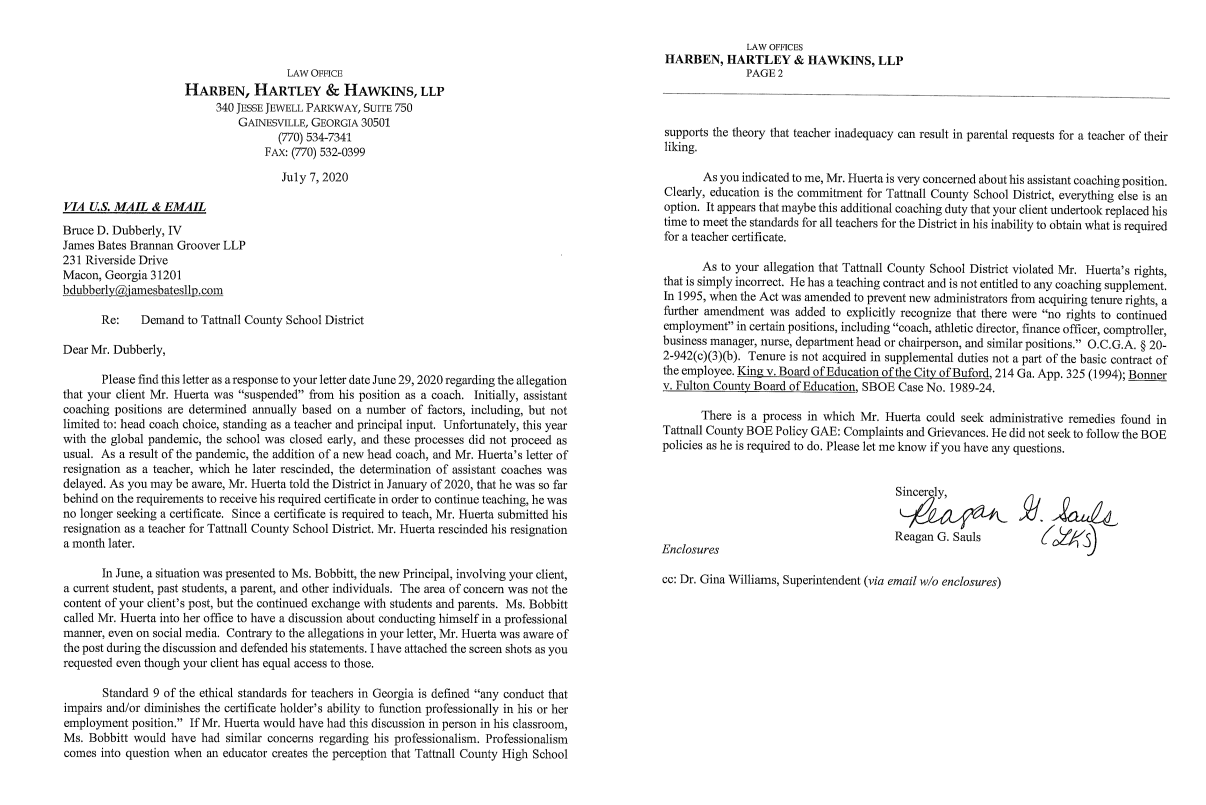 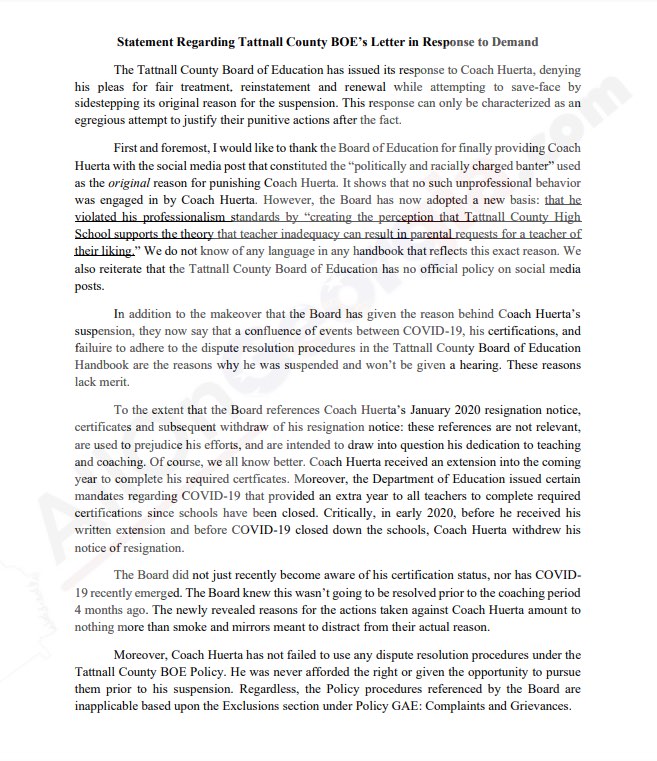 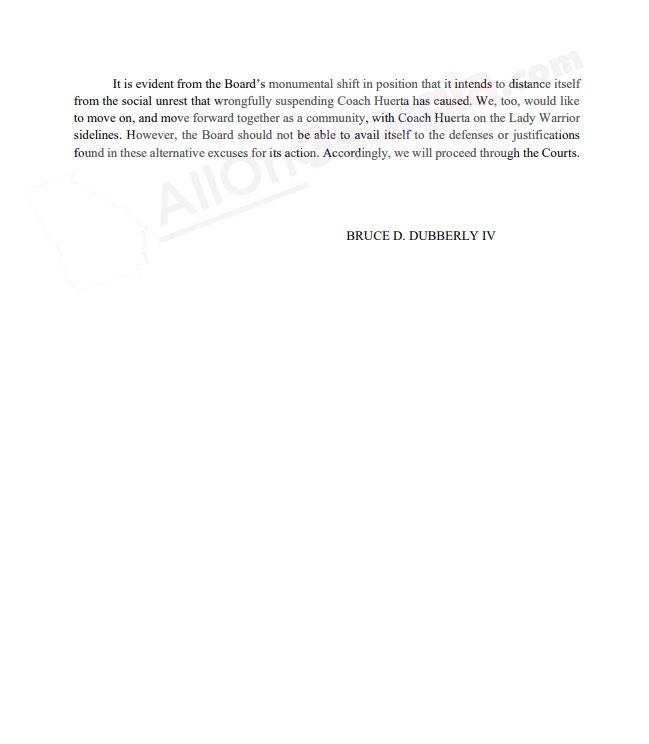