A candidate for Bryan County Sheriff is crying foul after an expose last week revealed documentation dating back years and detailed a number of domestic matters that overlapped into his professional career. 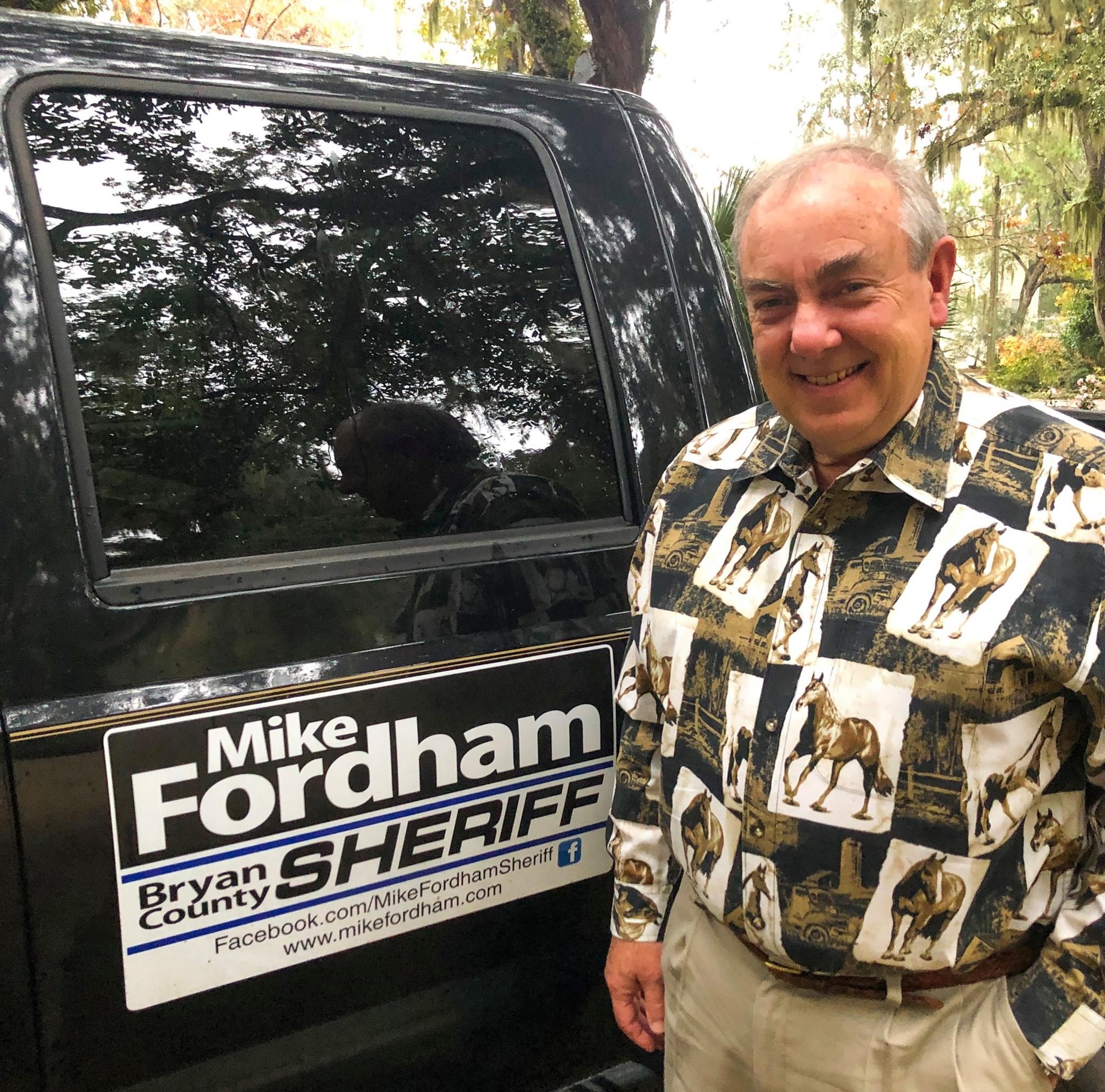 A candidate for Bryan County Sheriff is crying foul after an expose last week revealed documentation dating back years and detailed a number of domestic matters that overlapped into his professional career.

A compilation of hundreds of pages of documents show a pattern of substantiated claims of abusive behavior by Fordham, to include calls from the Fordham residence for domestic disputes, investigative findings of ‘terrorizing behavior’ documented by a Colonel at a U.S. Embassy overseas, multiple findings of aggravated sexual assault discovered during a military police investigation, and a punitive reprimand under Article 15 by a Major General in the U.S. Army.

Former Bryan County Sheriff’s Office investigator and GBI agent Michael Fordham says the claims made against him in documents held by the U.S. Army, the Georgia Peace Officer Standards and Training (P.O.S.T.), and the Bryan County Sheriff’s Office are ‘slanderous,’ include “damaging misinformation which was inappropriately released and disseminated,” and includes ‘deliberate disinformation.’ He made an official statement one week after the report full of documents was originally published.

In legal terms, slander is spoken and libel is written. Both require falsities and deliberate inaccuracies to be considered in legal terms and AllOnGeorgia’s publication on Fordham provided a detailed account of government records held in Fordham’s personnel files, among other places. Fordham now says those documents were not supposed to be released.

He refuted the allegations of various types of abuse and said the allegations made by his then-wife were made after she was served with the civil process of divorce, however, according to reports in the U.S. Army and the Bryan County Clerk of Superior Court, the accusations were first reported by a third party 17 months before the divorce process was initiated in a court of law.

Fordham contended that the charges were dismissed, but failed to mention that he was, in fact, issued a punitive reprimand under Article 15 and forfeited a portion of his salary as a nonjudicial punishment for the events.

Fordham also alleged that claims were made about his training hours while he was deployed on active duty and that he was required to seek a waiver, though no claims related to that subject matter were made in the May 18th AllOnGeorgia article.

Fordham took direct aim at AllOnGeorgia, saying the publication raised ‘substantial questions’ about him, his character, and his suitability to hold public office, though AllOnGeorgia did not pose any questions in the article, only outlined a timeline of events with supporting documentation. He called into question the ethical standards of AllOnGeorgia and said the 3,000-word report was ‘selective.’ He also asked that people “discontinue, delete, or remove” references to his family, which are referenced in the domestic dispute reports, the 911 call, and other reports as made available under the Georgia Open Records Act. Deleting such references would mean deleting the article in its entirety.

Fordham noted that, if elected as the next Bryan County Sheriff, he will personally review every Open Records Request that comes into the office and err on the side of privacy (as opposed to transparency) when he has the discretion to do so. He further stated that any employee in the Sheriff’s Office that releases documents under certain circumstances will work through the disciplinary process as necessary, a practice that has larged been discouraged under federal whistleblower protections.

You can read Fordham’s statement, which was released on May 25, in its entirety below.
The May 18th article is available in this link. Fordham deleted his campaign Facebook page after the article published last week after an unrelated political post yeilded dozens of negative comments about his continued candidacy.

My family and I now find ourselves with a unique opportunity to provide context and truth in an otherwise unfortunate situation. Of recent, you, or someone you may know, may have received a publication which raises substantial questions about me, my character, and my suitability to hold public office. I will attempt here to provide context and truth to that medium with full knowledge and expectation that the response will be critically dissected.

I categorically deny the allegations made by a former spouse. In the U.S. Department of Defense, any allegation made of a Commissioned Officer is thoroughly investigated, as they should be. Commissioned Officers are held to a higher standard than others who may fill military ranks for unto us are entrusted the lives of America’s sons and daughters. The case was thoroughly investigated, litigated, and the charges were dismissed.

The information which you may not have is that those criminal allegations were made after my former spouse was notified and subsequently served with the civil process of a divorce. Other information which you may not know is that subsequent to the allegations I served honorably as a Senior Military Analyst, graduated the U.S. Army War College in 2013, promoted to Colonel, and fulfilled a final utilization tour of duty as an advisor for Border Security, Law Enforcement, and Corrections to the Institute for Military Support of Governance. In 2018 I retired from the U.S. Army with 27 honorable years of service, at the rank of Colonel, and with the retention of my Top-Secret Security Clearance. If the allegations were true, none of this would have been the case.

Insofar as Melissa and me, we remain happily married and are raising our granddaughter. There have been significant stressors in our marriage. One of our sons, who we love dearly, is an inmate in the Georgia Department of Corrections because of convictions related to substance abuse and addiction. These events occurred after Melissa and I were married and along with other factors precipitated our petition to the Juvenile Court to have our granddaughter, who is the light of my heart, placed in our custody. Melissa is devastated by all of this and wanted me to add that she is eager to attest to the fact that there has been no spousal abuse in our marriage. I too am concerned and desire to protect my wife and our granddaughter from the damaging misinformation which was inappropriately released and disseminated.

One of the basic tenants of true journalism is to diligently seek out the subjects of news coverage to allow them to respond to criticism or allegations of wrongdoing. You should find that in their code of ethics. That courtesy was never afforded to me in the recent publication and distribution of misinformation that has occurred. One of the basic responsibilities of an informed society is to critically think about what may be reported. I find that critical thinking is sometimes hard but always rewarding. My grandmother knew this when I was a child and rumors surfaced in our neighborhood or at Church; her response was, “Consider the source.”

Nevertheless, I refuse to stand by without responding to slanderous, uninformed, and/or deliberate disinformation about my character or my family. My critical thinking skills force me to ask; who would want that done and why? It has been my experience in forty-five years of public service, routinely interfacing with media outlets, that reporters rarely “stumble” on such selective coverage as I have been afforded of late.

Similarly, the Peace Officer Standards and Training issues were reported out of context and are incomplete. Court information contained in those records are considered confidential under the Georgia Open Records Act releasable only to the peace officer to whom they pertain or to a law enforcement unit where the peace officer may be employed or seeking employment. For every deployment made in support of U.S. Contingency Operations I had to request a waiver for the in-service training hours which I was unable to complete while serving on active duty. Each request was granted, and I am eligible to seek higher levels of certification to include that required of Sheriff as administered by the Georgia Sheriff’s Association.

Now I must ask a personal favor. I have spent a lifetime defending our American values which includes Amendment I of our Constitution. However, no law can regulate our morals or our human decency towards one another. My wife and our granddaughter, both of whom I love dearly, have been drawn into this most unfortunate situation before us. With all my heart I ask of you to please discontinue, delete, or remove any reference to their lives which you may have the capacity or capability to do. Sometimes, exercising our Constitutional rights may have the untenable consequence of destroying others. If anyone is desirous of administering blame or shaming please focus those efforts toward me alone.

I am asking you to look at the complete picture and understand the context, source, and records for all involved. I regret that in this situation innocent people have been hurt by the spread of deliberately incomplete information selectively published without full context. This misinformation has caused pain for others and me. For the pain that it has caused others please know that I am deeply sorry that you have inadvertently and inappropriately been drawn into the political arena.

It is my promise to you that should I be elected your next Sheriff I will personally review each request for open records that may come into your Sheriff’s Office. Where there is discretionary release authority under the Georgia Open Records Act I will err on the side of your privacy.

Any employee who may assume that Bryan County records are personal property, may be used for personal gain or otherwise will be afforded due process in accordance with a progressive discipline system delineated in policy. I am not and never have been an unapologetic person. When I am wrong, I admit to that. As a leader I am used to seeking responsibility and taking responsibility for my actions and the actions of organizations which I have had the opportunity to lead.

I simply do not have the words to express how grateful we are to those who recognize the truth of what this has really been about, for reaching out to me and Melissa, and for your prayers for all of us. Please know that we truly treasure you and your friendship.

Lt. Governor Endorses in 14th Congressional District Race
Georgia Elections Board Votes to Allow Absentee Ballots to Be Opened Up to 8 Days Early