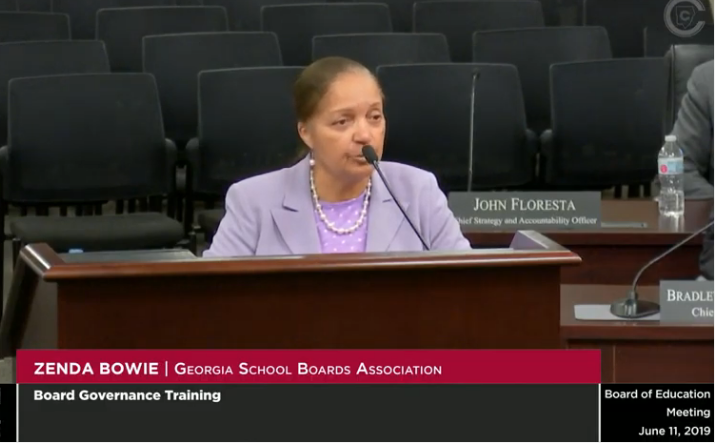 Members of the Cobb County School Board gathered Tuesday for an annual whole governance training session as required by state law. The three hour course was presented by Zenda Bowie of the Georgia School Board Association (GSBA), one of the several vendors approved by the state to provide the class. The Cobb School Board is a member of GSBA, which holds annual conferences, lobbies at the state Capitol, drafts policy, and provides resources for dues-paying school board members across the state.

The taxpayers foot the bill for the annual dues for GSBA as well as the cost for any training the organization provides.

Speaking from a prepared script, Bowie covered a number of topics ranging from the role of a Board member, to the duties of the chair, and separation of powers among personnel to ethics laws, meeting decorum, and transparency protocols.

“Let go of the need to be right” Bowie, a former school board member of 17 years herself, said as she prefaced her discussion. “I don’t know everything, but I know a lot.” But Bowie’s hours long course was full of sentiments of board protectionism more so than best practices for public service, prompting members of the public who were present for the training to post about it on social media.

Of greatest concern, Bowie told Board members that topics discussed in executive session is “confidential.” She said, “It is never to be brought out into the public. You don’t talk about who said what, how they said it, who was using cuss words…none of that comes out of executive session.” Bowie cited trust as the justification for this action.

But her statement (which is also on the GSBA ethics guide at the bottom of the article) is in direct conflict with Georgia’s sunshine laws and Open Meetings Act, which says that government entities may go into executive session to discuss a limited number of topics, not that they must go into executive session. More specifically with school board members, topics of executive session – like personnel, real estate matters, and potential litigation – may be discussed with the public or media so long as no private student information is revealed, something governed under federal law.

Executive session is an option, not a mandate, because there are justifiable reasons for an elected official to reveal what happened behind closed doors – be it a legal violation, an ethical misstep, or simply an personal choice. The idea of prohibition related to discussion after a vote is made is one that contradicts First Amendment protections and progress made for increased transparency in recent years.

When discussing official school board meetings, Bowie also made several statements encouraging Board members to follow a ‘less is more’ mantra, including:

In a discussion on personnel, Bowie told school board members to ask questions of the Superintendent and other personnel “in advance of the meeting” so superintendents and employees can do research ahead of time. “The mantra has to be ‘no surprises.’ You don’t want to surprise each other,” Bowie said. “Sometimes it’s through a presentation that a question will arise. It’s okay to ask, but it’s helpful if you make it clear that it just occurred to you.”

Later in the meeting, Bowie once again talked about no-voting Board members. “If a Board member is going to vote in opposition to a motion, that should have been made clear during the discussion. The Board member who sits, who says nothing, and then votes NO, does the Board a disservice. Remember…no surprises?”

Board members were given the opportunity to ask questions throughout the course, and they did, pressing Bowie on her experiences with other school boards in the metro area, asking for elaboration on best practices, and ‘what if’ scenarios.

You can watch the entire training here.