An examination of all of the counties in the judicial circuit revealed inconsistent victim assistance fund management, disorganized record keeping, and funds directed to organizations the CJCC does not list as certified providers.
The circuit includes Bryan, Evans, Liberty, Long, McIntosh, and Tattnall counties. 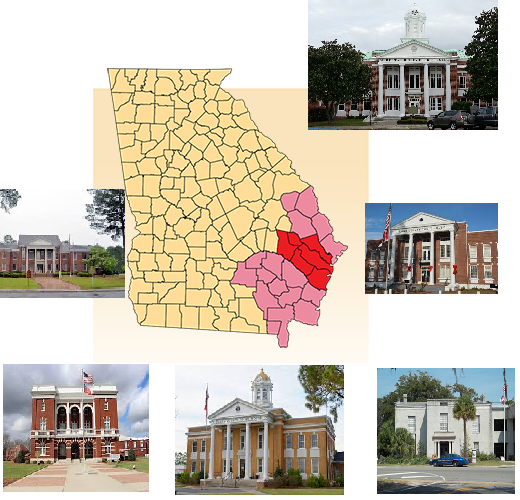 This article is part of an ongoing investigation as to how Local Victim Assistance (LVAP) funds are used in the Atlantic Judicial Circuit, which entails Bryan, Evans, Liberty, Long, McIntosh, and Tattnall counties. You can find the first article in the series here.

After it was discovered that Bryan County directs all of their money to the District Attorney’s Office to pay salaries, despite having a local, Bryan County-based victim assistance service provider in Richmond Hill, an examination of all of the counties in the judicial circuit revealed inconsistent victim assistance fund management, disorganized record keeping, and funds directed to organizations the CJCC does not list as certified providers.

NOTE: Four of the six counties in the judicial circuit do not have LVAP providers within their county boundaries.

District Attorney Tom Durden was on the Liberty County LVAP Council in 2012 when the Council unanimously voted to approve funding to four Liberty County entities – two of which are taxpayer funded – after the Council announced the importance of allocating funds to providers within the county to best serve victims. The District Attorney’s Office has since been influential in ensuring 100% of the funds from the other 5 counties go to his office.

The office claims a reduction in funds from the counties would adversely impact their budget, but records obtained by AllOnGeorgia indicate otherwise, with the DA’s office collecting more funds than any other certified LVAP entity.

The Criminal Justice Coordinating Council (CJCC) has certified 6 entities to receive LVAP funds in the Atlantic Judicial Circuit, which include:

The same Open Records Request was filed in all of the counties seeking:

Bryan County’s handling of LVAP funds are detailed at length in this article. Over the last ten fiscal years, almost $385,000 is unaccounted for, county reports to the state differ by more than $100,000, and the county routinely exceeded the state allowance for retention of allocated funds.

Despite the failure to comply with state reporting requirements by the District Attorney’s Office, the county continues to send 100% of their victim assistance funds to the office.

Evans County previously did not direct the money collected to any organization but instead left it all in a county fund. Upon learning the funds needed to be directed somewhere, a lump sum was awarded to the DA’s office and the county has been sending the funds monthly as prescribed by law. The county collects somewhere between $10,000 and $15,000 annually in LVAP funds.

The 5% of the LVAP funds permitted to be retained by the county for administrative duties is not held by Evans County either.

According to the CJCC list of certified LVAP recipients, the State Court Victim Witness Program is not an approved entity, only the district attorney’s office is as evidenced by the agency type. Additionally, most crimes related to the victim assistance are felonies in Superior Court, but it is worth noting that that the state court solicitor serves on the LVAP Council in Liberty County which designates where the funds are directed.

Additionally, much like Bryan County, Liberty County’s accounting of LVAP funds collected varies greatly from the reports sent to the state. The differences cannot be explained by retention of 5% of the funds for administrative duties as the discrepancies over a three year period total more than $140,000.

In minutes from a February 2012 meeting, the Liberty County LVAP Council, which includes District Attorney Tom Durden, noted in their approval of funds that “the importance of certified programs actually being located in the county to best offer services to victims…” was instrumental in their fund allocation. The District Attorney’s Office is located in Liberty County.

Records provided by Long County Superior Court Clerk Sherry Long indicate that 100% of the funds go to the Atlantic Judicial Circuit District Attorney’s Office from the clerk’s office. Long told AllOnGeorgia that the request for semi-annual CJCC reports was “unapplicable” because the court clerk sends funds directly to the district attorney’s office, noting that Kelly Jackson and Samantha Ashdown are fully responsible for the disbursement of the funds. The Georgia Criminal Justice Coordinating Council website says otherwise, however. This is outlined in OCGA § 15-21-132(c) excerpt details that reports must be filed by the governing county EVEN IF the funds are sent directly to the district attorney’s office.

The 5% of the LVAP funds permitted to be retained by the county for administrative duties is not held by Long County either.

The county has not reported any of the funds in their annual audits, citing it was “unapplicable.”

McIntosh has the most inconsistent recordkeeping among the six counties. The County offered only a three page ledger in response to the Open Records Request with four revenue amounts highlighted totaling $570,936.60 for FY 2015 through FY 2019. No further information was provided and the CJCC reports were not made available. .

The county attorney told AllOnGeorgia in an email in the first week of July that the money was directed to “the VAP operated by the McIntosh County Sheriff’s Department.”

$56,376.64 is used in the calculations for McIntosh below as it is among the highlighted revenue items.

100% of the funds are sent to the District Attorney’s Office every year. The 5% of the LVAP funds permitted to be retained by the county for administrative duties is not held by Tattnall County either.

Funds collected are outlined in the chart below.

Note: Total amount is lower than actual collected because of incomplete information provided. 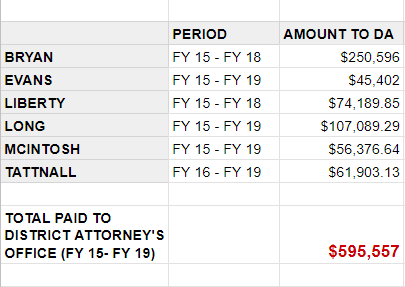 Note: Total amount is lower than actual collected because of incomplete information provided.

With conservative estimates, the District Attorney’s Office has received 73% of the total collected funds from the region in addition to the annual appropriations from both the county and state.

Of greatest concern is reports that the district attorney’s office is using the money to pay salaries instead of providing actual victim services like counseling, medical exams, crisis intervention, and forensic interviews.

An Open Records Request has been filed with the District Attorney’s Office seeking records that indicate what tangible services are being provided to victims in the 6-county radius. AllOnGeorgia will release the information once it is made available.

The Council Members of the Georgia CJCC are as follows: