The moratorium will halt land use applications for 3 months while county officials develop a Solid Waste Management Plan in the face of the proposed landfill. 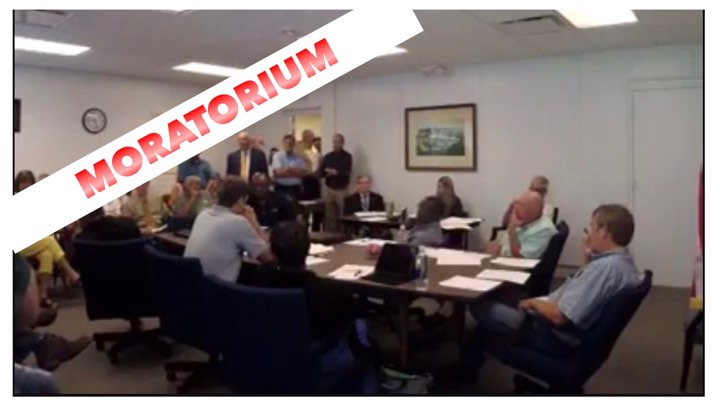 A unanimous decision by Screven County Commissioners to impose a three month moratorium on land use was greeted with thunderous applause from a standing room only audience of residents Tuesday morning. The room was full of residents opposed to the proposed landfill and spilled out into the hallway of the Screven County Courthouse.

The decision made at the regularly scheduled commission meeting came after Commissioner Mike Dixon brought up how land use regulations for the county are out of date, “very generic,” and may not protect the best interests of the county. He told fellow commissioners that the county needed to “get with the times.” The item was on the agenda as part of scheduled business for the meeting.

Dixon also said he had spoken with Zoning Director Randy Hagan and a number of ordinances have never been addressed and things are being handled on a “need to basis.” He suggested the entire ordinance be sent down to the Planning & Zoning Commission for review and recommendation, specifically conditional uses and land use.

County Attorney Hubert Reeves told Commissioners that Georgia has a very ‘robust’ law regarding Solid Waste Management Plans. The state does not require counties to have a waste plan, but it is encouraged. Rules and regulations are set by the Georgia Department of Community Affairs. He said Screven County does not currently have a solid waste management plan – the ordinance in place is out of date- and the P&Z commission would need to do a workshop and spend considerable time on the matter to make sure it is in line with state guidelines.

Reeves  was the first to mention a moratorium on applications for solid waste facilities, but said the state does not look favorably on local governments that impose moratoriums in the face of a possibility of an application being made. “They prefer that you deal with the problem. Moratoriums are put in place for a very short time,” he said. “You can’t say there is a moratorium so that there is never a filing in this county. You have to deal with the problem.”

Commissioner JC Warren said he agreed with dealing with the problem, but as the commissioner over the district where the landfill is proposed, he would not vote in favor of the landfill. The applause from the audience drowned out his comments, but he continued on to say his constituents told him that they would prefer to see an increase in taxes than the revenue from the landfill adjacent to or near their property. Warren also said he wishes the people could vote on the landfill, but referendums of that nature are not permitted under Georgia law.

Commissioner John Triplett said he didn’t want the issue to drag on with all of the division in the community, but that he did see the principle of addressing the issue.

Reeves told Commissioners, “Although you’re elected by districts, your responsibility is to the county. What’s in the best interest of the county as a whole and the people as a whole.”

Ultimately, a motion was made by Commissioner Dixon to “refer the matter to the Planning & Zoning Commissioner and to impose a moratorium for three months to allow time to develop a county-wide Solid Waste Management plan.” It was seconded by Commissioner Rosa Romeo. The final vote was unanimous.

No land use applications can be decided upon by county staff or commissioners during the moratorium. Commissioners will likely receive a report with recommendations at the October meeting and decide what the next steps are.

Atlantic Waste Services VP Ben Wall was in attendance as well. At the end of the meeting he told Commissioners that the County had a Solid Waste Management Plan, but that it was out of date by one year. He also said that, as part of the host agreement proposed the county, AWS would provided annual clean up assistance for derilict properties that are an eyesore around the county.

You can watch the entire Commissioner’s Meeting in the video below. The discussion on this solid waste begins just after the 16:00 mark.