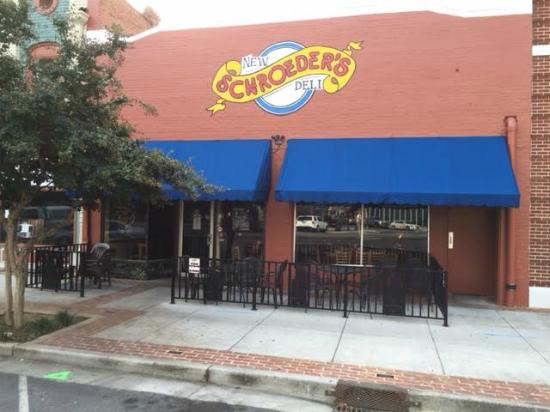 And now, as famed news commentator Paul Harvey used to say, for the rest of the story.

Schroeder’s owners, brothers John and Charlie Schroeder did not seek out Mrs. Abrams, nor did they initiate the town hall meeting.  “A city commissioner approached us and asked about using our courtyard area out back to have the event,” said John Schroeder. “The season for outdoor concerts is pretty much over, so the area was available and we agreed,” he continued. Schroeder noted that it wasn’t about his or his brother’s political leanings, “Even in our family, some of us are Democrats, and others are Republicans. It’s not something we waste a lot of time fighting about. It just happened to be one side that approached us before the other,” he continued.

Having run a business in downtown Rome since 1981, Schroeder is familiar with the leadership of the town. “We know all of the City Commissioners,” said he said. “Had it been someone from the other side to approach first, then it would have gone the same way.” In fact, in an effort to make sure that both sides could be represented, the Schroeder brothers walked just down the block to the Floyd County Republican headquarters to find out if Republican candidate, current Secretary of State Brian Kemp could appear also. Thus far, Kemp’s side has been unable to nail down a date to appear in Rome because Mr. Kemp has been spending extra time in South Georgia following Hurricane Michael. “We’ve talked to them a few times, and hopefully we can get something scheduled this week or next,” said Schroeder.

The Schroeder’s have always seen their restaurant as a place where people can come and forget their differences while enjoying a meal. “We’ve been here for almost 40 years now, and we hope to be here for a long time to come.” he said. “We have always done our best to have a place where everyone can feel welcome. We would hate for politics to ever be a reason that somebody would not come in.”