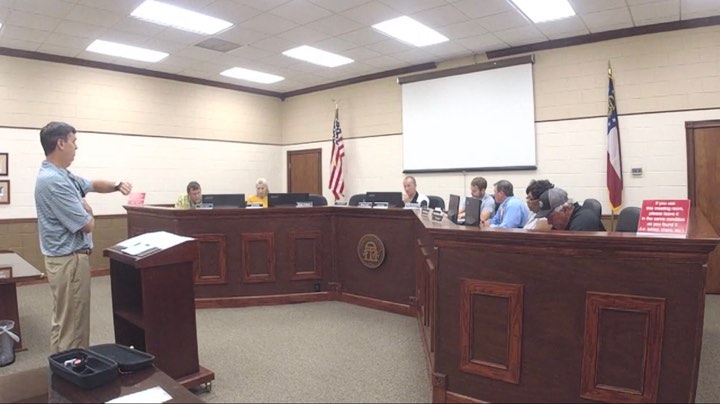 The Evans County Board of Commissioners* denied a funding request from the Claxton-Evans County Chamber of Commerce Tuesday night during a meeting called specifically to discuss the appropriations. The denial came after a motion to award $19,500 failed to garner enough votes to pass.

The Chamber of Commerce submitted a budget request to Commissioners last month in the amount of $19,500, which would match the amount contracted with the City of Claxton and also exceed the appropriated amount sent to the Economic Development Authority. A number of Chamber board members were present for the meeting to express their support of the request and express a need for funding.

Presenting on behalf of the Chamber was Chamber President Caughey Hearn. Hearn, a former County Administrator for Evans County, said that the Chamber has been in a city-county-chamber partnership for 17 years. Hearn said the Chamber’s mission is to provide “promote business, cultural, civic, and educational growth” in the community. Governments are not able to ‘donate’ funds to private entities, like a Chamber of Commerce, but they can enter into a contract with a substantial benefit or in exchange for services. The City of Claxton pays the Chamber $19,500 annually to serve as a Welcome Center for the City and for marketing tourism. The Chamber asked Commissioners for the same amount for the same services to bring the collective funding to $39,000 for the Welcome Center and the marketing of tourism. It was stated that those are the only two services the county can legally contract out to the Chamber due to the existence of the full-time Economic Development Authority.

Hearn also cited ‘a typo’ in the budget previously proposed to Commissioners, stating that health insurance was $5,000 annually, not $50,000, and stated that the change did not impact the projected expenses for the budget. Hearn also said the Economic Development Authority (EDA) volunteered to pay rent and expenses to the Chamber in the amount of $6,996 to offset expenses of the Chamber. The Chamber, in July of 2019, had to sign a lease with the City of Claxton after it was discovered that the City was wrongfully donating the building to the Chamber for free without an exchange of services.

Chairman Brian Croft asked Hearn if it was true that the EDA paid the Chamber $1,000 per month. Caughey said that was not true. “There is no funding to the Chamber right now. There’s only cost sharing for expenses and reimbursement,” Hearn told Commissioners. Croft asked if the EDA was paying a salary to Chamber Director Tammi Hall. One board member said she received $500 per month in the interim ‘when she was filling in’ after former EDA Director Katie Griffin left and the EDA was seeking a new director. Hearn then said the EDA voted to pay Hall $500 per month during the gap to also help during the transition of new EDA Adama Kennedy. He stated the EDA approved the funding in March 2019 but did not start paying until July 2019.

NOTE: At a July 2019 EDA meeting,  Claxton Mayor Terry Branch, who serves on the EDA, made a motion after executive session to increase Hall’s pay for clerical services provided to the EDA.  It passed with the full support of the EDA, but the amount approved does not match the amounts cited by chamber board members in the meeting Tuesday night.

Croft also said he would like to see the Chamber improve their website because the site is “way behind” and businesses appear on the site that have been gone for years. Hearn told Commissioners that the Chamber has had a hard time finding vendors who will build a good website and keep it up. “We realize the importance of having a good website,” Hearn said.

During his line of questions, Croft said “Chambers are built by businesses, for businesses, to promote businesses – no government affiliation.”

County Administrator Casey Burkhalter tried to streamline the discussion by asking Commissioners to focus on what their expectations would be of the Chamber in exchange of the $19,500. “What do you want in a Welcome Center? What terms? What will you fund?”

Commissioner Jill Griffin prefaced her perspective with a personal comment. “This is not the county that is against the Chamber. I have been a supporter of the Chamber for a long, long time. We did not just decide to quit funding the Chamber. We were told that we could not fund the Chamber because the EDA was a duplication of services…We’ve reached out to some other counties and most give to the EDA and Chamber funding comes through the EDA. The umbrella just needs to be changed.”

Hearn told Griffin that the funding doesn’t legally have to flow through the EDA. “I know that was a concern – the legality.” Griffin said that if the legality matter was resolved, the Commissioners needed to determine how much value the Welcome Center has and what they are willing to pay for the service.  She also noted that all of the county departments had seen budget cuts in recent years because of rising costs.

Appealing to the personal opinions of the Commissioners, Hearn asked if the Chamber provided a $19,500 value to the citizens of Evans County. “That’s what it boils down to. To me, that’s a resounding yes. My involvement in the Chamber and my time sitting behind that table where you guys sit (referring to his time as county administrator), one thing I always said is that the funds that the county has given to the Chamber for services is some of the best use of taxpayer dollars that the county can spend.”

Commissioner Tony Lewis cited the training he’s attended as a new commissioner and the impacts on the legal side. “I don’t mind funding something that is done for the county. I also don’t want to spend any money that we’re double doing. Do I think the Chamber does $19,500 for the citizens? Of course, but is it $19,500 of county money?” He also cited concerns over the possibility of misuse of funds or a lack of accountability when the money is sent somewhere with no accounting.

Croft asked why the EDA cannot fund the Chamber with the reserves, which Hearn said is a long term plan, but “doesn’t solve the short term issue and problem of the Chamber being able to continue.” He also said he did not feel it was appropriate to ask the EDA for funding. A chamber board member who did not identify himself stated that the budget had been the same for 17 years, but no board member offered an explanation as to how the Chamber filled the $19,500 gap in FY 2016, 2017, 2018, and 2019 without the county funding.

Griffin said that she did not have a problem with the funding if it was legal.

Citizen Robert Hodgson was given a chance to address the Commissioners and stated, “The Chamber of Commerce receives money from their members and any functions they put on during the year. I don’t think the burden should be put on the taxpayers to support extra monies that they’re asking for. They’re coming to you for the money, but in actuality, you’re taking our money from us as a taxpayer. If they need to do more fundraisers during the year, more events, they need to do it. It’s not right.”

Hearn said the question remains as to whether or not the $19,500 offers a return on investment. Croft aske if Hearn could answer that. “There’s no economic study that’s been done, but I can give you my opinion. There’s no question.” He also asked if something changed from ‘this year’ to previous years that led to an issue, again not noting that the county has not funded the Chamber for three and a half fiscal years.

A motion was made by Commissioner Irene Burney to sign the contract for $19,500. Commissioner Tony Lewis seconded the motion, stating he was seconding ‘for discussion’ which is a procedural rule.

Commissioner Wesley Jenkins said the decision was a difficult one for him. “I have fielded many many calls and texts. None of my constituents want me to support this. I do believe that y’all are a valuable asset.”

“You’re only gonna hear from the naysayers. You’re not gonna, the supporters aren’t gonna all call you to tell you they want you to do something. A lot of times there’s an expectation there. You’re only going to hear the negative,” Hearn told Jenkins.

“But I am hearing from the people that put me in this office. They’re the ones that put me in here,” Jenkins replied to Hearn. Another unidentified Chamber board member asked Jenkins “where was their voice 10 years ago.” Continuing, “This funding has been consistent for at least 17 years so all of a sudden this got brought to light now, they’re pitching a fit.” No one clarified that the funding stopped three years prior. Hearn turned to the Chamber Board members in the audience and asked if any of the people lived in Commissioner Jenkins’ district and also supported the county funding the Chamber. Two people raised their hands.

Hearn then turned back to Jenkins and said, “I know you made the statement that none of your citizens want this. There’s some.”

“Well, they’d be idiots if they didn’t. I mean, they’re sitting in the room,” Jenkins told Hearn, which was met with, “Well you made the statement, but there are some who do want it.”

Melissa McLendon asked if any Commissioners reached out to citizens who did not call them to see how they felt about the funding. Jenkins said he had.

Martin Waters, who is on the Chamber board, spoke from the audience to cite two ways the Chamber has, in his opinion, helped the community. Waters said that the Chamber provided a service that would have otherwise been paid for by taxpayers and it offered a return on investment to the Board of Education. He did not say whether the BOE had considered contracting with the Chamber to provide funding, but the entity has not done so in recent history.

Board member Patsy Rogers also interjected her comments stating that without the Chamber, there would be no one to organize the upcoming ribbon cutting at the Public Fishing Area. “The community will suffer,” Hearn said.

After more than an hour of discussion, Croft called for a vote. Burney was the sole aye vote, with Commissioners Griffin, Jenkins, and Lewis voting no. Griffin said her reason for opposition was that the budget for FY 2020 was already approved. The meeting was promptly adjourned, but Hearn had one final comment for Commissioners. “We appreciate your consideration and I feel like you’re making a grave mistake.”

*Commissioner Shela Holland was not present at the meeting.

You can watch the meeting here:

Special-called meeting with the Evans Commissioners over Chamber of Commerce funding. Members of the Chamber Board are present.