Claxton Council Vote on FY 2019 Budget Was Not Unanimous, Disputes Over Animal Control

The Claxton Council voted Monday night to approve the upcoming fiscal year budget which begins on July 1. Though Council held multiple workshops to discuss the appropriations to different departments ahead of the approval, the vote was not unanimous. 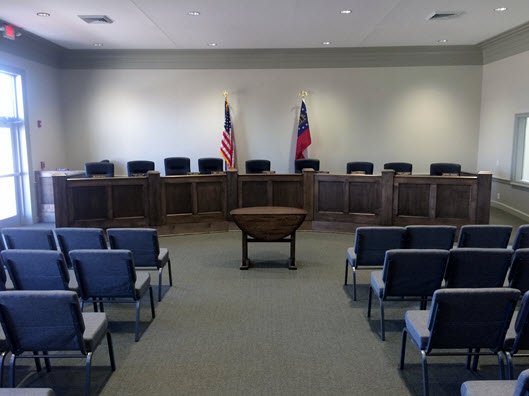 The Claxton Council voted Monday night to approve the upcoming fiscal year budget which begins on July 1. Though Council held multiple workshops to discuss the appropriations to different departments ahead of the approval, the vote was not unanimous.

A public hearing was held on the budget at 5:30 p.m., just ahead of the regular council meeting set for 6:00 p.m. when council was expected to approve the budget in its entirety. AllOnGeorgia was not notified of the public hearing date or time, though the local newspaper was present for the hearing. Members of the public were welcome at the meeting, but were not present.

The public hearing adjourned with no public comment and Council went into the regular council meeting.

Interim City Administrator Carter Crawford told they mayor and council that the budget was balanced and very “slim.” He provided budget assumptions (at the bottom of the article) and a budget summary.

Councilwoman Lisa Perry asked if every department increased in expenditures with the exception of animal control.

Crawford confirmed that all departments increased because of “pay increases and insurance.” Perry then asked why the animal control budget was cut.

“Well, I think it was cut because we weren’t spending the amount we had in previous years, so we cut it back $1,500,” Crawford told Perry. Currently, animal control is handled by Fire Chief Harold Rogers.

A city employee sitting in the audience added that the animal control budget was higher in FY 2018 because that’s the year the department was established and there were costs associated with starting an animal control program, most of which were one-time expenses.

“I understand that. I was just wondering why the total budget was cut, because we didn’t use the funds? Is that what you’re saying?” Crawford only repeated what the previous city employee said. Perry was trying to clarify if all the money spent in FY 2018 was spent by the department, but Crawford did not answer the question.

“We seem to repeat ourselves in telling the community we can’t do things for animal control because we don’t have the funding, so that’s just what I’m trying to clarify,” Perry told her fellow councilmembers. “What is the real issue?”

Rogers said he spends a good amount of his time handling animal control issues, “more than anything else.” Rogers is the only employee with the animal control department, but said it could be a full-time position on its own. “So there’s a need, from the community,” Perry said. “What’s the solution to this?”

Crawford said there was an error in the General Fund revenues as well as issues with the software, so expenditures were reduced across the board, though it was not clear if that response answered Perry’s question. “We had to change some revenues in the General Fund in order to balance out,” Crawford told her.

Police Chief Dale Kirkland said citations are issued but there are not enough to self-sustain the operation. “It’s a huge expense versus what’s brought in. If people can’t afford to take care of animals, nine times out of ten, they can’t pay a ticket.”

Perry said she is in conversation with Statesboro and Metter on how to partner with them to provide better animal control services. “Again, I’m going to reiterate that we have spectators that come here to talk to us about this, it’s a continuous problem, always has been, and that budget is cut while others are increased,” Perry said.

Mayor Terry Branch said only $2,500 was used in FY 2018 so the council appropriated more than what was spent last year, which raises questions on the actual expenditures of the previous year’s budget.

Perry requested that Rogers provide the council will a monthly report on animal control activity. He said he would begin providing that information at the meetings.

There was no other discussion and the mayor called for a motion to approve the budget. It was made by Risher Willard and seconded by Larry Anderson. The vote was 6-1 with Lisa Perry dissenting.