The lawsuit seeks $5 million in damages, plus $55,800 per day for each violation it lists, plus attorneys fees, and an injunction against continued violations. 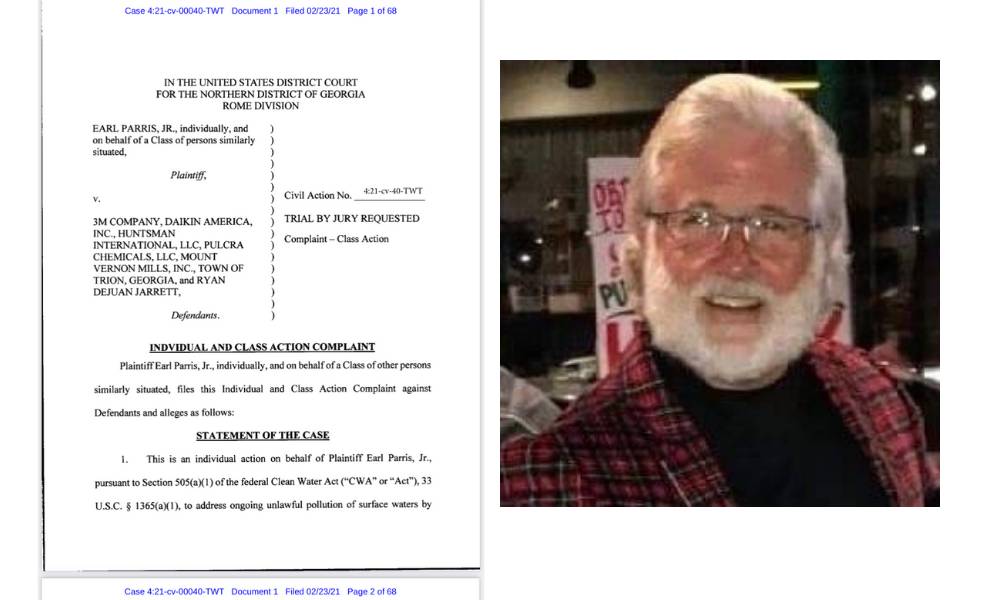 Earl Parris, who served two years on the Summerville City Council in the 1990s and again for four years ending in 2020, is suing Mount Vernon Mills, the Town of Trion, Ryan Dejuan Jarrett, 3M, Daikin America, Huntsman International, and Pulcra Chemicals over a water crisis that forced the City of Summerville to distribute bottled water for weeks.

Parris wants the people responsible for the contaminated water to cover the cost of a long-term solution, The Chattanooga Times Free Press reported.

Back in February of 2020, the EPA notified the city of Summerville that some of the town’s drinking water had chemicals in it that have been linked to serious health problems, known as PFOA and PFOS.

That forced the city and its residents into a water crisis. The city provided bottled water for several months.

The suit was filed in U.S. District Court for the Northern District of Georgia.

The lawsuit seeks $5 million in damages, plus $55,800 per day for each violation it lists, plus attorneys fees, and an injunction against continued violations. (Scroll down to read the full lawsuit).

After installing the GAC filters at the Raccoon Creek treatment plant, PFAS/PFOS concentration levels through the system are safely below the health advisory threshold.

Clearing sediment from the test well during construction.

The City of Summerville first test well is producing 600 gallons (the max capacity of the pump used for testing) of water per minute (GPM) at a depth of 364ft. This well will still need to be developed into a production well, and then connected to the City of Summerville water distribution system upon approval from Georgia EPD. The engineers send plans and specs to the Georgia EPD for approval of all phases of the project.

How much has it cost to build the new well so far?

To reduce the overall cost of the project, the City has self-performed the installation of 2,000 feet of a 16” water line on Filter Plant Road. Another delivery of 4,000 feet of 16” pipe is expected by September 1st.

How much more is it expected to cost to complete the well?
The cost of a production well is undetermined because this will be a bid process. The City is actively pursuing multiple grants and funding for a permanent production well, along with procuring property for additional well sites. Final costs are not known at this time. There is no estimate on the completion date.

16″ water pipe being delivered for installation.

Funding of the remaining 16” water pipe to the well site is also being pursued.

Carbon Based Pilot Study for Removal of PFOA/PFOS
The City of Summerville is working with a pilot study using carbon as a removal method of PFOA/PFOS at the Raccoon Creek Water Treatment Plant. This system is referred to as granulated activated carbon (GAC). Test results have been promising. As of October 5th, installation has begun on the new GAC filters for Racoon Creek. The goal is to complete the installation within 3-5 days of starting installation. Once the filters are installed, samples will be collected and tested by a state certified lab.