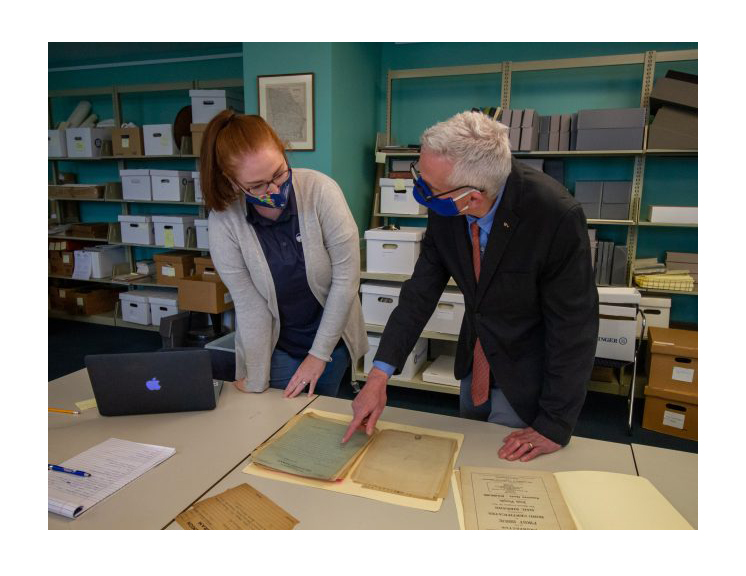 A collection of historical documents was gifted last fall to the Center for Irish Research and Teaching at Georgia Southern University. Students and faculty will be able to utilize the documents in their research about the history of the Irish in Georgia.

This year marks 100 years since the signing of the Anglo-Irish Treaty, which eventually would establish Ireland as a republic, and Georgia Southern University undergraduate student Caitlyn Hudson is getting a first-hand look at some historical documents that chronicle U.S. efforts to help establish Ireland’s freedom from British rule.

Hudson is researching a collection of documents called the Lawless papers, which follow Virginia-native and Irish descendant Joseph Thomas Lawless’ involvement in the southern leg of an extensive U.S. tour by Éamon de Valera, a prominent political leader in Ireland’s history.

“My favorite part of working on the project has to be the physical work with the documents,” Hudson said. “It is fascinating to see primary documents in hand rather than online. It provides a unique form of analysis.”

The collection, which was gifted in Fall 2020 to the Center for Irish Research and Teaching (CIRT) at Georgia Southern, includes letters, advertisements and more that document an important narrative in modern Irish-American history, according to Howard Keeley, Ph.D., director of CIRT.

“These documents shed significant new light on how Ireland perceived Savannah and our region at a critical time in Irish history: that nation’s War of Independence from 1919 to 1921,” Keeley said. “The collection helps us understand the network that Éamonn de Valera and other future leaders of an independent Ireland sought to build in the American South, using as one anchor the sizable and active Irish-American community in Savannah.”

All of the Lawless papers were either written or received by Lawless, the son of immigrants from County Galway, Ireland. Lawless was involved in arranging southern stops on de Valera’s tour, which included a stop at the Chatham Artillery Armory in April 1920, in an effort to raise funds for the self-proclaimed Republic of Ireland.

Lawless, who would go on to become a lawyer and prominent political figure in Virginia, was also very devoted to Ireland and involved in several prominent Irish-American organizations, including the Friends of Irish Freedom (FOIF), which advocated for political independence for Ireland.

“De Valera’s fundraising tour of the U.S. is among the most important episodes in modern Irish-American history,” said Keeley. “The collection sheds significant light on how FOIF used the tour to advance a southern strategy. Clearly, Judge Lawless was key to those efforts.”

Keeley also pointed out that in time, de Valera would become prime minister, and then president, of an independent Ireland, dominating the country’s politics for decades.

The collection was gifted to CIRT by direct descendants of Lawless and is now housed in the special collections section of the Zach S. Henderson Library.

“We are honored to be granted stewardship of these documents,” said Autumn Johnson, special collections librarian at Zach S. Henderson Library. “Having increased opportunities for Georgia Southern students to examine rare, one-of-a-kind collections, such as the Lawless papers, enriches the learning experience, particularly for our undergraduates.”

Hudson said her work on the project has allowed her to fully understand the various aspects of potential careers she can pursue, as well as narrow down specific goals for her graduate school journey and beyond.

“This type of work is generally done by graduate students, and it is amazing to know that I am able to gain experience in a field while an undergraduate,” said Hudson. “It has allowed me to learn career-relevant material earlier on and in turn has allowed me to better prepare for graduate school and my overall future goals.”

Keeley added a collection like the Lawless papers allows students and faculty to conduct research on high-value primary source documents. The collection will also help further CIRT’s ongoing mission to increase research productivity, particularly with respect to the history of the Irish in Savannah and the state of Georgia.

“The Irish experience in the south is open to much more study than has thus far been attempted,” Keeley said. “The generous gift of the Lawless papers to the Center for Irish Research and Teaching significantly enhances our drive to conduct meaningful research. For undergraduate students, such as Caitlyn, the opportunity to uncover knowledge by analyzing primary-source documents brings new levels of rigor and satisfaction to the college experience. And for our program, this collaboration with the Special Collections unit of University Libraries is a powerful way to honor our donors’ trust in us and, in addition, celebrate Irish heritage, especially around St. Patrick’s Day.”