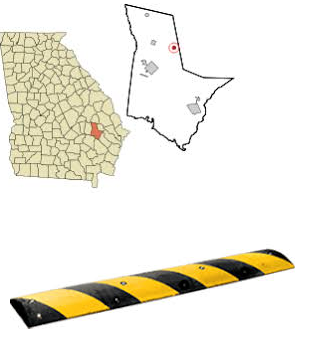 Officials in the City of Manassas hosted a workshop Monday evening to hear feedback from the community on the newly-installed speed bumps.

County residents from both Evans and Tattnall have taken to social media in recent weeks to post their dissatisfaction with the new speed bumps installed on Henry Street in the middle of town. City officials say they have fielded a number of calls and emails from people outside of the community who frequently travel the road as a shortcut, which is bookended by Highway 280 and Highway 292. Among other complaints, drivers say the speed bumps are too high, difficult for large trucks, and an obstruction for emergency personnel.

But elected officials in the city have different thoughts.

There were not enough council members present Monday for a quorum, which means that no official business could be conducted, but Mayor Wanda Rogers and council members Shawn Edwards and Tonya Edwards said they wanted to hold a work session in the event that community members wanted to ask questions or vocalize their opinions based on all of the inquiries and commentary since the installation.

Prior to the start of the meeting, a verbal altercation ensued outside of city hall with an Evans County resident who had come to discuss the speed bumps and a potential litigation matter. He approached the Manassas city officials, who also had family members present, and the situation continued to escalate. Ultimately, the Tattnall County Sheriff’s Office was called, though the parties from Evans County – as well as the family members – left before law enforcement arrived. No one else from the community, however, was present at the meeting.

Council members gathered for twenty-five minutes, discussing minor issues about speed limits signs and other measures before AllOnGeorgia was given the opportunity to ask questions about the speed bumps.

AllOnGeorgia: Could you elaborate on a few of the issues that occurred that led to the installation of the speed bumps?

Councilwoman Tonya Edwards: People go through here, they hit the railroad tracks and think it’s a drag strip to the school. Every house on this road {referring to Henry Street} has a child, except for Casey. Everybody has children. And they play on the sidewalk. People come through here…and it’s a shortcut and this is a strictly residential area. We can’t afford a police department so to enforce it, the best economical way to try to enforce our speed limit was to put down two speed bumps.

Councilman Shawn Edwards: I have a neighbor who had asked if there was anything that could be done to help with the problem. And me and my daughter ourselves, we were walking one morning and we had a car come across the tracks as fast as she could and she was texting and came up on the sidewalk. I had to push my daughter out of the way.

AllOnGeorgia: Is there a weight limit on big trucks for Henry Street?

Tonya Edwards: The limit is that there isn’t supposed to be anything bigger than 2 axles. That is a city ordinance. The big trucks, we tried to stop them, but we can’t.

She did note that the trucks have made an effort to slow down, especially now since city officials have tried to reach out to the companies and ask that they not use the cut through.

AllOnGeorgia: How fast do you think drivers are traveling?

Tonya Edwards: I would say over 45 mph.

AllOnGeorgia: How do the people who live on the street feel about the speed bumps?

Tonya Edwards also said the speed bumps were installed by a contracted company after they were ordered from a traffic safety equipment company that ensures compliance with road conditions and state and federal standards. Additionally, they took into consideration the impact it would have on emergency personnel, officials said.

Shawn Edwards said people have been blowing their horns as they pass over the speed bumps as a protest, promised to pull the speed bumps up at night, and even threatened to light them on fire since they were installed. “They don’t understand because they don’t live here,” he said.

So, for now, the speed bumps will remain. City officials are also considering reducing the speed limit on Henry Street.