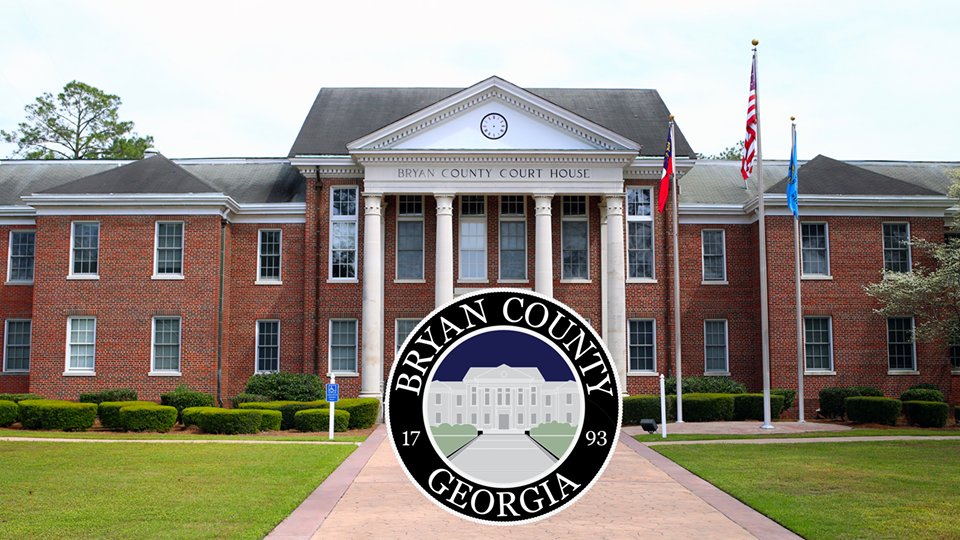 Hundreds of pages of documentation from a number of government entities in Bryan County indicate that money dedicated by state law to fund services for crime victims through the Local Victim Assistance Program has been mismanaged, improperly utilized, and – in some instances – entirely unaccounted for.

Over the last ten fiscal years, almost $385,000 is unaccounted for, county reports to the state differ by more than $100,000 over a 10 year period, and the county routinely exceeded the state allowance for retention of allocated funds.

For reference: Bryan County is in the Atlantic Judicial Circuit which encompasses Evans, Liberty, Long, McIntosh, Tattnall counties and has elected district attorney Tom Durden to serve as the chief prosecutor since 1998.

Background on the Victim Assistance Fund Under Georgia Law

The Local Victim Assistance Program (LVAP) was created by the state legislature back in the 1990s as a way to increase access to services for victims of crime. O.C.G.A. 15-21-131 provides funding for local victim assistance programs through the assessment of additional fines on criminal citations and criminal ordinance violations in the amount of 5% of any total fine amount. Any money collected off of this 5% program is supposed to be paid on a monthly basis to the victim assistance program in the county where the crime was committed so long as the provider is approved by the Georgia Criminal Justice Coordinating Council (GCJCC).

Additionally, OCGA 15-21-134 further reads that any person whose duty it is to collect and remit the sums provided for in this article who refuses to do so shall be guilty of a misdemeanor.

The county commissioners are responsible for determining where all of the LVAP funds go, regardless of whether the money is collected by the county courts or by a municipality’s court.

Bryan County has a GCJCC-approved victim service provider with The Cottage House in Richmond Hill. Trinity Ingram-Jones is an advanced-practice forensic nurse and nurse practitioner and the only medical-forensic service provider in the judicial circuit. She focuses on child maltreatment and sexual assault victims. It is the only victim service agency in Bryan County that is certified by the state as it assists victims 24/7 and 365 days per year. The provider is across the street from the Richmond Hill Police Department.

Five other organizations in the judicial circuit provide some combination of services for victims, but none as comprehensive as The Cottage and no others call Bryan County home.

For this reason, Bryan County LVAP funds are supposed to be directed to The Cottage House as the only GCJCC-sanctioned provider in the county – not the district attorney’s office – after a vote by the county commissioners. State law requires the funds be directed to the program(s) at the end of each month.

Where Is the Money for Victim Services Going?

Records indicate that the county is not in compliance with the law and it was not until The Cottage requested an allocation of the local victim assistance funds that the mismanagement was brought to light.

The Bryan County government says it sends 100% of the collected 5% funds to the district attorney’s office every month, but documents obtained in an Open Records Request indicate that not only is money unaccounted for, county reports conflict with state reports and official county audit reports as to how much was collected and expended on an annual basis. County officials said in emails that the numbers are usually “off slightly” due to collection timing, but there is no explanation for why the district attorney’s office says it is not receiving all of the money dedicated. Bryan County also lacks locally-held records of the semi-annual reports required for submission to the GCJCC which outline the total amount collected and how funds were used.

The first chart illustrates the reporting discrepancies between Bryan County, the county audit, and the state.

Of note for the second chart, state law caps how much money the clerk of the county can retain for the county at 5% at 5% for administrative duties of administering the funds, but records show the audit report exceeded the 5% repeatedly. Additionally the county reported to the state that it kept $0. 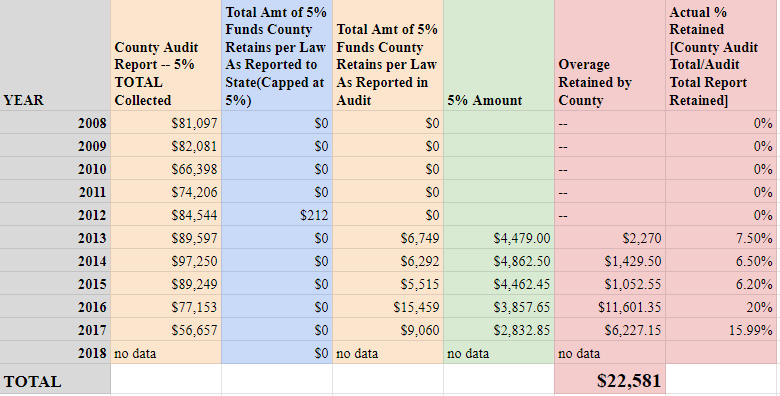 This email from August 2018 shows where Finance Director John Rauback said 100% of the money goes to the district attorney, though there is no contract or Memorandum of Understanding (MOU) outlining terms and services provided by the DA with the LVAP funds. 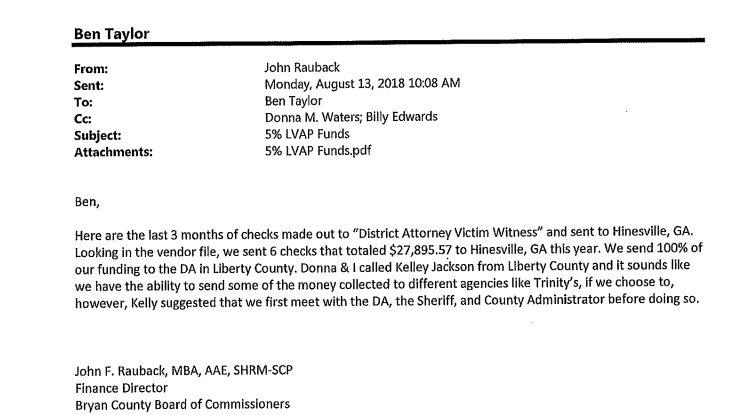 Rauback wrongly states that the county has the ability to ‘choose to’ allocate the funds some place other than the district attorney’s office.

In the years before The Cottage was operational, the district attorney’s office failed to show how the money was used for victim services.

Where are the victims going?

As the only certified provider in the county, records show The Cottage formally requested a percentage of the victim assistance funds from Bryan County for services in August 2018. Though the money is supposed to be allocated to the LVAP provider at the end of every month, the money has continued to go to the district attorney’s office for the last 10 months.

On a number of occasions, these local law enforcement agencies have driven victims upwards of 4 hours roundtrip to Waycross to see another provider – all at taxpayer expense. The distance can also mean victims do not have any follow up care, especially if they are children or low-income adults. Victim advocates in the region say outsourcing to other counties makes it hard to provide continued services for victims – especially those who often don’t have insurance, to apply for grants based on patients served in the area, and it defers law enforcement resources out of the county for transport.

In the event that the victims are not sent out of Bryan County for care, they are often times receiving no care at all because the County, in a coordinated agreement with the Sheriff’s Office and the local police departments, has removed The Cottage House from the referral list.

Coordinated Retaliation for Inquiries into the Handling of Funds

A slew of Open Records Requests shows that after a request for a portion of the LVAP funds (currently going to the DA’s office), the county negotiated a new MOU for referrals with a Liberty County provider, which removed The Cottage and Trinity Ingram-Jones from the service agreement. This impacts the Sheriff’s Office referrals as well as those by the local police departments and was done without public announcement. The MOU essentially guarantees that local law enforcement will transport victims out of the county for care, which negatively impacts both the county and the local nonprofit’s abilities to apply for grants. While the MOU does not impact the LVAP funds, the transport out of the county does not relieve the local governments of their duty to follow state law for LVAP funding.

The County Commissioners recently appointed a 7-member LVAP Advisory Committee to decide which of the six providers in the judicial circuit will receive LVAP funds and in what amounts, despite the state law requiring the funds go to the providers within the county. The list of Bryan County providers remains at one. The advisory committee met for the first time at the end of May, but has not directed any funds which means the district attorney’s office continues to receive 100% of the funds.

Below is an excerpt from the February 2019 Commission meeting minutes. The minutes incorrectly refer to the program as the “Local Crime Victim Witness Program,” not the Local Victim Assistance Program, and wrongly cite state law. 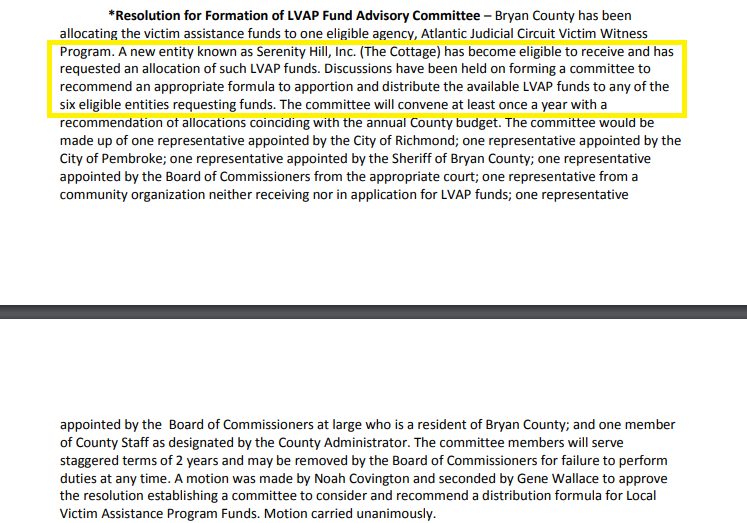 This is an ongoing investigation by AllOnGeorgia.