The Financial Incentives for Private Landfills to Take Coal Ash 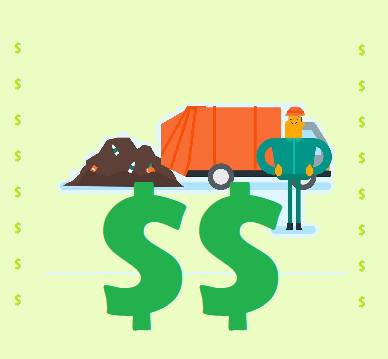 How Does a Landfill Make Money?

Amid the controversy of the proposed landfill in Screven County slated to serve the entire coastal region, a number of citizens have asked how landfills generate income in line with the promises made to citizens and the county government at a host of public information meetings.

In most counties, landfills – and trash services in general – are a sunk cost. Counties like Appling, Candler, and Evans report losses on their service provisions and the sustainability factor rears its head at least annually as commissioners evaluate budgetary needs. While government-run landfills must first meet the needs of taxpayers, private companies can cater the landfill to the needs of the bottom line.

In Screven County’s situation, a private company wants to have the ability to establish a landfill – Green Meadows Solid Waste Disposal and Recycling Facility – and the players behind the idea say it will benefit the county and its citizens financially and economically. Atlantic Waste has promised that the ~84 acre landfill will employ 8-14 people with combined salaries of $750,000, offer free local disposal up to 25 tons per day (as a community), provide recycling services on site, and $1.8 million in annual host fees for the county, totalling $60 million over the life of the landfill, according to the Screven County-focused website by AWS. Additionally, a trucking facility to employ 30 more people is a possibility and would bring the full investment total by the company to $23 million.

So where does the money come from to not only offset start up costs for a new facility – officially referred to as a Municipal Solid Waste (MSW) facility – but to compensate local governments?

Among the most obvious revenue streams are tipping or gate fees. These charges depend on the actual weight or tonnage of the waste dumped and can vary according to the material being dumped.

While public landfill fees are set by county governments, private landfills set tipping fees based on competition and proximity to other landfills. If there are more landfills in a given area, tipping fees are generally lower than an area with fewer landfills. The fees paid to landfills, however, have been steadily increasing year after year and continue to tick upward faster than the rate of inflation.

Host fees paid by private companies to the local governing authority are mandated by the state and Georgia recently amended the fees for certain products at the request of Georgia Power lobbyists, ultimately incentivizing landfills to accept non-hazardous waste outside of household garbage.

Additionally, the local and regional tonnage of household garbage would not be enough to sustain a landfill, which is why so many private landfills accept waste from out of state.

In 2017, landfills in the Northeast remained the most expensive in the country averaging $79.30 per ton, followed by $57.90 in the Pacific, $52.70 in the Midwest, $43.60 in the Southeast and $35.70 in the West. The biggest increase in fees, however, was in the southeast because more northern states are sending waste to southeastern states. The low cost per tonnage coupled with the large landfill size with space remaining are incentivizing these practices.

Georgia has been named ‘the dumping grounds’ for out of state coal ash dumping, specifically from Florida and North Carolina. According to Georgia EPD, the MSW landfill in Banks County, which is privately owned and would operate much like the proposed MSW in Screven, has received 6.7 million tons of coal ash in the last several years. Coal ash is still being imported into Georgia, too, as the Banks County and Charlton County facilities are expected to bring in another one million tons of coal ash in the next year.

According to Waste360, six MSW landfills in Georgia take coal ash, receiving 1,5 million tons in 2017 alone. Five of these landfills commingle coal ash and household garbage. Little to no research has been done on the interaction of coal ash with household garbage over time, but Georgia’s EPD has vocalized that they have concerns about the impacts. Still, there is nothing stopping private facilities from combining the two wastes and local governments have had mixed results on banning coal ash at privately-owned facilities.

Back in 2015, it was projected that coal ash disposal would help the private solid waste market by:

For years, economists and environmentalists have said that coal ash will boost the solid waste industry and more recently, the Peach State provided another avenue to incentivize dumping from out of state, specifically with regard to coal ash.

The Georgia legislature amended the tipping fee structure as paid to the local governments which took effect July 1, 2019. Through 2025, it is now less expensive to dump coal ash ($1.00 tipping fee to local government) than it is to dump household garbage ($2.50/ton) thanks to Georgia Power. The Georgia Water Coalition holds that this will further incentivize out-of-state dumping of coal ash at Georgia landfills, especially privately owned facilities.

While it’s cheaper to dispose of than household garbage, there is plenty of coal ash to go around to still increase the bottom line of the solid waste company than if the company did not accept coal ash at all. The reduced fee is only good through 2025 as well.

Note: A few years ago, the EPA ruled that coal ash was classified as ‘non-hazardous waste’ which is why it can be combined with household garbage. The EPA has not denied the issues related to coal ash, but it simply does not meet the same standard of the definition of ‘hazardous waste’ like mercury, chemotherapy drugs, pesticides, batteries, and other items.

Landfill gases like methane can be captured as waste decomposes and then converted into electricity and sent to a local power grid. The more waste brought in, the more power that can be provided.

In 2016, Republic Services Inc. unveiled a renewable energy project in conjunction with Mas Energy LLC that serves the Metro Atlanta area, generating 24.1 megawatts of electricity. The energy is reportedly enough to power 15,665 households. Mas Energy also has a partnership with 38 EMCs in Georgia based on the waste at a Lowndes County facility. Both have been successful to date.

Depending on the set-up and the partnership with the local government and the surrounding community, varying levels of state and federal grants – often from the USDA and the EPA – are available for landfills. Landfills that accept coal ash and conduct energy conversion are eligible for even more grants, regardless of the relationship with the community, as well as tax credits and exemptions, production incentives, and special-rate loans.

Local governments often provide incentive packages as well in the interest of economic development, though they may be negligible compared to the state and federal opportunities.

The solid waste industry itself is booming. In November 2018, Global Market Insights projected that the MSW industry will grow to more than $25 billion by 2024 and the stock market related to solid waste is anticipated to yield $324 million in revenue by 2024. And just last week, it was estimated that the fly ash market – a type of coal ash –  would increase to $9.8 billion by 2025.

The opportunity is there. A private landfill need only be creative to be lucrative.

Graphic in part from hcnv.us