GA vs. BHS showcases the Terror siren and the Pirate cannon

The City Championship Game between Brunswick High and Glynn Academy offers the opportunity for the traditions of both schools to collide Friday night at Glynn County Stadium. 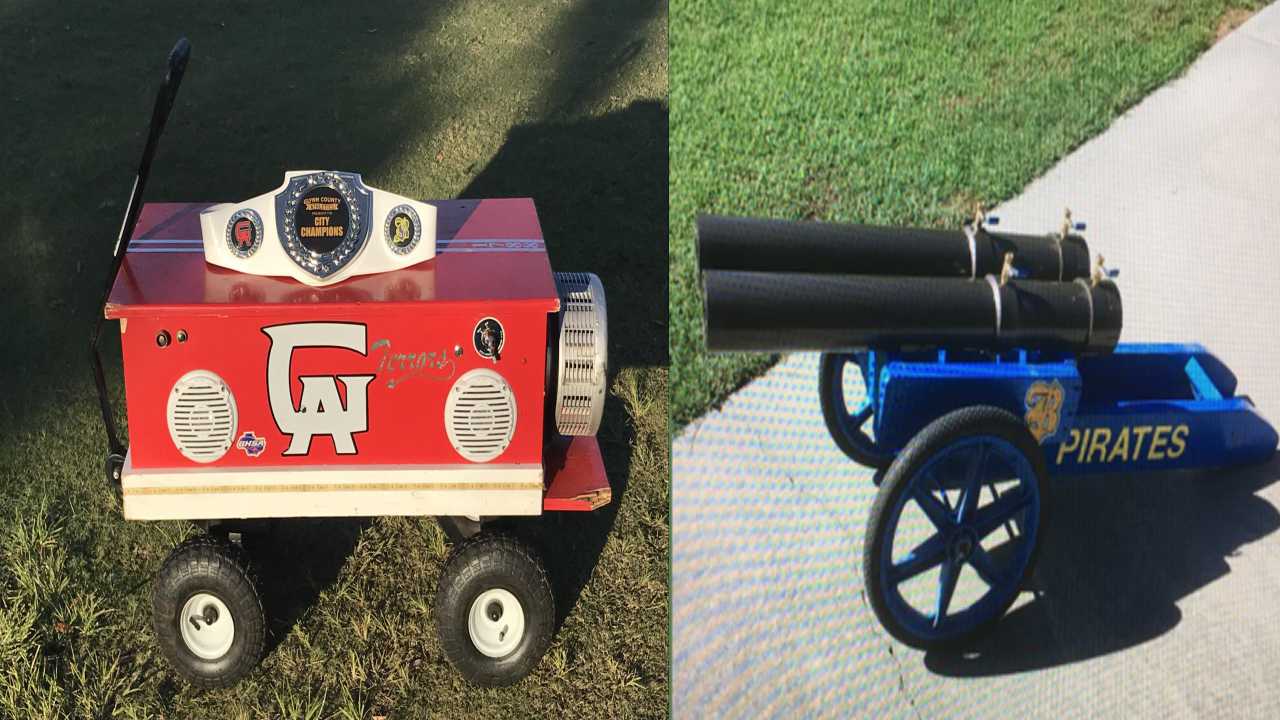 The City Championship Game between Brunswick High and Glynn Academy offers the opportunity for the traditions of both schools to collide Friday night at Glynn County Stadium.

And when the Pirates and Red Terrors take the field for their annual grudge match, two staples of both programs will be on full display for all to see and also hear from anywhere inside the stadium and maybe out on Fourth Street, too.

The sounds that both make are familiar to the fans of the two local teams, but also fans from opposing teams who face the Pirates and Terrors on a regular basis.

“When the other team’s fans hear that noise, they know something good has happened for us and something bad has happened for their team,” said Glynn Academy supporter Andy Jones who was responsible for making the siren a GA tradition on football Friday nights in the early 2000s.

The BHS cannon has been around a little bit longer. The Pirates first fired their cannon during the 1998 season as BHS was marching to the state quarterfinals that season. The next year, of course, Brunswick went all the way to the Class AAAA state title game with the cannon going to Valdosta for the game at Lowndes with the team.

The cannon was the idea of Brunswick booster club member Stu Graham who built it himself without anyone knowing about it until it made an appearance on the sidelines.

“Stu just thought with us being the Pirates and cannons being associated with Pirate ships, it would be a good thing,” said Randy Griffin, also a member of the BHS booster club at the time who took over as club president prior to the 1999 school year.

Graham lived near the local stadium at the time and would pull the cannon to the games using his own personal golf cart.

“Stu gets all the credit for the cannon. I just took over and kept the tradition going. Hopefully, someone else will do the same one day,” Griffin said.

Griffin has been firing the cannon for the Pirates since the 2002 season. That’s when then-first-year Brunswick coach Maurice Freeman called Griffin to inquire about the cannon’s whereabouts when he didn’t see it at the games after taking over the program and hearing about the Friday night tradition.

“He wanted it back,” Griffin said.

The original cannon that Graham built was used until the 2014 season when Griffin decided it might be time for a new one as a safety precaution.

So, he decided to build a double-barrel cannon that was capable of firing multiple shots in succession without having to quickly reload the barrel. This allows him to fire away when Brunswick scores a touchdown and then fire another shot when the Pirates make the extra point. He also shoots off the cannon when the team runs onto the field prior to a game.

The two barrels sit on a base that is made of wood. The double barrels are made from PVC pipe that make four-inch chambers at the rear that are reduced to an inch-and-half at the front end.

“That’s what makes the loud explosion when it goes off,” Griffin said.

The chambers are filled with about a half a cup of water and about a “thimble full of gunpowder” as Griffin describes it.

“You can hear it sizzling in the cannon,” he says.

The longer the powder sits in the water, the more the pressure inside the cannon builds up and thus the louder the explosion is when the cannon is fired, Griffin explains.

“The pressure in the chamber creates the noise. You need to give it at least 10 seconds before you fire it, but I have had it in there long enough before to pop my ears,” Griffin said.

When the cannon fires, though, you know the Pirates have put points on the board. It can be heard throughout the stadium.

“A lot of people working the concession stands, they can’t see the game, but they know we’ve scored when they hear the cannon go off,” Griffin said.

Griffin said he has built a cannon to similar specifications for Appling County which got word about Brunswick’s and inquired about having one built for the Baxley team which is also nicknamed the Pirates.

The Glynn siren was a long time in the making for Jones who sat on the idea for almost 20 years before acting on it. A former player for the Red Terrors, Jones always remembered going to Douglas to take on Coffee and hearing an annoying similar noise coming from the home side of the field when things were going good for the powerful Trojans of the early 1980s.

“They had this running back named Andre “Pulpwood” Smith and we had to listen to that thing all night long,” Jones said. “It burned into the recesses of my mind how aggravating and annoying that was. We never saw it, but we heard it all night long and that stuck with me.”

Jones, a longtime supporter of Glynn football who now assists the team in a number of ways during practices and games, decided to bring the siren to GA’s program in the early 2000s.

The first siren was an electronic siren that he used to use on his personal vehicle as a volunteer fireman with the county. He placed it on a retrofitted Radio Flyer Wagon and put it into use on Friday nights.

“It just wasn’t loud enough,” said Jones, whose father Doc has assisted him during the evolution of the siren.

Provided photo – Andy Jones came up with the Glynn Academy siren and made it a tradition.

Thus, Jones found a mechanical siren, like one that might be found on a fire truck or emergency vehicle, and mounted that to the old wagon that eventually wore out and has since been replaced with a custom-built wagon.

The third edition of the siren, which now is dressed up with LED lights, is actually a multi-purpose piece of equipment. It has a Bluetooth stereo speaker system that the Terrors sometimes use to play music in the locker room before a game. It also is equipped with USB chargers that the team can use to charge cell phones or video equipment that is used during games.

But make no mistake. The siren is mainly used to annoy the opponent with what the Terrors and their fans have come to find as a joyful noise. And the siren can now be turned on with a remote control by anyone within about 20 yards of wherever it is.

“We try to angle it where the noise is going to the other team’s side of the field,” Jones said.

The siren is kept inside Glynn’s fieldhouse and is loaded on the equipment trailer that goes with the Terrors out of town or to the local stadium.

“Wherever we go, the siren has been and will go,” said Jones, who noted they had it in the Georgia Dome in 2015 when the Terrors played for the state championship. “It’s the most hated piece of equipment we carry with us.”

The siren can be charged up overnight, but Jones hinted it might stay on charge a little longer just to be safe this week.

“We’ll make sure it’s juiced up well for Friday night,” he said.

Jones suggested he has some ideas for the future evolution of the siren, but he wouldn’t reveal what those ideas were.

“I don’t know what we’ll do,” he said. “Five years ago, I wouldn’t have thought we really needed a USB charger on the sideline. You never know.”

What we do know, though, is the BHS cannon and the GA siren in their current forms will be there Friday night for the annual rivalry game.