The county tax commissioner’s office found that, even in the year McBath was elected to represent Georgia in Congress, her motor vehicle registration and voter registraiton did not meet the parameters to call Georgia her primary residence. 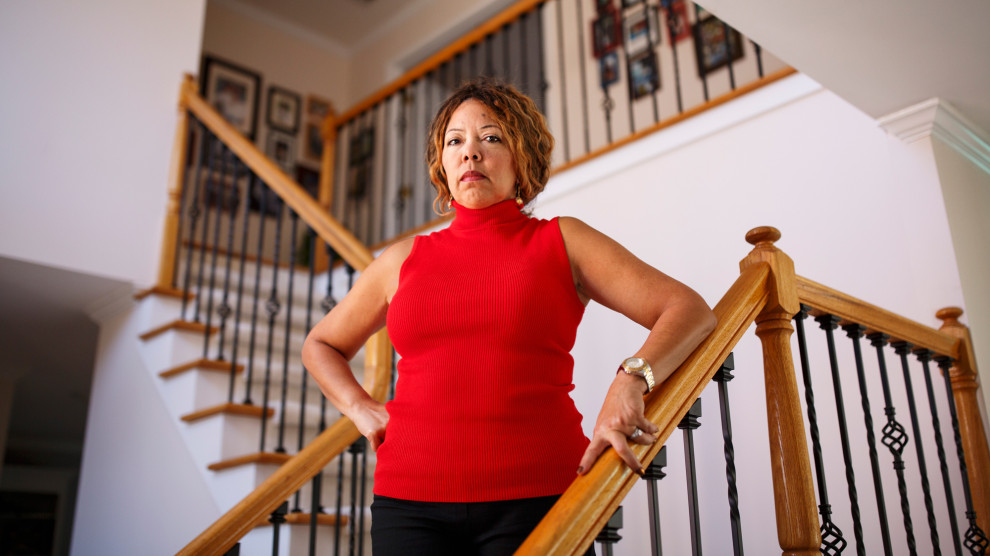 The November 2018 election in Georgia’s 6th Congressional District has been over for months, but one of the most controversial aspects of one newly-elected Congresswoman’s residency has only recently been settled.

AllOnGeorgia reported back in October 2018 that then-congressional candidate Lucy McBath and her husband, Curtis, were set to have their homestead exemption in Cobb County revoked by the county tax commissioner’s office because they did not meet the requirements for primary residency. The proposal for revocation was appealed by the McBath’s and the final decision was not made before Election Day on November 8th.

But the Cobb County Tax Commissioner’s Office confirmed Tuesday that the McBath’s homestead exemption in Cobb County was, in fact, revoked for the tax years 2016, 2017, and 2018 – the year McBath ran for Congress and won – and back taxes were assessed. The audit on the homestead exemption dated back to 2015, but Georgia law only permits a three-year lookback.

The final decision: the McBath’s did not meet the requirements to call Cobb County their primary residence for the three tax years leading up to the election. The reasons cited included:

McBath, who narrowly defeated Republican Karen Handel, publicly said she ‘recently moved back to the district’ after living in Tennessee, but her husband Curtis McBath had been claiming a homestead exemption in Cobb County for the last 16 years, even though many documents that would otherwise verify residency in Georgia are legally recorded in Tennessee.

Ultimately, the Tax Commissioner assessed over $1,197 in taxes due to the county for the three year lookback in which homestead exemptions were wrongfully claimed. The Commissioner’s office confirmed Tuesday that the taxes had since been paid.

All of the documents as provided by the Cobb County Tax Commissioner are provided below. 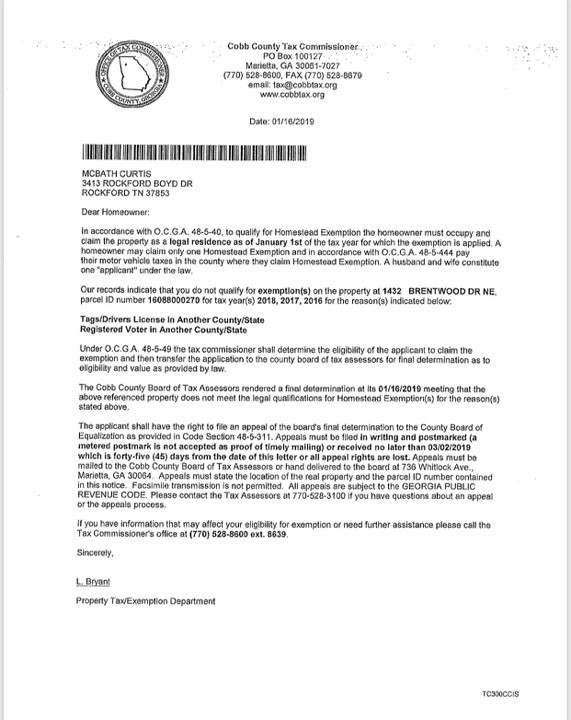 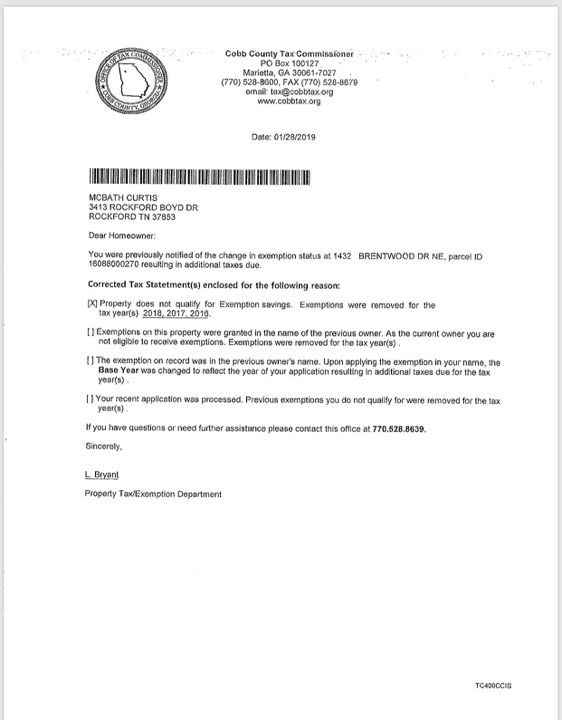 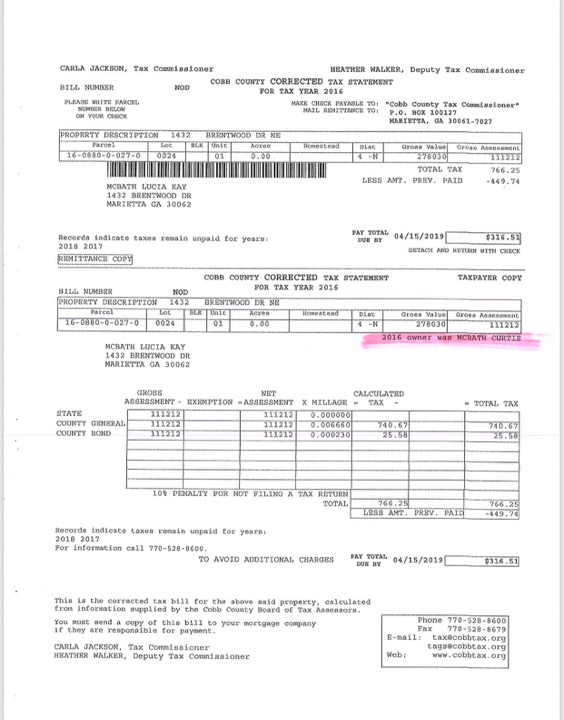 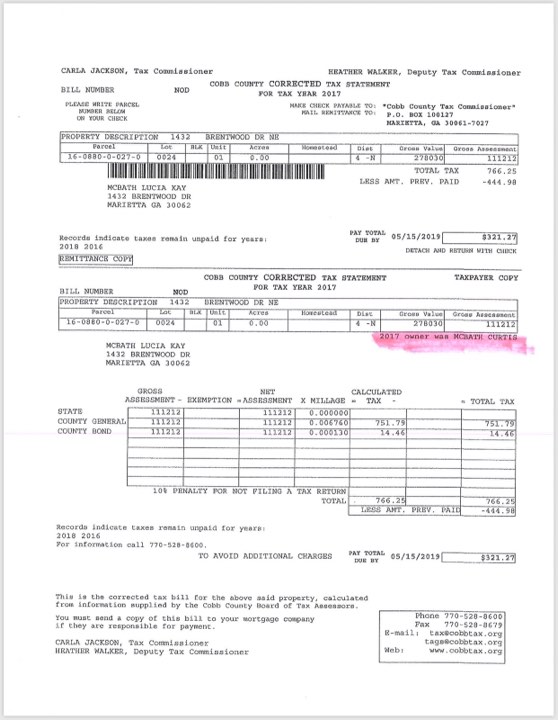 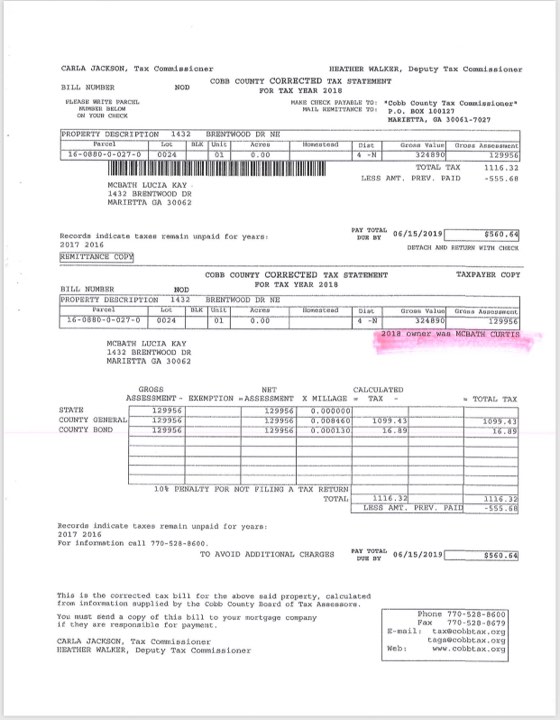 McBath was criticized during the election cycle over inconsistent comments about her residency in recent years, saying in an Atlanta Press Club debate in May 2018 that she has been a resident of Georgia since 1990, but records indicate she voted in Tennessee in 2016, and then reverted back to Georgia voting in 2017. The Tennessee Secretary of State’s office confirmed in July 2018 that McBath registered to vote in Tennessee again on March 23, 2016, but the McBath campaign claims Lucy voted for herself in May and July of 2018.

The Blount County Tax Office in Tennessee indicated that Curtis McBath owns three parcels of land in the county and Lucy McBath said on more than one occasion that her husband is a ‘permanent resident’ of Tennessee. The Atlanta Journal Constitution reported in 2018 that Curtis McBath has been registered to vote in Tennessee since 1991. And despite the televised claims of permanent residency, no attempts have been made to update the status of the homestead exemption in Cobb County, which has been claimed since 2002 – a whopping 16 years.

In October, AllOnGeorgia requested the correspondence between the Cobb County Tax Commissioner’s Office and the Lucy and Curtis McBath after allegations that the McBaths were double dipping on homestead exemptions.

The audit letter was sent to the McBaths at an address in Rockford, Tennessee (which is among the properties owned by McBath in Tennessee, per the Blount County property tax records) but details the property in question on Brentwood Drive in Marietta. At the time, the property tax records from Blount County, TN listed the Marietta address as the correspondence address for Curtis McBath. The Marietta address was the same one on which Curtis McBath has claimed a homestead exemption since 2002.

It is unclear as to whether or not the homestead requirements have been resolved for tax year 2019.