FAITH COLUMN: The Sure Word of God – Part II 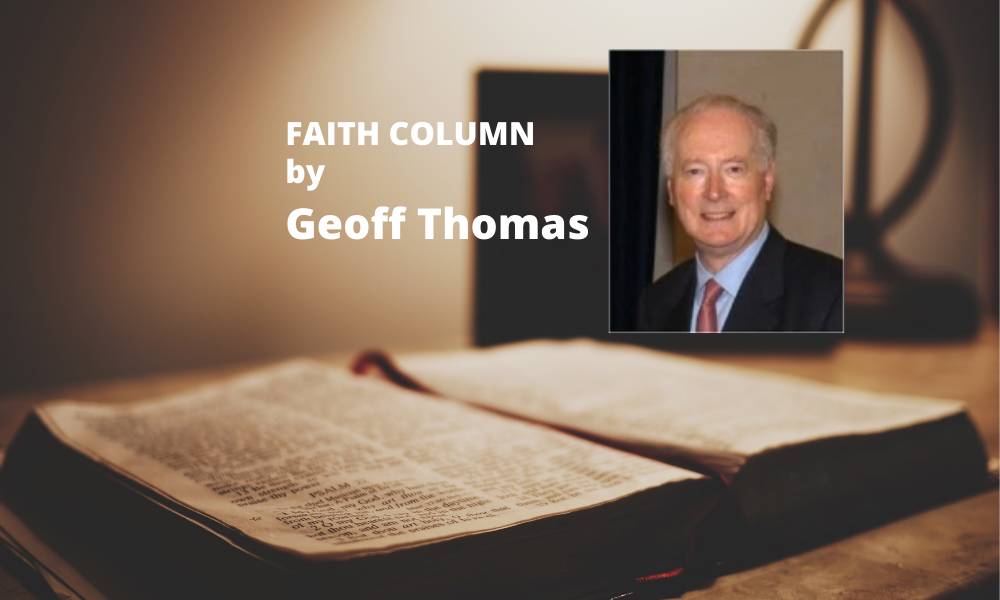 Continued from The Sure Word of God – Part I

Thirdly, the Lord Jesus Christ gave His Word to the apostles

Paul was very conscious that the Christian message was not an original message thought up by him. He was aware of the secondary nature of his understanding, that his was a derived message, he had ‘received’ it. ‘I delivered unto you first of all that which I also received,’ he said. When he is summarising the Gospel in 1 Corinthians 15:1ff. he says, ‘I declare unto you the Gospel which I preached unto you, which also ye have received, and wherein ye stand’ (verse 3). And again, ‘For I delivered unto you first of all that which I also received, how that Christ died for our sins according to the scriptures: and that he was buried and rose again the third day according to the scriptures.’ When he spoke to the Galatians (1:11–12) he said: ‘I certify brethren, that the Gospel which was preached of me is not after man, for I neither received it of man, neither was I taught it, but by the revelation of Jesus Christ.’ So Paul and the apostles are conscious that they are simply passing on something, an unoriginal message, that they are mere delivery boys, or heralds declaring a message that they have received from someone far greater than themselves, to whom they must answer for the stewardship of their message.

There is this great New Testament teaching about the Lordship of Christ, his incarnation and redemption. It speaks about the meaning of his sufferings, his resurrection from the grave. Paul says, ‘I am handing it down in my preaching and in my letters’. It did not originate in the apostle. He simply ‘received’ it. But he did not get it from man, not even from the apostles. He got it directly from Jesus himself. Like the prophets who were called into the presence of Jehovah and came from there with a word burning like fire in their bones, so Paul went to Jehovah Jesus and came from him with specific given good news for all men. He had spent those years in the wilderness of Arabia. Just as John the Baptist received his commission and preparation during years of sojourn in the wilderness coming out to awaken the nation, so Paul spent time in the presence of Christ, and the same Lord who had spoken to him on the road to Damascus proceeded to clarify to the apostle eternal truths. It was from the Lord Jesus that Paul got his doctrine of revelation. There is not a hair’s breadth of difference between the apostles’ attitude to the Word of God and their Lord’s evaluation of it. Paul’s words in 2 Timothy 3:16 are, ‘All scripture is given by inspiration of God and is profitable for doctrine, for reproof, for correction, for instruction in righteousness.’ The apostle Peter tells us ‘Prophecy came not in old time by the will of man: but holy men of God spoke as they were moved by the Holy Ghost’ (2 Peter 1:21). That attitude to the Hebrew Scriptures they learned from the example and teaching of their God and Saviour Jesus Christ.

So the authors of the New Testament letters had the very same approach to Scripture as their Lord himself. The apostles quote every part of the Old Testament. The only book from the Old Testament that is not quoted directly in the New Testament is the book of Esther. In the letter to the Hebrews where David or Isaiah are being appealed to, you will find the author to the Hebrews prefacing his quotation with the words, ‘God said’ or ‘the Holy Spirit says’ (note the present tense, as referring to a living reality). Paul in Acts 24:14 confessed that he believed in everything that was written in the law and the prophets. In other words, if it was found in the Bible, Paul believed it. This is how God had taught him to respond to Scripture. Then we also learn that for the apostle Peter the writings of his brother Paul are laid on exactly the same level as the ‘other’ Scriptures, that is, of the Old Testament itself (2 Peter 3:16).

So all Scripture is believed to be God-breathed, that is, the inspiration of God. This is the teaching of the Lord Jesus Christ and his apostles. If you then could have inquired asking the Saviour how comprehensive is this inspiration, He would answer you that, ‘not a jot or a tittle of the law shall pass away until all be fulfilled.’ What we mean by inspiration is that God came in the exercise of a very special providence and supervised the writing of the whole of the Scriptures. The Bible is the Word from God. It is not simply that God showed men something and let them write it down as they were pleased. He did not let them feel something numinous and inspirational, and then they composed it in their own words. The inspiration is related directly to the writing.

You might protest, ‘But to err is human. We can’t have human activity without sin or error.’ The issue is a different one. Is not Almighty God able so to superintend, control and overrule the operations of the human mind so as to ensure that men say exactly what God wants them to say, and to write precisely what God wants them to write? Is this an impossibility with God? He can make the universe and raise the dead but he cannot prepare a man in his providence so that the man inscribes what God wants? It is interesting in Revelation 10:4, where John is about to write down some words and God intervenes and says to him, ‘… write them not.’ So God assisted these men as they used their distinctive personalities, the exercise of their faculties, minds, memories and emotions. God freely enabled them to use their experiences and even a number of biographical references. In all their writings God determined that they freely put down and recorded what transpired to be exactly what he wanted them to say. The Lord worked all things after the counsel of his own will. He prevented them, as the foundation of the church for the next two thousand years, from laying a foundation of error. There was no destruction of their personalities. Paul remained different from John and also from Luke. It was not always dictation on God’s part, although there is an immediacy and an intimacy in their relationship to God, like a servant whose eyes are on the face of his master. The great comprehensive idea and the whole of this concept of divine inspiration through men is that every single Scripture is God-breathed. All the parts of the Bible say exactly what God intended them to say. The Scriptures are God’s infallible testimony to himself, and to us about himself to the end that we might be saved.

Fourthly, there are some difficulties

There is a difference between difficulties and errors. In all of science there are difficulties. Consider two or three aspects of biblical interpretation which might cause inerrantists some difficulty.

The Bible is insistent that the universe is God’s creation. It would have no existence without Him. In fact, we are told that God made everything in Christ: ‘By him were all things made;’ ‘Without him was not anything made that was made.’ In Genesis 1 we are introduced to God’s approach to creation. The plan was from the simple to the complex in six great acts—the first day, light; second day, the skies and sea; third day, the earth: fourth day, the sun and moon; fifth day, birds and fishes; sixth day, animals and man; seventh day, God rested. Some of these acts were out of (or in) nothing, and in others of those acts God created out of already existent material. Immediately God intervenes and creates something, then it is not natural; it is a miraculous intervention. The sum of factors that have been so far made are not sufficient to explain the changes. For example, God said, ‘Let there be light,’ and immediately there is light. Not a pinprick, but a universal curtain stretching out from one end of the universe to the other. We might argue that light travels so many millions of miles in a year and the time the light from a distant star reaches us indicates (with other factors) that the universe should be 300 million years old. That does not take into consideration the creative power of God. In fact the intrusion of God meant light was made in a moment. When God had made Adam and then Eve they would probably have looked as if they were in their early 20’s, but they received life in a moment. Adam was made out of the dust of the earth, and Eve out of a rib in Adam’s side. God breathed into Adam’s nostrils the breath of life and it was because of that inflatus that he became a living being. The making of our first parents is due to a totally supernatural action.

Consider the light cast on this from the mighty works of the Lord Jesus. In his first miracle Christ turns water into wine, and the man who tastes it judged that it was fine wine. We know, in fact, that it was only minutes old. In the world, rain falls upon the soil of a vineyard. It is absorbed though the roots of the vine and taken up to every part of the plant. Flowers are pollinated, fruit appears and ripens as the sun beats down. Finally, the grapes are picked, crushed, purified and aged at the climax of the actual wine-making process. The Lord short-circuited that in a moment’s creative supernaturalism. Again, Christ multiplies the loaves and fishes to a super-abundance. It is bread he makes, not grain, nor flour nor dough. When he multiplies the fish it is not fry he makes but mature fish, a year or two old, and cooked. Who are we dealing with? It is Jehovah Jesus, the God of Genesis 1. That chapter is doxological, of course. But we are turned to praise only because it is true. God created the universe. He made our first parents, and he placed them in a state of probation. They turned against him and sin entered the world and its inevitable companion death. When God made man there was no death. It was a perfect world and sin was death’s trigger. It was that historic fall that plunged Adam and all of us into sin and brought death to mankind. The Lord Jesus and his apostles throughout the New Testament teach this and so must the Christian faith in its mighty confessions for twenty centuries. Creation, fall and redemption are the structures on which the Christian religion is erected.

COLUMN: Trump’s COVID-19 Diagnosis Says More About You Than It Does About Him
COLUMN: Make Up Your Mind About Carolyn Bourdeaux
Posting....