COLUMN: Trump’s COVID-19 Diagnosis Says More About You Than It Does About Him

OPINION: Jessica Szilagyi opines on the fact that people are delighting in the recent COVID-19 diagnosis for President Trump.

I can’t comprehend delighting in the fact that the President has tested positive for COVID-19.

I see nothing delightful, ironic, funny, coincidental, rewarding, redeeming, or Karma-esque about it. It isn’t about campaign rallies or who visits the White House – we all know someone who did nothing but stay home and have groceries delivered and they still contracted COVID-19. It does no good to speculate how it was contracted or by whom.

Perhaps, more importantly, it doesn’t change that he is a human being. I have dreaded every time an elected official has tested positive for COVID since all of this began, simply because partisanship has decided whether or not people are deserving of well wishes, something that even my cynical self never thought we would see.

But Trump is undoubtedly one of the most polarizing of elected officials, so the worst tactics are amplified and magnified. Nevertheless, I find it reprehensible that an individual’s health diagnosis has, within less than 12 hours of being reported, been integrated into a game of political chess. Some pundits and activists have been really vocal about the conflict over which approach to take:

Option A: “Are his supporters worried about his health? Why? Republicans have largely shrugged off the virus, the data, etc. If it isn’t a big deal, they shouldn’t be worried.”

Option B: “I’m going to recirculate every statement made by Trump – seriously or sarcastically – over the last 7 months. Yes, it’s true I’ve spent the better part of the year claiming the virus needs more attention, that it’s destructive and deadly, and that no one deserves to get it…but catty and funny quips on the internet will definitely make me feel better because I hate Trump.”

Option C: “Let’s just sit back and hope for the worst.” 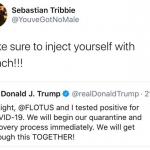 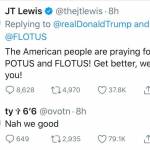 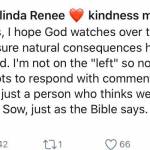 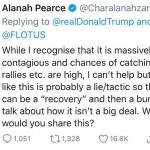 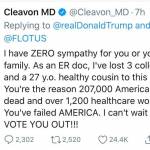 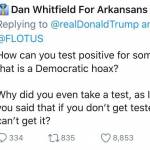 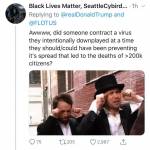 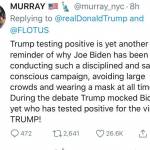 We could spend hours hashing out the intricacies of how this pandemic has been handled, how it should have been handled, money>life, money<life, THE ECONOMY!, the data, the experts, critical infrastructure, THE SCIENCE!, mask mandates, and so much more, but that would not be a good use of our time because the problem here is very simple to describe: humanity is circling the drain.

How a virus has transformed into a political issue is beyond me, but the reality is that it is polarizingly political and the reality is front and center. It is unpopular for people to hold different beliefs and there are plenty of people in America who think political views transcend every other component of an individual. They believe

I’m not saying that people having personal lives means they should be free of criticism and opposition. In fact, just the opposite is true. But what’s also true is that a person can be a political figure and a human being at the same time and only the worst of those among us are on this earth to wish ill on other human beings. Trump did not contract COVID-19 because he’s an elected official or because he is a Republican or because you wished he would so you could make a point. He has COVID because he’s a human being and COVID is a virus transmitted by other humans.

If that sounds robotic, then I accurately articulated the point.

I didn’t vote for Donald Trump in 2016. During his tenure, I have found myself shaking my fist at his actions as often as I have muttered ‘Nice!’ under my breath. The same was true for Obama. In fact, I can’t think of an elected official – and I’ve dealt with my fair share of them – who at some point or another has not caused me to think, ‘What the hell are you doing?!’ But I have never wished for them to die. I’ve never hoped they will suffer or struggle personally. I’ve prayed for defeat at the ballot box and at times I’ve worked to accomplish that, but none of it is personal. Political hurdles are one thing. Personal hurdles are entirely different. In fact, they used to be off limits.

But we continue to sink lower in our tactics and rhetoric and nothing is off limits anymore. At least not on a large scale. On a small scale, there is a simple test you can take to determine whether or not you are part of the problem:

Do your political views run so deep in your blood that you find yourself feeling anything other than concern for a specific sick person because that person thinks differently than you?

Would you feel comfortable with your response about a positive coronavirus test if the name was interchanged with someone from your own party?

If you answered yes to either or both of these questions, you may want to reevaluate your political views. And your moral ones.