Autumn is upon us and with the beginning cooler temperatures comes a crispness in the air that football fans across Northwest Georgia know all to well. 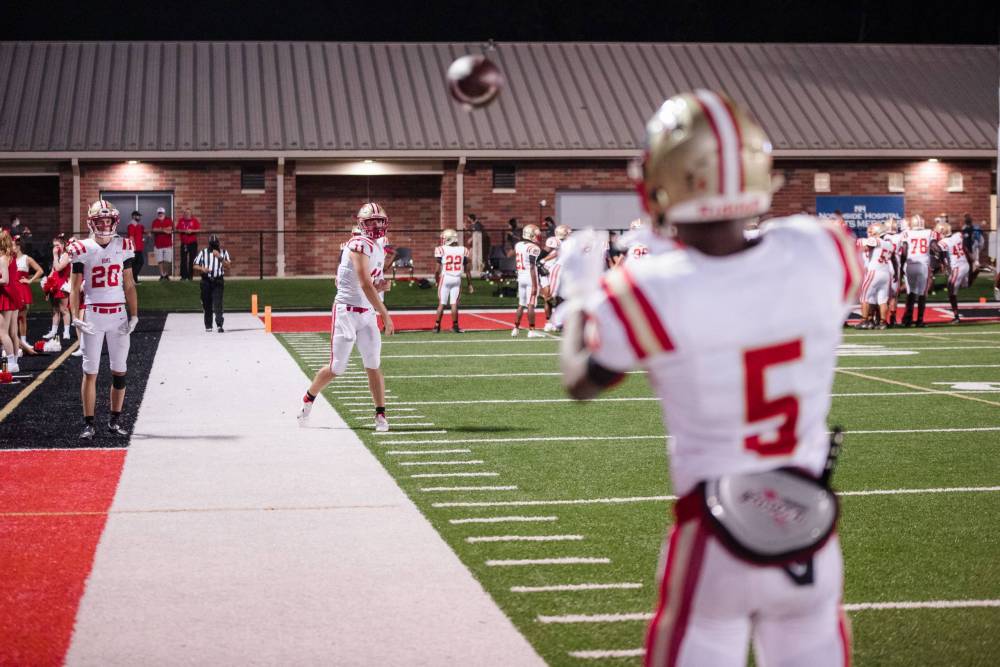 Autumn is upon us and with the beginning cooler temperatures comes a crispness in the air that football fans across Northwest Georgia know all to well.

This past Friday night, the Rome Wolves hit the road and traveled to Canton, Ga. to take on Cherokee High School’s Warriors. After coming off a bye week, the Wolves were hungry for competition. This matchup with the region 5, class 7A Warriors would prove to be a challenge and a lesson in execution on the field.

Cherokee received the ball on the opening kickoff, and it was not long into the contest before their passing game put them on the scoreboard first. The smothering Wolves’ defense their opponents have become accustomed to led Cherokee to nearly abandon the run early and put the ball in the air. Taking an early lead of 7-0 after a pass caught in the endzone, the Warriors took the field to play defense and it was Rome’s chance to answer.

And answer they did. Rome came away with a score after a tough drive, led by senior running back Eddie “EJ” Burks, that eventually set up a Caleb Ellard QB draw for six. A missed field goal attempt put the score at 6-7, Cherokee, with 3:20 left in the first quarter.

Cherokee then answered with another score after securing great field position on the kick return. The Warrior’s QB connected with his wideout for a 26-yard score making the score 14-6.

The Wolves’ offense was challenged by a fast Cherokee secondary all night. During their next possession, Rome continued to move the ball with the run game and the help of backs Burks and Caden Williams—a freshman who was explosive with the ball all night—but the drive stalled on the Cherokee six. Rome kicked the field goal making the score 14-9, Cherokee.

Cherokee was able to break a big run in the second quarter that put them in scoring position with 3:59 left in the half. A personal foul on the Wolves gave the Warriors a fresh set of downs inside the 10-yard line which opened the door for a three-yard scamper for a score.

Rome was able to move the ball into scoring position sparked by a 35-yard pass from Ellard to senior wideout Jaquavious Wise with seconds left on the clock before halftime. But an interception by the Cherokee secondary ended with a touchback and set the score at 21-9, Cherokee, before heading to the locker room for halftime.

That would be the last time the Cherokee offense crossed a goal line for the rest of the contest.

After the half, Rome continued to have problems scoring in a defensive stalemate with the Warriors until the fourth quarter where two field goals by senior placekicker Fernando Lopez-Romero gave Rome a chance to come back for the win. Fernando put three points on the board from 41 yards out at the 11:04 mark and split the uprights again with only 52 seconds left in the game. Before an onside kick attempt, Rome was in position to win if they recovered the ball.

“We gave up a few scores early on to their quarterback, but that is our fault because we let the receiver behind us,” Reid said when recalling the early quarters of the game. “We just did not execute on the offensive side of the ball and made some key mistakes on defense. I thought we had really great play from our freshman quarterback (Reese Fountain), from EJ (Burks), our freshman running back (Caden Williams) ran the ball great, and we had some really strong drives with Caleb (Ellard) under center. That is who we are. We are not doing any one any favors; we are playing the kids who we believe can get the job done.”

Reid said that his team won the battle of total yardage, but the Wolves must finish drives if they hope to be successful this season. Still, the Wolves’ head coach is hopeful because he sees some of the same mistakes on Saturdays and Sundays from teams at the next level. He is just going to work harder in practice, and he expects his guys to do the same.

“My biggest thing with this young team is overcoming adversity and this game does not effect our playoff hopes unless we let it,” Reid said. “This game has no bearing unless we start listening to the nay-sayers. We have never had that problem in this program, and I do not anticipate that there will be a lot of noise to distract us. But that is the lesson we can learn right here tonight. Even if we had scored a couple of times in the second half, we still take home the problems we must correct and the need to get better. I think our crowd is going to see some odd football because there are some things we have not installed yet. We just haven’t had a chance to. But we entered this season with an attitude of not giving excuses, and we will not start making them tonight.”

After 37 years of wins and losses, raising a trophy and falling just short of his goals, Coach Reid said it all comes with the territory.

“This is just one more challenge, and we knew this was coming with our depth issues. But no one is going to feel sorry for the Rome Wolves,” Reid said as he headed towards the locker room to join his players and staff. “Cherokee had a great win on their home field, and many of our kids have only played one game against a funky offense (Rockmart Yellow Jackets). So, I’ll tell you what I feel the truth is, but I will not make excuses for our kids.”

Rome is on the road again this week as they prepare to take on the Collins Hill Eagles in another non-region matchup.