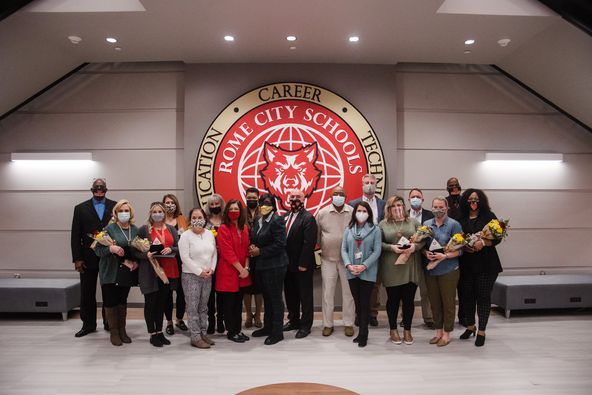 During the Rome City Schools Board meeting on January 12, 2021, system administrators recognized Teacher of the Year for each school in the system, and Support Persons of the Year for the system, including the winner from Central Office staff. The RCS School Board also announced the new chairperson and vice chairperson of the Board for the 2021 school year.

Listed below are the winners, their schools, and their starting year of service:

Griffin, Alexander, and Iris wrote, directed and edited a film for the Rome International Film Festival (RIFF) that won first place in the 3rd through 5th grade category.

They are part of the Virtual Learning Academy Gifted Classes taught by RCS educator, Kim Wright. The students from her classes were asked to participate in the RIFF student film competition to increase their communication, teamwork, technology, problem solving skills and much more.

Their movie was called “Dragon Hunt.” They also tied with another group for second place with a second movie they worked on titled “The Elusive Housecat.”
Judge’s comments about “The Dragon Hunt” film included: “Engaging! Great use of models to create fantasy world. The use of force perspective to give the appearance of a Giant Griffin and Dragon was clever. Good acting, too. Great job! Filmmaker put a lot of effort into concept and execution. Great job with costumes. So Creative!”
Elizabeth “Lizzy” Douglas, a sixth-grade student from West End Elementary, was also recognized for her work on the film, “Expectations vs Reality 2020.”
Lizzy wrote, directed, and edited a film for RIFF that won first place in the 6-8 grade category. The film was about what students and teachers typically do – or would expect to do – for school and while hanging out with friends, verses what they are realistically able to do in the year 2020.
Coupled with humor, the film poked a bit of fun at her online gifted teacher, Kim Wright. Some of the comments from the judges were: “Good variety of shots. Fun concept. Very funny and creative. Good use of different locations and situations. Very creative and the titles for each scene are cool.”

Please see the RCS Facebook page for a look at the films:

Head Coach of the women’s basketball and softball teams and Athletic Director for RHS, Jason Harris, received an award for being named Athletic Director of the Year for Region 5, 6A. Harris was not able to be present for the award. His wife, Meika was present to accept the honor on his behalf.

In addition to securing his 200th career win, Reid also led the Wolves to Back-to-Back State Championships at RHS in 2016 and 2017.
He was named Coach of the Year by the Atlanta Journal Constitution (2016, 2017) and Rome News Tribune (2015, 2016).
In 2016, Reid’s Wolves were honored by Fox 5 News by being named Team of the Year. He was also named Coach of the Year by the Touchdown Club of Atlanta in 2016 and 2017.
Since taking his position at Rome City Schools, additional honors for Coach Reid include:
2016 Georgia Athletic Coaches Association Coach of the Year
2017 Georgia Athletic Coaches Coach of the Year
2018 Coach of the Year in the National Federation of High School Sports
His most recent award was from Maxpreps.com, a national organization tasked with following sports all over the United States of America. He was named their 2019 Coach of the Year, making Reid among the top 50 football coaches in the country.
The RCS School Board was also honored for being named by the Georgia School Boards Association as a Distinguished School Board.
“We are so proud of the work our teachers, support staff and coaches do to educate our students,” said Byars. “and we wanted to recognize their achievements. We are also grateful for the support of our Board members. Our students are offered wonderful opportunities to be successful because of our system’s dedication to our mission.”

Cash Allen to be featured on WRCB Channel 3

Friday, January 15 will be Flexible Learning Day for Rome City Schools
GNTC Foundation raises approximately $250,000 in support of students during 2020