Rome Middle School student Keviyon Lamons, Bridget Daniels (mother), Deariel Thompson (sister) and RCS school administrators were invited to attend the monthly City Commission meeting where he was presented with the Citizenship Award after stopping one of his classmates from being the victim of a bullying incident. 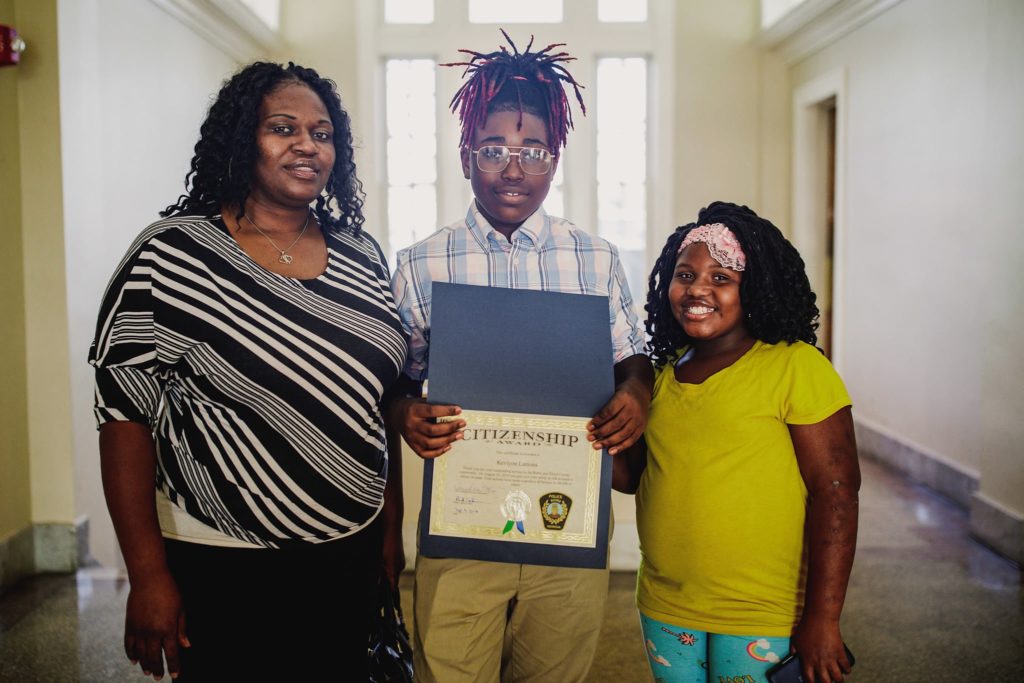 Before covering the city’s business, the Rome City Commissioners welcomed a local hero and recognized his bravery with one of Rome’s highest honors.

Rome Middle School student Keviyon Lamons, Bridget Daniels (mother), Deariel Thompson (sister) and RCS school administrators were invited to attend the monthly City Commission meeting where he was presented with the Citizenship Award after stopping one of his classmates from being the victim of a bullying incident.

“This shows a lot about Rome; it shows that we are a caring community,” said Commissioner Milton Slack as he called Lamons up to the front of the room to be presented with a certificate. “This young man took care of one of his fellow classmates and we want to thank him for that. So, the City of Rome wants to present you with the Citizenship Award which is one of the highest honors we can give to a private citizen.” 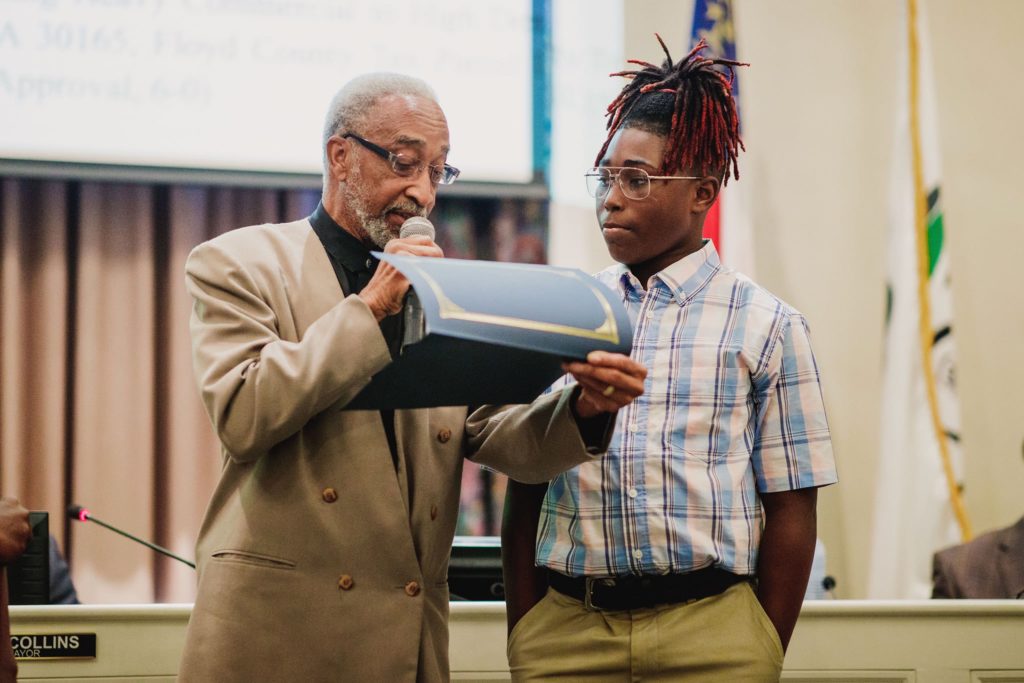 This honor is given to members of the community who go above and beyond to assist others when they are in need. On Aug. 27, 2019, Lamons put himself between a classmate who was being bullied and assaulted, and the bully. He stopped what could have been dangerous for the victim.

Rome Police Officer, Pfc. Sterling Haney, said that he was one of the first people to view the video footage from that day, and he was impressed with the poise of both the victim and Lamons during the altercation.

“To watch what happened to the young man who was assaulted on the bus was horrifying to see,” said Officer Haney. “The victim did not provoke the attack; he did not try to fight back. To see one of his fellow classmates stand up for him in his time of need on a school bus full of other kids was amazing. I told Chief (Denise Downer) McKinney that we had to honor this kid, somehow, in some way. I told her that this is the kind of kid we want in Rome Middle School.”

After Commissioner Slack presented Lamons and his family with a certificate, he allowed the young hero to address the crowd.

“When I was on the bus, I looked up and one of my friends was being hit by another student. He was being hit in the face aggressively. I decided to go and help him because no one else was helping him. People need to stand up for other people and stand up for what is right,” Lamons said.

Lamons also said that he gives credit to his mother for encouraging him to do the right thing, and providing the moral compass that guides him while he is away from home. “She told me to never let a person get picked on. She told me never to watch a person get bullied and not do anything about it,” he said.

Mayor Bill Collins gave his thoughts about this rare showing of courage and commitment to doing the right thing. “We are very proud of this young man and we are very proud of his actions,” Mayor Collins said. “We appreciate the support of our RCS parents who came along with the school system today.

“This sets a great example and we are so happy to see both of you here,” continued Mayor Collins as he addressed both Lamons and his friend that was bullied who came out to say thank you once again.

Chief McKinney offered comments about the bravery of the victim and the will power it took for him to be attacked and not fight back. She spoke highly of the character of both students and their families.

“I’ll say that our motto is to be RMS,” said Parke Wilkinson, Principal at Rome Middle School. “That means to be respectful, motivated and safe. We have great kids at Rome Middle School. I was thinking about a quote that says, ‘Strong people stand up for themselves, but stronger people stand up for others.’ Keviyon displayed that he stands up for others, and we are so very proud to have him in our school. Thanks to all of you for supporting Rome City Schools.”

“I want to say thank you to our Rome City Commission, Chief McKinney and our Rome City Police Department for recognizing these two students,” said Superintendent Louis Byars. “Like all of you have said, I am so proud that these two students acted in the way they did. We have outstanding students in Rome City Schools, and it is nice to see them being rewarded for standing up and doing the right thing.

Finally, Mayor Collins asked Faith Collins who chairs the Rome City Schools Board of Education to offer a few words. Tonight, though, she spoke from her heart and from the perspective of a mother who thought of what it must be like to have a son who acted so selflessly and a son who resisted aggression in the face of an attack. She was only able to offer a few words because her emotions were too strong for her to speak.

“I just want to thank them both,” Mrs. Collins said as her chin quivered and she used a single finger to lift her glasses and wipe a tear from the corner of her eye. “We need more students like them.”

“I have always taught him to be respectful,” said Bridget Daniels, the mother of Lamons. “I also teach my kids to have sympathy and a heart for others. That could have been a situation that happened the other way around and I would hope that someone would stand up for my son. I just want them to show compassion for others.”