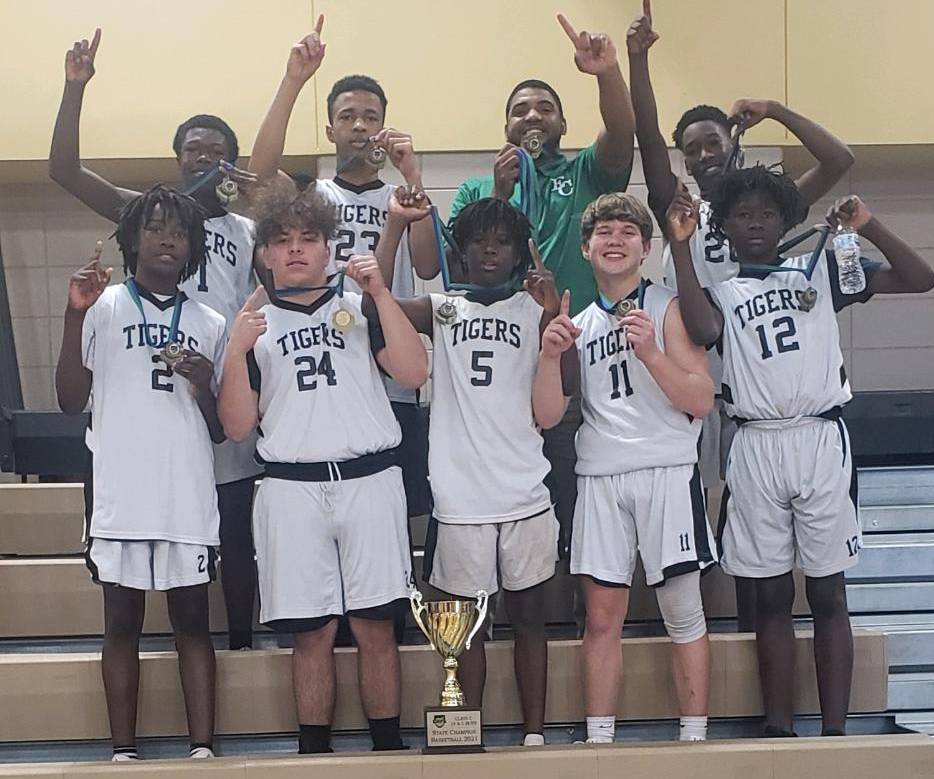 The Evans County Recreation Department’s Basketball Program has had phenomenal success
over the years and this weekend added another title to their resume. A group of 14 year old
boys captured the GRPA Class C State Championship in undefeated fashion.
On Friday night, Evans County faced off against the District 2 Champion from Appling County.
Despite a dreadful night from the foul line (11 for 25) the locals managed to defeat Appling
County by a score of 59-50. Evans County drained eight 3-point shots in the contest.
QuinTravius “Bubba” Hines led the way with 17 points. Michael Smith Jr added 25 points and
Christian Mixon chipped in 11 points to send to Evans County into the Semi-Finals on Saturday
morning.
Evans County faced Temple in the Semi-Finals. Evans County left no doubt about this game
from the start. At the half, Evans County led 48-10. Smith led the way with 20 points. Hines
added 17 points and his twin brother QuinTavius “Tay” Hines poured in 16 points. Charles Ryce
and Junior Waller contributed 8 points apiece.
In the State Championship Game, Evans County had to face a tough Macon County squad who
had scored an astonighing 98 points in Friday night’s opener. After trailing by a score of 25-18
at half, hometown guys outscored Macon County 40-24 in the 2nd half to capture the State
Championship. The final score was 58-49. Smith again led the way with 17 points. Tay HInes
added 16 points that included 9 huge 4th quarter points. Bubba Hines tossed in 11 points.
Evans County was led by Monterius Valentine. Valentine is also this year’s recipient of the
Chris Hodges Volunteer Coach of the Year given by the Evans County Recreation Department.
“We are so proud of these young men and their Coach. These young men have come so close
to a State Title for years and to finally reach that mountain top is a true indicator of their
determination. Most of these young men will be moving to the JV program next year and won’t
be eligible to play for us anymore. What a way to go out!”

Pinewood and Claxton Battle on the Diamond
Morris Shuts Down #3 Metter
Posting....