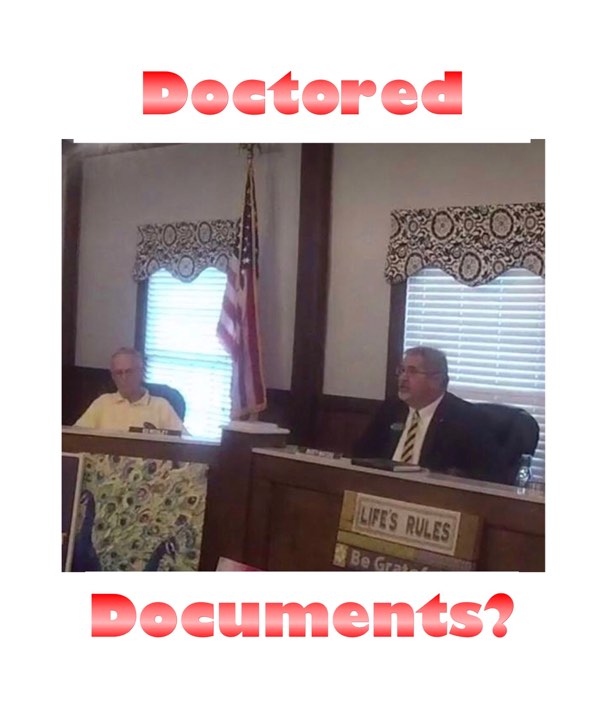 Records provided to AllOnGeorgia by the Evans County Board of Education on Tuesday appear to be forged and differ slightly from those provided initially by a source with the school system.

AllOnGeorgia filed an Open Records Request with the Evans County School System after receiving complaints by the public over a recent employment decision. Those complaints were accompanied by a host of documents, including records from the Georgia Professional Standards Commission (PSC) and an executive session meeting held on June 24, 2019 by school board members, BOE attorney Ron Hallman, and Superintendent Martin Waters. The records from the June 24, 2019 executive session were provided to AllOnGeorgia on July 15.

It is standard after receiving a tip with information to obtain public records to verify statements and documents provided by sources.

In the request, AllOnGeorgia sought documentation detailing any internal personnel transfers discussed in May 2019, June 2019, and to-date July 2019, with dates of approval and the party responsible for approval. The school system provided five documents but did not respond to the address the request for the party responsible for approving these transfers.

For May 2019, a blank spreadsheet titled ‘Personnel Internal Transfers – May 28, 2019’ reflects no transfers at all. In what appears to be an effort to reflect ‘no transfer of personnel’ in the month of May, the blank template document was either provided to the Board members in executive session for no reason or the sheet was created for the purpose of fulfilling the request. The document does not match the official meeting minutes from the same date or include the transfers that were voted on publicly in open session at the May 13, 2019 meeting, as the request does not mention a May 13, 2019 meeting.

No explanation was provided for the incomplete and inconsistent documents.

Three other spreadsheets for June 6, June 10, and July 8, all titled ‘Personnel Internal Transfers,’ reflect changes in employment position for a combined 8 employees, indicating that changing the employment status personnel without board approval is standard practice. These transfers reportedly occurred without a public vote despite other meeting minutes frequently reflecting public votes for transfers. (See May 13 meeting minutes). There is no explanation for the inconsistency on transfers of employees.

Most noteworthy is the document from the June 24, 2019 meeting – the date in question in AllOnGeorgia’s article published on July 22 – which highlights the employment of the wife of Superintendent Martin Waters. The copy provided by the school system does not match up with the original copy or other public records from the system.

Documents appear to be created for the purpose of establishing a regular frequency of discussing some transfers in executive session without a board vote or public posting, but the records of already published documents do not match the claims in documents provided on July 23.

Below is the June 24th meeting document as provided by the Evans County School System on July 23:

The documents provided to AllOnGeorgia in the Open Records Requests do not appear to be original.

The Georgia Open Records Act does not require government entities to ‘produce or create’ any documents not in existence at the time a request is filed, which encourages examination of records based on original documents in possession of the government agency, not manufactured ones for the purposes of providing public record.