Since 2010, school boards have been required by state law and Georgia DOE guidelines to have a nepotism policy in place. The Evans County school system has never had one and did not adopt one until 2 weeks after the questionable hiring incident. 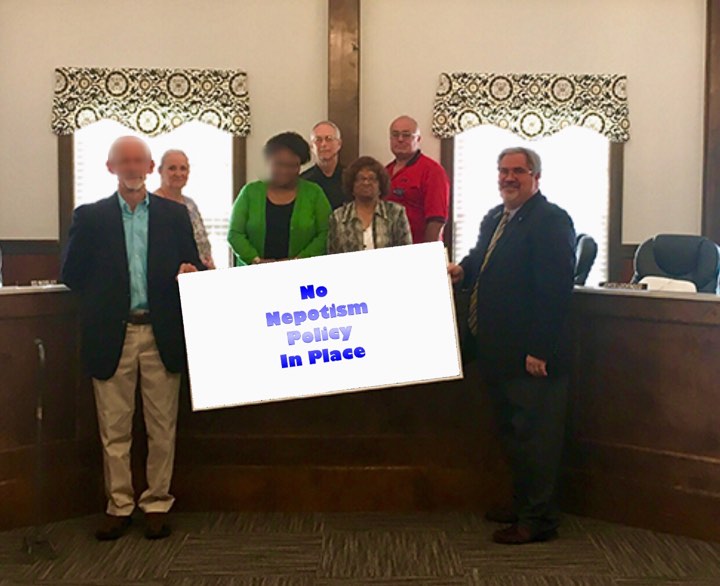 The Evans County Board of Education did not have a nepotism policy in place when the Superintendent approved the hiring of his wife without a public vote by the board.

Board members adopted a state-mandated nepotism policy two weeks after Superintendent Martin Waters notified Board members that his wife would be taking on a position at the elementary school, but guidelines from the state show the school system was required to adopt a policy eight years ago. School system records show that a policy was not adopted – initially or during any other previous update period – and the system has been out of compliance with the Georgia Department of Education’s (DOE) model ethics rules.

Under OCGA 160-5-1-.36, the Georgia DOE enacted a model policy for ethics for local school boards to adopt. School boards were required, by early 2011, to adopt the minimum standards as prescribed by the state and were encouraged to adopt additional policies to serve the school district needs and the public. Among the items on the minimum standards list is a nepotism policy.

The local policies, which used to appear on the county website, are currently under review as the board votes to approve new policies in waves. After information confirmed that the wife of Superintendent Martin Waters had been hired for a full-time position at the elementary school without a public board vote, AllOnGeorgia asked for copies of the county policies for school board governance.

AllOnGeorgia filed an Open Records Request on July 22, 2019 requesting both the nepotism and background check policies as adopted by the Board. The request asked for the two most recent versions of the policies in the event that the policy had recently been amended.

In response to the request, school system officials issued the following statement Tuesday:

We are currently in a policy review cycle with the Georgia School Board Association (GSBA). Policies are not available on the website during the review cycle. Please find attached BHB Nepotism policy adopted on July 8, 2019. This is a new policy; therefore, there is no previous version available.

A copy of the policy is at the bottom of the article.

A nepotism policy was not in place when Jessica Waters was hired on June 24, 2019.

Additionally, Board of Education members chose to adopt the minimum standards for nepotism as opposed to a more comprehensive policy. The nepotism policy adopted in Evans County applies to conflicts with elected school board members,  prohibits family members of the superintendent from running for school board, and prohibits the hiring of immediate family members of the superintendent only in cases where the family member is hired as a principal, assistant principal, or system administrative staff.

As for the compliance, under Georgia law, the local board is supposed to annually adopt and undergo a periodic training program on the adopted code of ethics. The same code section and O.C.G.A. § 20-2-51(e) both state that local school board members are not supposed to be eligible for election without reading, understanding, and agreeing to the code of ethics.

In Evans County’s case, the policies school board members agreed to adhere to have been incomplete. It is not clear if any other state-mandated ethics policies are missing from the Evans County policies.

The state has held a consistent position on tight nepotism policies. When the school board nepotism statute was unsuccessfully challenged in court, assistant state attorney Ann Brumbaugh told the Associated Press, “There’s a legitimate state interest in combating nepotism.”

The state also takes a hardline against nepotism in agencies, specifically the Georgia Department of Education, whose policy prohibits employees from “advocating for the cause or advancement, appointment, employment, promotion, or transfer of a family member to an office or position with an agency or with the Office of the Governor.”

In South Carolina, a superintendent was charged with ethics violations after the state ethics commission found he used his position to “obtain an economic interest for a family member.” (his wife).  The issue arose after the superintendent there participated in a governmental decision in which an immediate family member, his wife, had an economic interest, by presenting her to the Board of Education as a candidate for hiring during the Executive Session of a Board meeting.

Records from Evans BOE Appear to be Recreated to Fulfill Open Records Request
Superintendent’s Wife Will Not Work for Evans Co. in 2019-20 School Year
Posting....