“I can remember the first day I walked into school at Trion as a teacher. If I was young, I’d do it again because I enjoy it,” Coach B said. 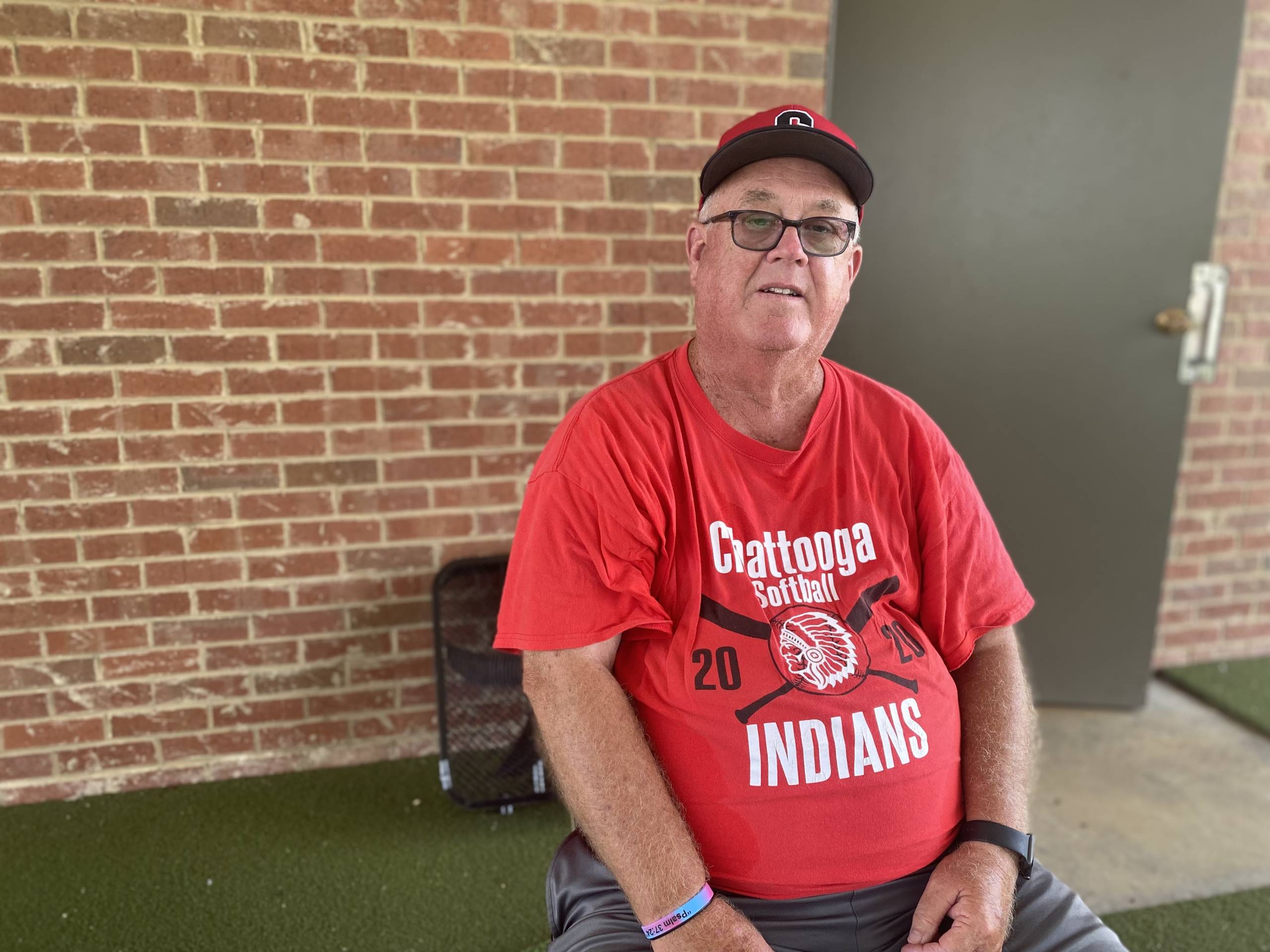 One of the winningest coaches in Chattooga County or Trion City Schools history (if not the winningest coach in County history) will be hanging up his whistle at the conclusion of this softball season. In baseball Coach Jeff Bennett has 314 wins, in softball he’s one win away from having 400 wins, a ‘W’ he plans to pick-up any day now, specifically August 5 at home against Armuchee.

Over 700 wins as a head coach on the diamonds

27 years as a football coach

33 years as a baseball coach

23 years as a softball coach

45 years in the classroom

….and the numbers are only part of the story.

“I can remember the first day I walked into school at Trion as a teacher. If I was young, I’d do it again because I enjoy it,” Coach B said.

He graduated high school as a three-sport Trion Bulldog, he will retire as a tried-and-true Chattooga Indian. After graduating high school in 1973, he went on to pitch at West Georgia College (1973-77) after Rick Camp helped get him a scholarship.

It is fitting his last season as a coach will be spent coaching his granddaughter, a pitcher, in her senior season, before she follows in her Granddad’s footsteps to the University of West Georgia.

Emma Howard has been going to the field with her Pop since she was just three years old, “I’d put her in the outfield, around 5 or 6 she started catching flyballs, groundballs. “The last game that we play may be a little bit emotional,” Coach B says fighting back tears.

“It’s very special to coach her. She’s one of the best I’ve coached, she loves it, and she works hard.” While his daughter Beth was playing softball in high school Coach B was coaching football and missed all but two games in her four years.

Being Pop and Coach has been an overdue gift, and one Pop and Emma have made the most of.

“This season being my senior season, and for Pop being his last season, it’s super bittersweet. Knowing that this is our last season together I’ve honestly teared up multiple times thinking about it. I’ve been on the field with him since I was three years old.  I’ve been on the field at every practice or in the dugout most games. It didn’t matter what sport he was coaching if it was on softball then I was on the softball field, and if it was baseball season then I was on the baseball field. I’ve spent the last 14 years of my life on the field with him I don’t want it to end but I know that I’ll make him proud by playing at his alma mater. After this season I will forever miss being on the field with him and his what I call “Famous” sayings he says while I pitch: “Bow your back 1”! Our last game on the field together will be the hardest,” Emma said.

Obviously having Pop as a Grandad and as a Coach has been fun but challenging. “I always get asked if he takes it easy on me since I’m his granddaughter and I always say absolutely not he’s harder on me than anyone else because he expects the best out of me and he pushes me to be the best I can be on and off the field.”

When Emma learned her Pop had been a pitcher at West Georgia, her destiny was set. She knew immediately West Georgia was where she wanted to go and never changed course. She attended every prospect camp the softball program offered until Coach Thomas offered her a scholarship. “I immediately called my Pop and said, ‘hey Pop I’m going to West Georgia to play ball just like you!’ He was over the moon happy and couldn’t quit talking about how proud he was of me for going to his alma mater! Once my high school career ends, I plan on attending UWG and major in sports management or education eventually end up being a high school softball coach to continue his coaching legacy! It feels very special to be able follow his footsteps at UWG and eventually in coaching,” Emma said. 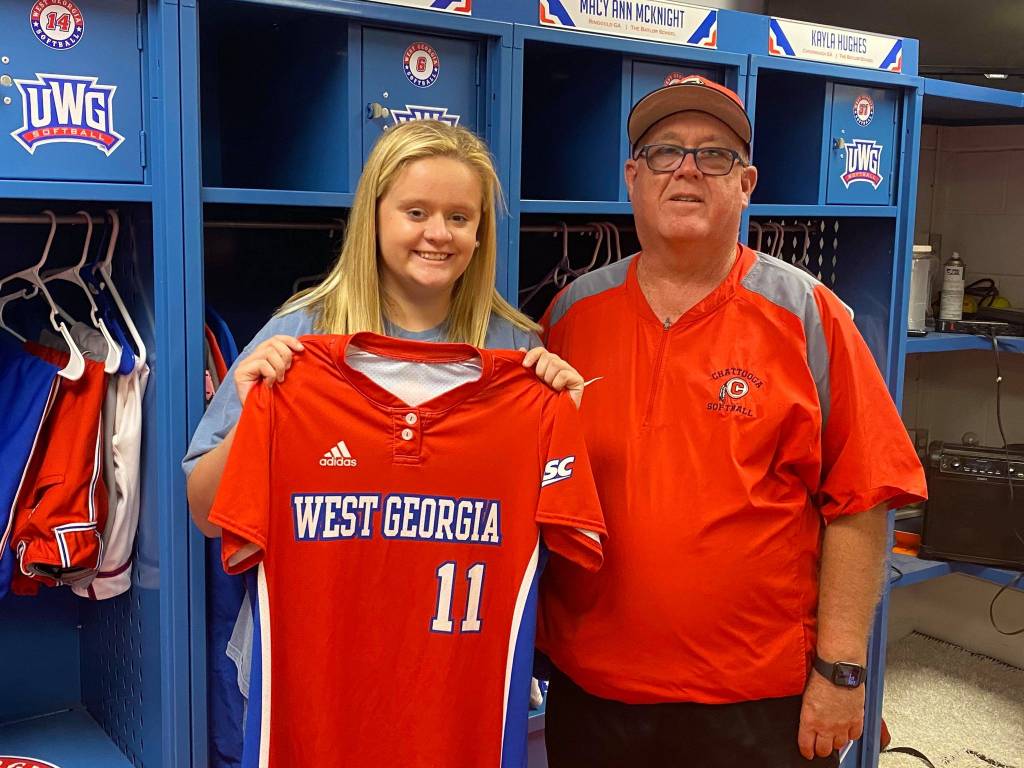 Besides his granddaughter Coach B will have five other seniors this season, the most he’s ever had at Chattooga.

The Legacy and Legend of Coach B

Coach B says that while he still enjoys coaching and loves being around the kids, he realizes it is time to retire.

“I thought about it long and hard, I just feel like it is time. The COVID I had in September, I don’t have the energy I used to,” he said.

“I have had great times coaching. Baseball wise At Trion winning the region championship was very special, here at Chattooga to have a winning record when I first started coaching and making it to the playoffs in 1988. Coaching softball at Trion was fabulous, we went to state back-to-back, going to Columbus is just great. Softball at Chattooga, when I took the job in 2010, they had not had a winning record in a couple of years, first year here my record was 12-12 and since then we have gone to state four times.” In fact, if his girls advance to state this year, it will be four years in a row, marking every year on the team for the seniors.

When asked what he wanted his coaching legacy to be, he said, “that I worked hard and cared for the kids.”

Coach B is the first to admit he has mellowed over the years coaching. “I have some of my old players come up and ask, “Coach what’s wrong?” I say, “What are you talking about”, “Coach if we’d done that you would have run us to death.”

In the old baseball days, Coach B was the definition of old-school.

The 1980’s were a different time in high school sports. There was no such person as the lovable, grandfatherly “Coach B”. There was only Coach Bennett.

Shane Tucker who played for Coach Bennett shared this memory:

“He would hit infield practice wearing a belt-like apparatus around his waist with a dozen or so baseballs inside it. He did not like wasting time at practice, every minute was planned, so having multiple baseballs available sped things up significantly. Infielders had to be prepared because if you missed one, another would be coming at you immediately.

One day I had a bobbled quite a few and he just started machine gunning them at me one after another. I had no chance to catch them all, so I threw my glove down and ran toward the center field fence with baseballs whizzing over my head. He moved around the IF, including at that time Superintendent Jared Hosmer, and I snuck back to my position at shortstop.

At that moment, our catcher overthrew second base and Coach Bennett went berserk. I looked up and saw a bat, his fungo, spinning straight at my head. I dove face down into the dirt and landed right beside my glove which was still lying where I had dropped it when I ran away earlier. The bat bounced out to the OF as he screamed for us to get to our bases. That meant lots of running was coming up. He is probably the reason that I still run.

And the funny thing is, we all loved him to death. He cared about us and made us better players and better people. He intentionally made practices hard so the games would not be. He was easily the most influential teacher/coach in my years at Chattooga High School. I have since been blessed to work with him as a colleague and coach baseball with him for one year at CHS. He has a heart of gold, a wonderful family and a desire to help young people be the best they can be.”

Having coached for 45 years of course there are some wishes for do-overs: “In baseball, when I was at Trion, we were at Bowdon, I wish I had made a call I didn’t make, if I would have bunted, we would have had a chance to win, that kinda haunts me.” He recalls games where he left in softball pitchers maybe a little too long.

And then there is 1983, the year Trion Baseball won the state championship, and he had made the move to Chattooga–“I had coached those guys since they were in the ninth grade, felt like it was my state championship too.”

He’s been around so long he has coached players parents, like Jon and Allie Mitchell. ‘To be able to coach the parent and then their child it is very special.”

The night after current Chattooga softball player Ella Hurley got injured in a car accident, Coach Bennett opened up his field for a community prayer, “we had close to 150 people here, and it was not just Chattooga people it was Trion and Chattooga. The community cares about each other.”

“Coach Richie and I have a got a program started I hope the next coach comes in and keeps the program going strong,” Coach B says of his successor.

His last day at Chattooga High School will be December, his last day on the field is yet to be determined, there are hopes his last season will be capped off with a State Championship.

Chillaxing with Coach B

Coach B’s current chill time is working at the field, “my chilling time is down here working, that’s what helps me get things off of mind and helps me relax….. Ben, my grandson loves to fish, I may go fish with him. I will have to find me something to do, I can’t just sit around, I will go crazy…”

Coach B had better not get too comfortable in retirement, Emma already has plans for him, “when the times comes, and my softball career is over I’m planning on pulling my Pop out of retirement helping me coach a team!”