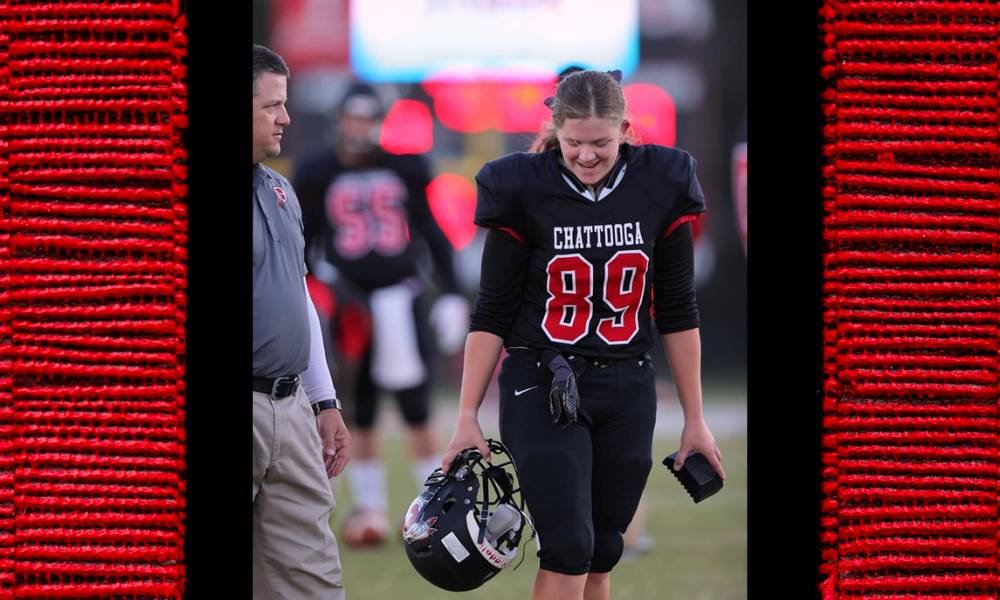 Caroline Hodges kicked her way into the record books Friday night becoming Chattooga’s all-time career PAT leader. She also is the first female to score points in football for CHS a record she claimed four years ago.

AOG: How does it feel to break the record for PATs?

Hodges: It feels great to be able to say I broke a 53 year old record for PATs. It is nice to see all of my hard work pay off.

AOG: Was breaking the record one of your goals?

Hodges: Breaking the record wasn’t one of my goals. Honestly it never really occurred to me that it was possible. I always just strive to do my best and that’s all I focus on

AOG: What’s it been like to have your Dad as a coach?

Hodges: Having my Dad as a coach has been awesome. He is an amazing coach and it’s an honor to be able to play for him. We work really well together and work to figure out what the best course of action is for our special team units. I really couldn’t have done this without him.

AOG: What have you learned from being a football player?

Hodges: I have learned to not worry if I mess up, just come back stronger next time. I have also learned that with hard work and dedication I can accomplish my goals and do what seems impossible.

AOG: What’s next for the Indians?

Hodges: It’s looking like our next game will be against Haralson Co. on the 12th, unless Coosa upsets Pepperell.

AOG: What will you miss most about football?

Hodges: I will by far miss playing for my Dad the most. I will also miss the feeling of stepping out on the field and showing that all my hard work has paid off.

Caroline’s Dad, Chris Hodges the Indian offensive coordinator, had this to say about coaching his daughter. “It’s been a great experience, especially with the guys and coaching staffs who supported her. Of course, she absolutely earned it on her own and she’s just gotten better and better. She’s able to hit from 45 yards out now.”

Coach Hodges when asked about Caroline’s work ethic said, “she has probably as good a work ethic as anyone I’ve coached in 22 years. When I’m with the QBs, she works on her own and we just steal practice time when we can.”

For Caroline it’s on to the next record, most PATs in a single season.