FCAA Backs Away from COVID-19 Forfeit, Awards Co-Champions for a Game That Was Never Played 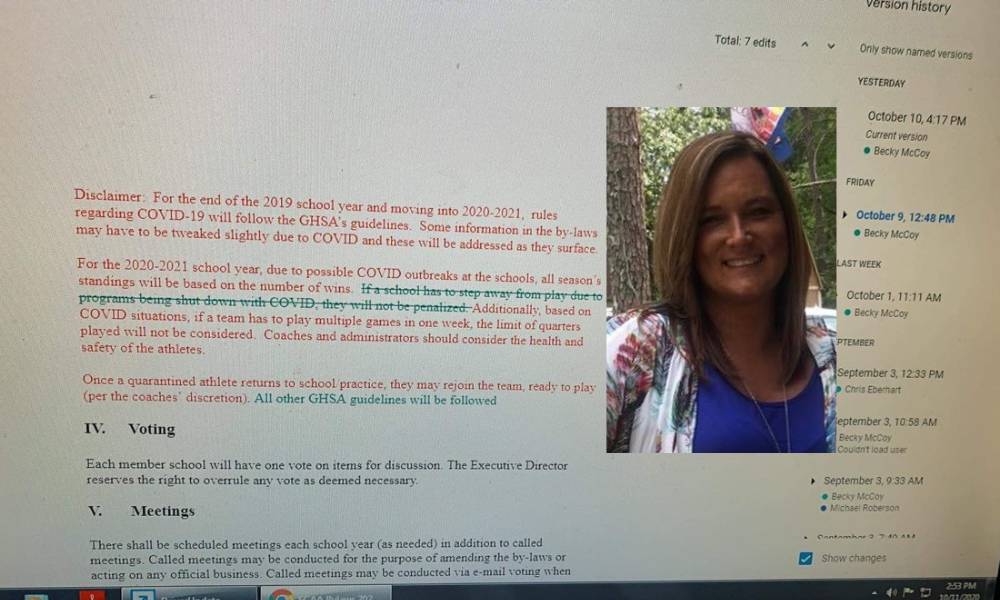 Though the Middle School Championship game was never played, the Floyd County Athletic Association (FCAA) has awarded a Championship to Ashworth, taken it back, made a moderate offer to appease both sides, and has now deemed both teams ‘co-champions.’ The unplayed championship and dual award follows a previous matchup between Chattooga and Ashworth which resulted in a 41-6 victory for the Chattooga Indians.

In his last year as head coach of the Chattooga Middle School football team, Jeff Bullen has been a part of a historic, undefeated season where his Indians have outscored their opponents 196-45, with the starters only giving up 6 points the entire season. Now the battle he is up against is not being played on the field, but instead with the administration at Floyd County Schools.

The Chattooga Indians were set to play for the FCAA championship game on Tuesday, October 6 against Ashworth Middle School of Gordon County. Ashworth asked to have the game delayed because the school system was on Fall Break. Coach Bullen agreed to reschedule the game for Thursday, October 8th.

On the morning of October 8th Chattooga Middle School football team was placed under quarantine for a positive Covid-19 case and had a verbal agreement to reschedule the game for October 20th.

Becky McCoy, Principal of Pepperell Middle School and part of the executive committee of the FCAA, immediately weighed at 11 am in saying:

“From my understanding, the football player from Chattooga received his positive test this morning. This does not warrant a team quarantine and so the game should be played today. If our by-laws do not address an issue, we refer to GHSA. Per Dr. Glenn White, GHSA President, if a team has to quarantine during the playoffs (which this is the equivalent), then their season is considered over and must forfeit. Jeff, please advise Coach Lawson at Ashworth if this game will happen today or if it will be a forfeit.”

Although Mrs. McCoy felt the positive case did not warrant a team quarantine, the administration of Chattooga County Schools has other protocol they follow:

“When we were told about a positive case that existed with one of our football players, Mr. Martin contacted the DPH and based on their guidelines for this positive case we quarantined our football team.  As you are aware, the DPH doesn’t advise us about what decision to make, but they do provide guidelines that we must follow when making best decisions about the health and safety of our staff and students.  The safety and health of our students is our priority,” Chattooga Schools Superintendent Jared Hosmer said.

The school system told Coach Bullen he must quarantine the entire team.

Furthermore, the FCAA bylaws did have a statement concerning Covid-19 shutdowns: “If a school has to step away from play due to programs being shut down with Covid, they will not be penalized.” The statement was ignored by the FCAA and later removed.

At 1 pm, Ashworth Middle School Coach Blake Hilley said he had “told coach (Bullen) we MIGHT could (reschedule), but I would have to check with administration. So the administration has said ‘No’ to the 20th and so do I.” With that statement, Coach Hilley announced his refusal to try to make the game up and after ignoring the FCAA bylaws, forced a forfeit for Chattooga.

A forfeit is considered a ‘loss’ by the forfeiting team. Chattooga attempted to appeal the forfeit decision, but the FCAA voted unanimously to uphold the forfeit without giving Chattooga a chance to present their case in person or by Zoom.

The FCAA Executive Committee met today to review the appeal from Chattooga regarding the forfeiture of the championship game due to quarantined students. After hearing the situation and reviewing the email exchange, the decision was unanimous (5-0 vote) in upholding the decision to follow GHSA guidelines that state “during playoffs, if a team has to quarantine, then their season is considered over and must forfeit”.

Voting in the Executive Committee were:

At no time did McCoy reference in the email exchange the FCAA guidelines in regards to Covid-19 shut downs. A statement she took out of the bylaws at the same time she added the statement All other GHSA guidelines will be followed.

Over the weekend, AllOnGeorgia sent multiple inquires to the FCAA board asking if the Board believed the decision to enforce the forfeit was viewed an penalizing Chattooga Middle School and seeking clarification on why the statement was removed.

Mrs. McCoy was the only response from the board:

“That was not removed from the by-laws. It was the part we discussed as we were making the decision. However this part of our COVID guidelines was for regular season schedules and standings. We didn’t have anything in our bylaws for playoffs and championships so we had to rely on GHSA.

If it was removed yesterday (not the 8th when all this happened), it was unintended and probably happened when we were discussing things. Thank you for letting us know that it was not put back in there.

We are currently trying to work on some solutions but those decisions will come through the schools and not the media. They can release that info to you.”

“Becky McCoy sent me an email tonight stating that the executive committee had met Sunday afternoon and unanimously voted to make us co champs along with Ashworth. She said Ashworth requested it and they voted. I will let you know of my decision tomorrow.”

While this announcement does seem like the FCAA Board realizes they made the wrong decision upholding a forced forfeit over a Covid-19 quarantine, it still does not resolve the issue. According the the FCAA bylaws “all season standings will be based on the number of wins.” If the FCAA was to follow this bylaw, undefeated Chattooga beat Ashworth in the first matchup, in a lopsided 41-6 victory. CMS’s  record is 6-0, AMS’s record is 5-1.

GHSA Executive Director Robin Hines also offered his insight into the situation over the weekend, in an response to an inquiry he said:  “The GHSA doesn’t govern MS sports. It seems you have time to quarantine and have championships.”

Coach Bullen sent the following email to McCoy at 9 am Monday morning, “due to time constraints pertaining to achieving a Championship game played in Summerville, I accept your decision.”