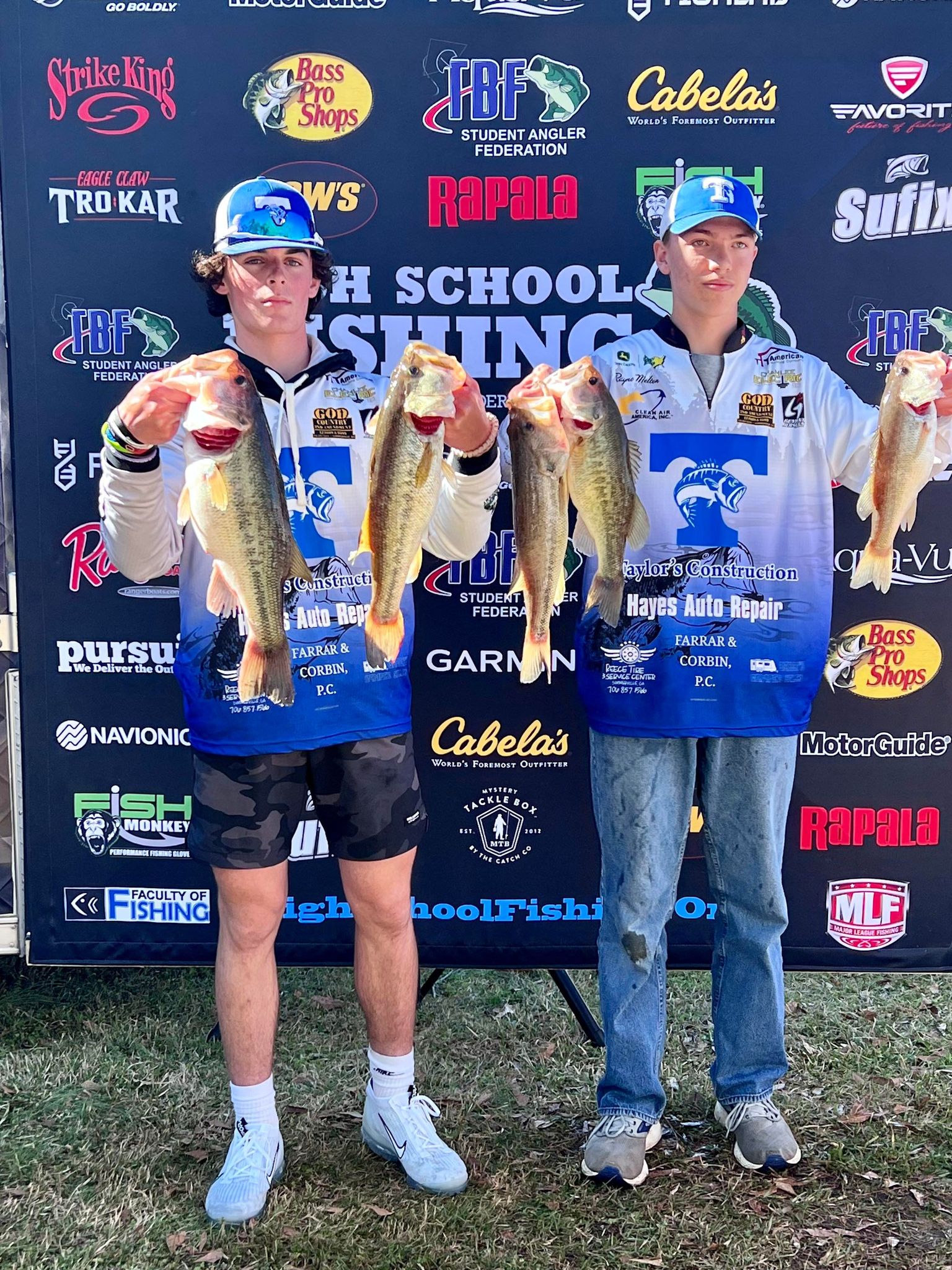 This weekend Melton and Willingham won the West Point GHSA (Georgia High School Association) tournament. There was a total of 232 teams, a limit of five fish, and they weighed in 16.10 pounds. The 1st place finish qualified the duo to fish in the State Championship at Clarks Hill Lake on May 14th, and also the National Championship on Lake Pickwick June 22-24.

AllOnGeorgia reached out to Rayne and Ethan to find out more about them and the sport they love.

Ethan Willingham is a freshman at Trion High School.

Willingham joined the bass fishing team in 8th grade, and this is his first year fishing with Melton. When asked to describe a competition day Willingham had this to say: “We wake up at around 4:00 a.m. depending on where the tournament is, blast off is at safe light, boats are called to blast off by boat number, we fish all day, we have to be back in for weigh-ins anywhere from 3-5 p.m., depending on what tournament it is and number of boats.”

“Bass Fishing is a sport that is on the rise all across the country in high schools and colleges, fishing is different than other sports, because you are not doing anything athletic, but bass fishing was one of my first loves, and I enjoy it very much,” Willingham added.

When asked about winning the State Qualifier at West Point, Willingham said, “when we were on our way to weigh in at 4:45 p.m., I knew we had a lot of weight for that lake, but I was not sure what we would place. To win this tournament was something I have wanted to accomplish from the beginning of this season, to qualify for the state and world championship is something I have always dreamed of and I’m glad I have the opportunity to do this.”

“This sport is a very loveable and enjoyable, fishing is. I give all glory to the Lord.”

In addition to bass fishing, Willingham plays football for the Bulldogs. His favorite class is science and his favorite teacher is Mrs. Stamey. His GPA is a 3.8. 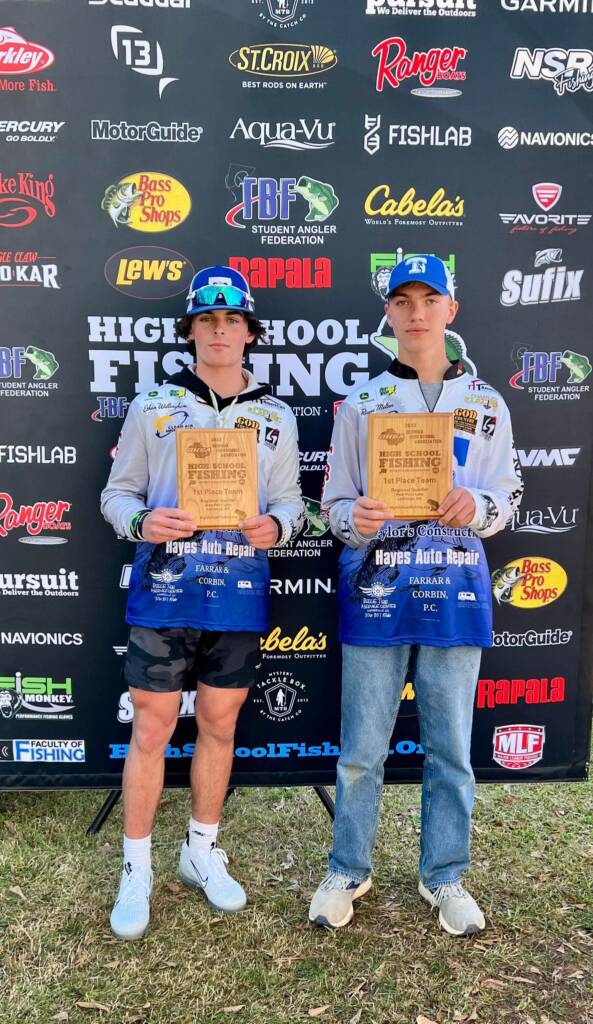 Melton is also a freshman at THS. “This is our first year getting to fish in the Georgia High School Association. I have been fishing on the Trion Bass Team since 6th grade in the local schools team fishing league,” Melton said.

“There are not different positions in fishing like baseball and football. There are two student anglers per boat and a boat captain whom is an adult that drives the boat for the two anglers. The two anglers are a team,” Melton explained.

For a high school bass fishing team Melton said, “a normal fishing day consist of getting up at 3 a.m. or 4 a.m. in the morning in order to get to the lake in time for the start of the tournament. Each team draws a number to determine the order their boat will take off. Take off is at safe light. Each team will fish on the designated lake at which the tournament is held until a determined time set for weigh- in which is usually 3 p.m. for our tournaments, so you usually have about eight hours to fish.”

Teams are allowed to weigh-in their five heaviest bass caught throughout the day. At weigh-in the teams place in the tournament according to how much their fish weigh.

“You are only allowed to use artificial lures. No live bait is allowed. Most people think of fishing as seating in boat throwing your line out and relaxing, but when tournament fishing you are constantly casting and reeling. You are trying to be as efficient and effective with the eight hours you have to fish. You are constantly trying to cover water to pattern and figure out where the fish are setting up on various pieces of cover in the water and what type of lures they are reacting. Also a lot of variables effect how the fish will react that day. Such as whether it is sunny or cloudy, windy or calm, hot or cold, raining, or even snowing. That is what I like about bass fishing. Each day is different and it is like solving a puzzle each time you go. There is no better feeling than when you figure that puzzle out and have a successful day of fishing,” Melton said.

When asked about winning the State Qualifier at West Point Melton had this to say, “as far as winning the tournament this weekend was the happiest experience in fishing I have ever experienced.”

“I have fished a lot of tournaments with my Dad, but this was by far the biggest tournament I have ever won. It is very rewarding to go out on a lake that you have never fished before and figure out that puzzle better than 232 teams across the state of Georgia and win. Words cant describe the feeling I had Saturday when I knew we had won. I really appreciate the time my Dad has spent with me over the years teaching me how to bass fish. Fishing has become a passion that I love dearly.”

Melton does not play any other sports because he said he wants to fish year around.

“I am thankful that Trion High School is participating in the fishing league and that GHSA has recognized bass fishing as a sport.”

Future plans for Melton: “When I graduate from Trion, I want to go to college and fish on a college fishing team and possibly get a scholarship for fishing that colleges are giving to students. Bass Fishing has become the fastest growing sport in high schools today.” 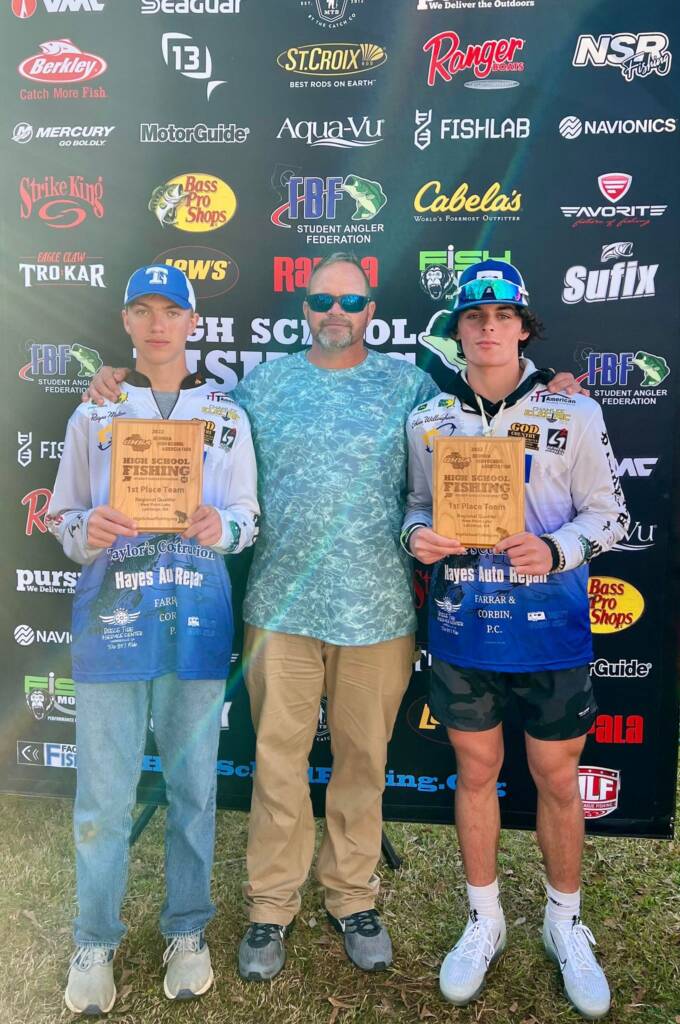 Rayne Melton’s dad, Andy Melton is the captain of the boat.

The win of the GHSA state qualifier at Lake West Point, qualified the team to fish in the State Championship at Clarks Hill Lake on May 14th, and also the National Championship on Lake Pickwick June 22-24.