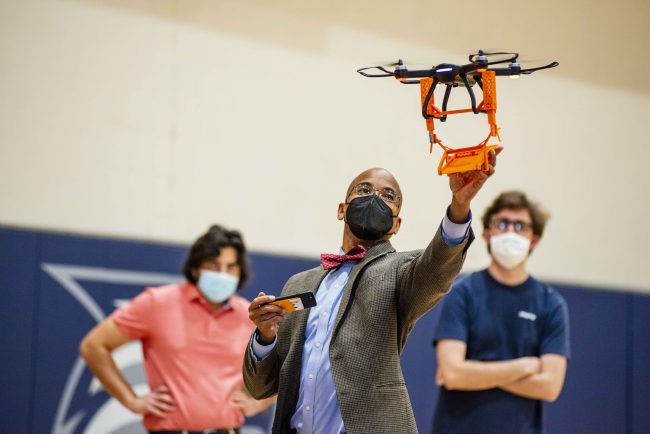 The high schoolers have spent months working with their STEM teacher, a practicing engineer, and a Georgia Southern engineering student, to design an excavation tool for the EDC 2021 theme “Eagle Remotely Operated Aerial Recovery 2.0 (ROAR).” When attached to a drone, the tool can be used to collect lunar soil and rock samples.

Josiah Hacker, a sophomore civil engineering student, is one of the seven student coaches participating. He’s spent at least one day each week since January working with a team of home-schooled high school students.

“Right now we have six people on our team, plus a project mentor and a teacher,” Hacker said. “I’ve been running meetings, helping, giving them feedback on their ideas and helping them figure out what to do and what not to do.”

Competitors design a drone-based, 3D-printable tool for excavating and delivering lunar soil and create a video presentation documenting their engineering design work, the physics of drone flight and the feasibility of lunar drones.

This is the second year that Hacker has been involved with the event as a student coach, and his role has evolved. When COVID-19 interrupted the 2020 event, many teams dropped out of the competition. With the encouragement of Wayne Johnson, Ph.D., professor of mechanical engineering in the University’s Allen E. Paulson College of Engineering and Computing, Hacker created a home-school team and assisted them in catching up with the design process for last year’s event in November. This year, he returned as a mentor for the home-school team.

Though this is the seventh EDC for Georgia Southern, it is the second year that the EDC has used a drone-based design. This year, however, the competing students had the opportunity to see their designs in action. Last year, due to COVID-19, the planned drone race was replaced with video presentations, leaving student designs as theoretical. This year, the 3D-printed designs are not only being used in the final competition, but teams also have the benefit of seeing their design in a testing phase in advance of the final event.

Johnson noted that the transition in competition design led to a wider variety of student participation.

“Because of COVID they had to create a video presentation,” Johnson said. “We have found this is actually bringing in more high school students who may not have thought about participating in an engineering type design challenge. Now the teams can work with fellow students who have more of a multimedia or visual arts background that can help them with putting together a very dynamic, engaging video presentation of their design.”

Johnson believes that this opportunity through Georgia Southern has provided the participants with genuine engagement with real-world engineering concepts and a chance to see what a future career in engineering could look like.

“It turns out that COVID was an action opportunity to give students some exposure to some of the things that might happen in the real world, because a lot of these larger companies are located in multiple places,” Johnson said. “They’re meeting virtually, they’re not always able to meet in person. We’re actually able to simulate that, unintentionally, because of COVID.”

Johnson is excited about the doors this competition has opened for high school students in recognizing, not only the benefits of engineering, but more importantly their own abilities.

“They can solve real-world problems, because this idea of developing some sort of device to collect soil, whether it’s on Mars or on the moon, that’s something NASA engineers had to do,” said Johnson. “They can make a difference if they put their minds to it.”

Student mentors have also benefited from participation. The event has broadened Hacker’s understanding of not only engineering concepts, but also the process of project management, something he had not previously considered.

“This competition has given me and helped to strengthen my ability to lead projects, and especially in a technical engineering setting,” Hacker said.

The greatest surprise Johnson found from this competition is the breadth of creativity shown by the high school participants.

“I was blown away by what the students came up with (last year),” Johnson said. “Their work was on a college freshman level already. Watching those presentations and seeing their reactions, that was probably the best part of it and certainly what I’m looking forward to this year.”

The presentations and announcement of winners will take place virtually on April 17. To watch the online competition, RSVP at http://tiny.cc/virtualedcrsvp.