When Bulloch County stopped handling recyclables two years ago, John Cook headed to his shop, tinkered with his machines, and created a process that turns plastics & glass into a durable product usable for landscaping, driveways, and other concrete projects. 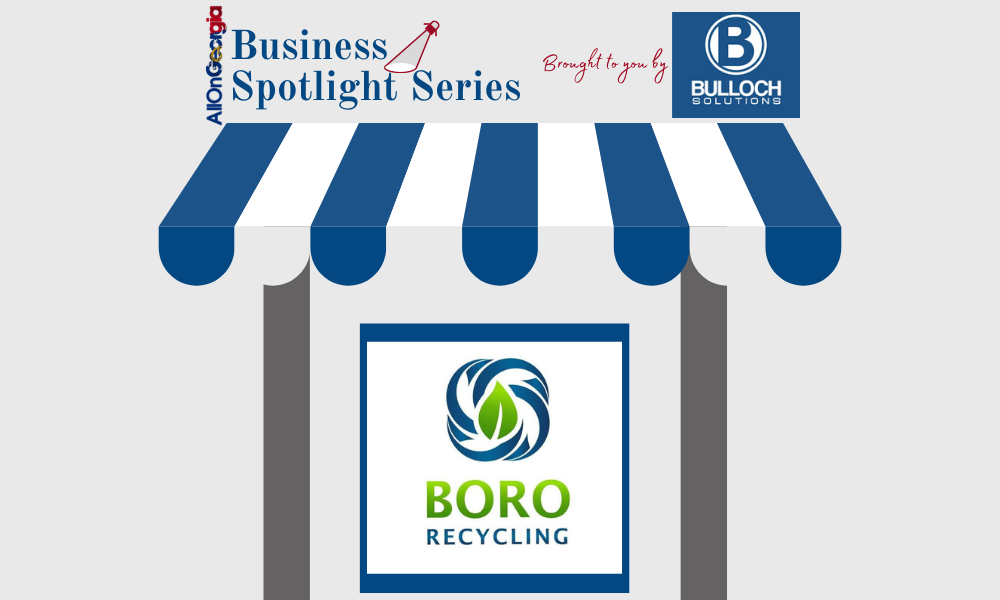 The AllOnGeorgia Business Spotlight Series features the owners, employees, and operations of local businesses in Brooklet, Portal, Register, Statesboro, and unincorporated Bulloch County, which serve as the backbone of our community.

The series is sponsored by Bulloch Solutions.

When John Cook found out that he no longer had a place he could recycle plastics into glass, he made a hobby out of an invention. But now that invention is making a career out of a hobby.

The project started back in August 2018 after Bulloch County stopped accepting recycling at its convenience centers. Cook says he went to the trash site one day to find the plastic containers were gone and the attendant directing people to throw their recyclables in the bulk waste container. A troubled Cook put his bags of recyclables back in the car and returned home to ponder what he could do to handle his family’s plastic.

Cook says he was taught at an early age to care for the land and conserve resources, principles he has worked to engrain in his children as well. That foundation led him to explore a few options close to home…in the shed in the backyard. The result: he developed a few machines and a process for combining plastics and glass together to make a product nearly everyone can use.

What started as a hobby in November 2018, quickly evolved into an expanding project. Cook began reaching out to friends to ask if he could have their recyclables as well, realizing that there was a need for the process he created on the user and the consumer side.

With the help of Dr. Lissa Leege at the Georgia Southern Center for Sustainability, Cook organized a small group of eight houses for whom he would provide a curbside recycling service. Cook would collect plastics on a weekly basis and take them back home to his shop. There, he continued to process hundreds of pounds of recyclables.

With the near instant success, Cook expanded and officially launched ‘Boro Recycling’ in January 2019, even landing several restaurants and businesses as customers with on-site containers.

Through word of mouth recommendations and Facebook, he grew his customer base to over 250 households and businesses in the community, a considerable feat given that the City of Statesboro’s previous curbside recycling program served approximately 500 households. Now, Cook is working his way through the patent process and other legal matters, which is expected to be complete in February of this year. The hope is to have a business model that can be replicated across the state and the southeast.

The resulting product is also a growing enterprise and has even passed EPA testing, Cook says. “You test leaching to make sure there are no chemicals that are leaching out of your product. This doesn’t.”

“I created this new process where I take plastics and glass and combine it to make a silicon dioxide multipolymer conglomerate, which is just a fun word to say ‘rock,’” he told AllOnGeorgia. “But that rock has some really cool properties to it because you combine certain physical properties of plastics with the physical properties of glass, so you get this product that is strong, extremely durable, and easy to form into different shapes.”

particular, have been a big hit and can be purchased for smaller projects at McKeithen’s True Value Hardware in Statesboro.

December 2020 also concluded the 1-year test with the City of Statesboro, in which the city utilized his product as an asphalt patch over a pothole. The location was picked by the city for weight, as opposed to volume of vehicles, and Cook’s product withstood the elements for the full year. That’s bound to expand how the product is used in the future.

The best thing about the project, to Cook, is how the process is all encompassing. Where traditional recycling only uses clear plastics like water bottles and milk jugs, leaving everything else to be thrown away, Cook’s project makes use of everything.

“In traditional recycling, you go after a specific type of plastic. Most of the recycling in the U.S. is either No. 1 or No. 2 plastic and as far as plastics are labeled, they are labeled 1-7, which actually works out to being several thousand different types of plastic. You have to go through an extensive sorting and cleaning process, using lots of resources for the company that’s doing the recycling, whereas my process takes everything without cleaning and separating.”

It’s a process that isn’t operating in the U.S. right now, but it’s a niche for Cook in Statesboro.

His hope is that the business will continue to expand. On average, he collects approximately 500 pounds of plastic per week, which, by his estimates, only accounts for roughly 3% of the plastic that is consumed in our area.

“If I were able to grow this to where more households were actually recycling, not so much from an emotional standpoint of ‘Save the planet,’ but from a practical standpoint of ‘Our resources are limited, our landfills are not bottomless – they’re going to run out eventually,’ that’s ideal. We’re wasteful and it’s just the right thing to do.”

Local Teens Are Out to Make a Difference
Sixth Grader at WJMS wins national Prudential Spirit of Community Award
Posting....