A sixth grader at William James Middle School, Ava Mincey, was recently selected as one of two recipients in Georgia of the national Prudential Spirit of Community Awards for 2021. 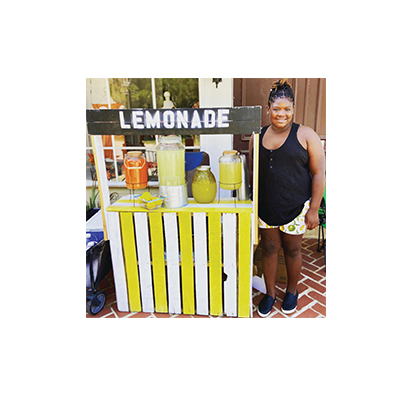 A sixth grader at William James Middle School, Ava Mincey, was recently selected as one of two recipients in Georgia of the national Prudential Spirit of Community Awards for 2021. She will be receiving a $2,500 scholarship, an engraved silver medallion and a virtual celebration with the nation’s other recipients. Mincey was chosen due to her extensive community service with the Alzheimer’s Association and its Walk to End Alzheimer’s, for which she has raised over $2,000 through online contributions, her Walk to End Alzheimer’s team, and by selling lemonade around Statesboro and surrounding counties. She was nominated by her principal, Julie Mizell.

Annually each state and the District of Columbia (D.C.) choose one honoree from middle school and one from high school. Mincey was selected as Georgia’s top middle school level youth volunteer. The high school recipient is a senior at Alpharetta High School. Honorees are chosen based on their service initiatives, their impact and effort, and personal growth over the course of the project they conduct. Over 21,000 students applied or were nominated, and only 102 state honorees in the nation were chosen.

The award qualifies her to be selected to receive a Volunteer Service Award from the President of the United States. Results will be announced this summer.

From Bulloch County Schools website: Known as Ava’s Lemonade, she dedicates this effort to her late great-grandmother, Daisy Littles, for whom her fundraising team is also named. Besides these initiatives, she also advocates for personal devices for caregivers that alert them to the exact location of their Alzheimer’s patients.

“I feel like if she was still here today that she would support me more than anybody else,” said Mincey, referring to her great-grandmother.

Mincey’s community service has become a family affair. Her two brothers and parents often help her with the lemonade stand. Her father even helped her create the lemonade recipe she now sells. She has expanded the stand to include a variety of juices made from fresh fruits such as pineapples, peaches, strawberries, and raspberries.

“I think Ava has affected the community in such a positive way,” said her mother, Yolanda Mincey. “Through her volunteer efforts, she has met many amazing people that have encouraged her. She loves helping others on a daily basis.”

Her extensive hours of service have also qualified her for the President’s Volunteer Service Award. If selected she will receive an award and certificate from President Joe Biden.

“Above all, we want to take this opportunity to thank you for your compassionate dedication to improving the lives of others,” wrote Charles F. Lowrey, the chief executive officer of Prudential and Ronn Nozoe, CEO of the National Association of Secondary School Principals, in a joint letter to Mincey. “The kind of vision and commitment you have demonstrated is extremely important to the future of our neighborhoods, our cities and our nation.”

According to a press release issued by Prudential, the awards have been conducted annually by the company and the National Association of Secondary School Principals (NASSP) for 26 years.

“While we’re especially proud to celebrate this year’s 102 State Honorees, NASSP applauds every student who’s found a way to volunteer this past year,” said Nozoe.