Fullback regarded as one of best all-time 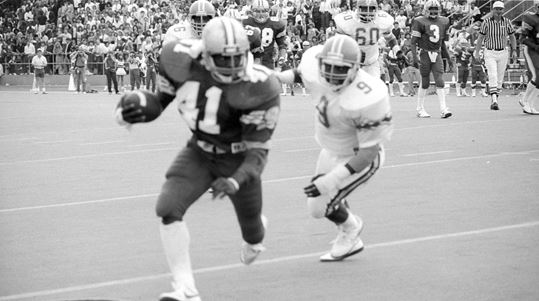 Tony Burse went home to Murfreesboro the weekend of Oct. 5, when he was inducted into the Blue Raider Sports Hall of Fame.

Middle Tennessee experienced some of its finest seasons on the gridiron during the mid-1980s.

Thanks to the likes of legendary running backs Vince Hall, Gerald Anderson and Dwight Stone and quarterbacks Marvin Collier and Mickey Corwin, the Blue Raider offense was explosive alongside a defense that gave up only 14 points per game over a three-year stretch from 1983-85.

They advanced to the 1984 NCAA I-AA semifinals, then followed by winning an Ohio Valley Conference championship in an undefeated 1985 regular season, reaching a No. 1 national ranking before falling in the quarterfinals to eventual champion Georgia Southern.

All of the success those teams had may not have been possible without the toughness and tenacity of fullback Tony Burse. Now, more than 30 years later, he’s getting the ultimate recognition by entering the Blue Raider Sports Hall of Fame.

Fullback Tony Burse dominated his position like no other during a sterling career at Middle Tennessee. The gridiron great will be inducted into the Blue Raider Sports Hall of Fame during ceremonies, Oct. 5, 2019. Congratulations Tony Burse!

“I couldn’t be more thankful,” Burse said. “It was the best four years of my life at Middle Tennessee and Murfreesboro. I was treated like gold while I was there … and I wouldn’t trade it for the world.”

In 1983, Burse walked onto Middle Tennessee’s campus trying to take advantage of what he saw as a second chance.

A year earlier, he was about to enter his senior year at LaFayette High School in LaFayette, Ga., with a decision to make about his future playing career: whether to attend Alabama or Auburn.

However, his choice was about to be made for him, and it wasn’t at a school in the Southeastern Conference.

Everything was going great through five games, but in the sixth, Burse broke an ankle, forcing him to miss the remainder of the season.

Distraught, he thought his playing days were over. Renowned Blue Raiders coach Boots Donnelly had different ideas, though.

“As it worked out, we were able to pick up Tony on what I refer to as a ‘rebound,'” Donnelly said. “It didn’t work out at either of those two schools, but it definitely worked out for us.

“Tony Burse is one of the best football players that I’ve ever coached. I’ve never seen anyone who could flat back a linebacker as well as Tony could … and I never could understand why he was so late being chosen [for the hall of fame]. He’s that good of a football player.”

As soon as Burse arrived in Murfreesboro, he made a big impact as a fullback.

He was a bit of a pioneer with his ability to both catch and block out of the backfield, and even led the team in receptions during the memorable 1985 campaign, catching 27 balls for 266 yards. It was his incredible blocking skills that set him apart, though.

Burse was placed on the All-OVC team in 1985 and 1986, then became the 17th Blue Raider all-time drafted into the NFL when the Seattle Seahawks took him in the 12th round.

In his four years at MT, Burse led the way for Hall, Anderson and Stone to each eclipse 1,000-yard seasons. All three tailbacks were also named All-OVC, and Burse will join Hall (2006) and Stone (1998) in the Blue Raider Sports Hall of Fame.

“The guys that I played with were wonderful,” Burse said. “It was like love at first sight. Those four years playing with those guys … that was the squad. They made my job easy.”

During his first day in Murfreesboro as a college freshman, Burse’s mother told him not to come home until he was done with college and football.

Following a 14-year professional playing career that took him from the ‘Boro to two different stops in the NFL, then the World League of American Football, Arena League and Canadian Football League, Burse finally returned home to LaFayette in 2008, where he’s lived since.

“Going to Middle Tennessee was the best second chance I ever took advantage of,” Burse said. “I couldn’t be more honored.”

This is part of a series introducing the 2019 class of the Blue Raider Sports Hall of Fame.