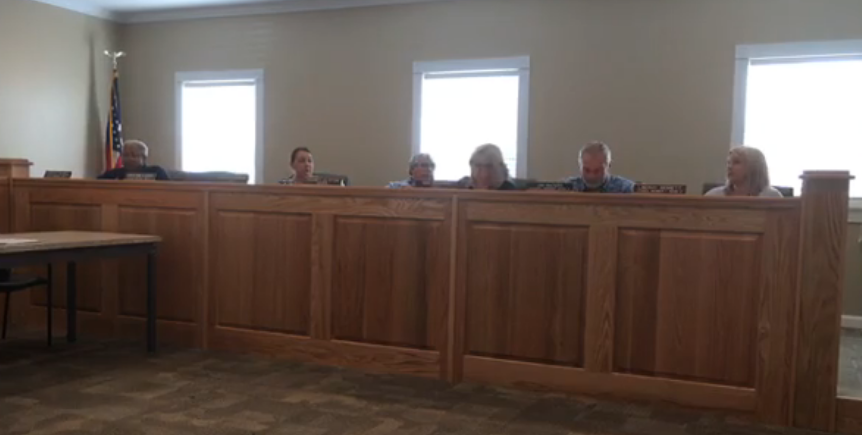 A question by a citizen at the end of a city council planning session Monday revealed that the City of Reidsville purchased a $134,000 limb truck without a vote by council.

A citizen asked members of council when the vote to purchase the truck took place, after it was mentioned by the mayor that the new truck was in the parking lot if people would like to take a look. “Was it at a city council meeting?” the citizen asked about the vote.

Councilman Curtis Colwell said, “Yes,” that the vote took place at a council meeting before Councilwoman Lindsay Bennett said, “We didn’t have a meeting.”

“We actually took care of that after the fact,” Mayor Sydney Clifton said

Clifton said the City was in possession of a truck that could not be repaired. “We’ve got people raising hands every day about their limbs not being picked up. We got people going around working on the dump truck trying to load them limbs up. And we got to have…we still haven’t paid. We signed a contractor for that [prison] detail and we have to provide them transportation to ride around…we got transportation, we still got to pay, there’s certain things in that contract that we’ve got to do and we’re not doing our part,” Clifront continued.

“I was talking about the limb truck,” the citizen said.

“I know that,” Clifton replied. “This limb truck became available we bought it that day.” Clifton said two other cities wanted the truck the following day.

AllOnGeorgia asked how much the limb truck cost and Clifton said it was $134,000.

“I thought people would be happy to see some new equipment being bought,” Clifton said after the inquiry on the price.

Councilwoman Lindsay Bennett said, “I think the issue is that it wasn’t brought before council where citizens could be privy to it.” Clifton said if they would have waited they would not have the truck, while Bennett said they could have spent time looking for another one from somewhere else after council formally approved it.

Councilman Colwell said it was SPLOST money, so the money was coming from somewhere else.

Councilman Jim Waters said he told Bennett ahead of the purchase that it was going to happen, leading the public to believe that there was discussion about purchasing the truck by phone, which would be a violation of the Open Meetings Act.

The law on purchases such as this is clear. Section 2-136(b) of the City Charter and City Code of Ordinances requires that “purchases in an amount exceeding $3,000.00 may be made only after approval by the city council.” The purchase is also a violation of Sec. 2-164 which says “Neither the mayor nor any member of the city council shall order any goods or services for the city or on behalf of the city without prior authorization from the mayor and council or its designee.

Given that the limb truck was not an emergency purchase, nor was it a purchase made during a declared state of emergency, no extenuating circumstances apply.

A complaint would have to be filed with the City of Reidsville Ethics Committee, which would produce a decision and refer it to the Superior Court of Tattnall County. Section 2-175 of the City Charter says “Any violation of this article is punishable by penalties as provided in section 1-14 and by disciplinary action that may include private or public reprimand, impeachment, or both.”