This is the second rescue of a 3-year-old near the border this week. The first was abandoned in a field by smugglers while the second was separated from her mother while crossing the border. 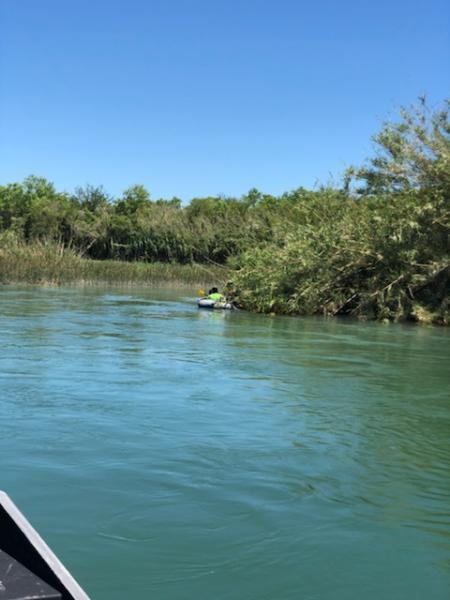 U.S. Border Patrol agents assigned to the Del Rio Station reunited a 3-year-old child after she was separated from her mother while crossing the Rio Grande River in a raft.

This marks the second rescue of a three-year-old child by CBP agents in a single week.

CBP reports that on April 25th, Border Patrol agents from the Del Rio Station noticed 10 people on a raft making their way across the river to the United States. The raft began filling with water and a person had fallen out into the river and was being swept away by the strong current. The Del Rio Station Riverine Unit quickly responded in their patrol boat and rescued all 10 people.

In a press release, the agency report that during processing, agents discovered that a 3-year-old child in the group had become separated from her mother, when the mother stayed behind on the Mexican side of the river. The Del Rio Sector Foreign Operations Branch coordinated with Mexican immigration officials who reunited the child with her mother in Mexico.

“Our Border Patrol agents are doing a remarkable job every day saving lives and averting potential tragedy,” said Del Rio Sector Chief Patrol Agent Raul L. Ortiz. “Thanks to the great cooperation between the Border Patrol and the Government of Mexico, this young girl was safely and quickly reunited with her mother.”

The remainder of the group was processing per U.S. Customs and Border Protection guidelines.

Fort Brown Station Border Patrol agents working near Brownsville, Texas, observed multiple suspected illegal aliens walking north towards a cornfield near the intersection of Southmost Boulevard and Southpoint Road after they entered the United States illegally. As agents attempted to intercept the group, the suspected illegal aliens scattered in the overgrown field. Agents requested the assistance of a Border Patrol K-9 team in an attempt to search the field and, in the process, located a child who was alone and crying.

Agents attempted to locate the child’s parents in the surrounding area of the field to no avail. The young child did not speak well enough to communicate, but had his name and a phone number written on his shoes.

The child was transported to a local hospital for medical evaluation, he was found to be in good condition and released to the Border Patrol. At the station, additional attempts to locate the child’s family were unsuccessful.

A Fort Brown Supervisory Border Patrol agent purchased clothing for the child and fellow agents and CBP officers entertained the youth, watching movies and playing games.  The child was taken to the Centralized Processing Center and remains under the care of contracted child care workers assigned to the center.

The child will be turned over to the custody of the U.S. Department of Health and Human Services, which is the protocol when apprehending unaccompanied children.