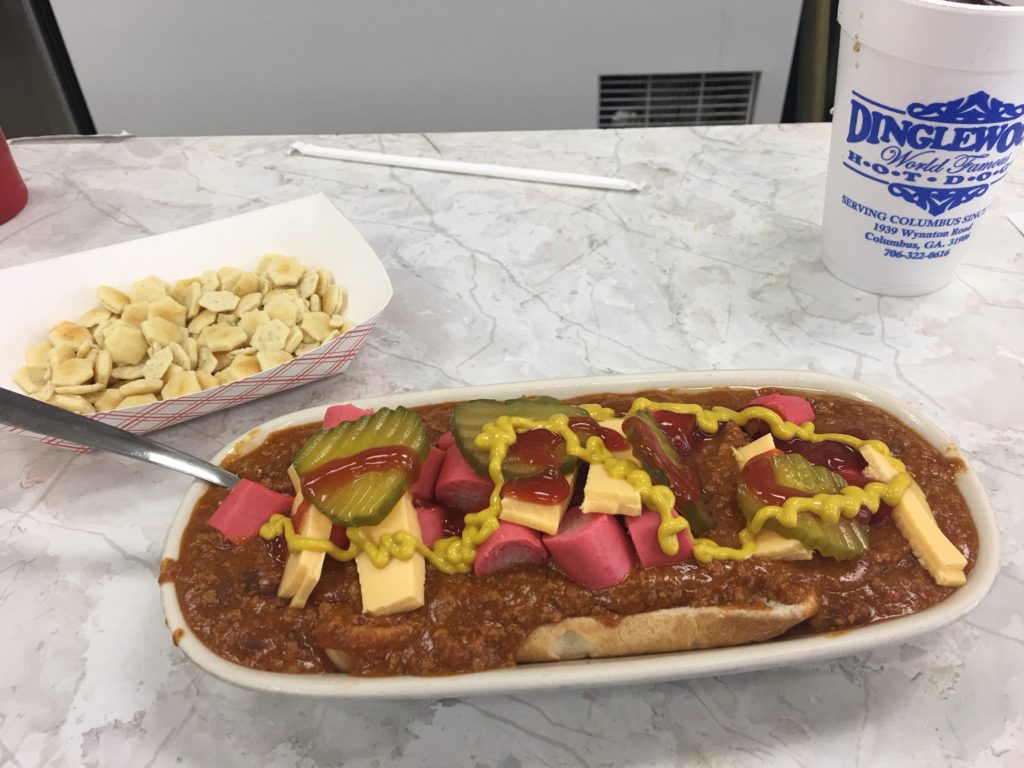 How do you explain his legendary status to someone who’s not from around here? All this small man with the joyful smile has done for the past 75 years is make pots of chili and serve his signature hot dog in a bowl made for banana splits. He didn’t concoct the recipe for that familiar chili and he didn’t serve the first scrambled dog. But that didn’t keep him from growing into a local icon and a beloved figure who on Wynnton Road stood taller than the Aflac tower.

He doesn’t need a last name. Lieutenant said it all.

Even now, some people don’t understand that Lieutenant is his first name — not his rank. To be truly accurate, his legal name was Lieutenant Charles Stevens.

Since he was a teenager attending Spencer High School, he has worked around the soda fountain at Dinglewood Pharmacy — a fixture on Wynnton Road for the past 100 years.

When he was young, he climbed the steep hill from a simple part of town that old timers called The Bottoms. Walking to work up Wynnton Road, he passed mansions built by wealthy planters in the early days of the city. He wanted to work at the drug store sooner, but he had to wait until he was old enough to get a work permit. He puttered around there as long as he was able. A public splash was made when he tried to retire in 2002, but the loyal customers who had turned into his friends did not want to let him leave.

It’s that way now. Lieutenant died on Jan. 2. He’s being buried today. But a city refuses to let him go.

The outpouring of love and grief for this man we have seen these past weeks has been a phenomenon. It erupted at the end of November when he suffered a stroke. Word of his health scare spread across social media and overnight he went viral, an overused word these days that, at the age of 87, Lieutenant probably didn’t understand.

Terry Hurley reared his daughter, Kellie Hurley Oliver, between the shelves of the historic drug store on Wynnton Road that has owned since 1975. And at the soda fountain of the 100-year-old pharmacy he befriended the beloved maker of a dish that became a local legend.

In the middle of this cultural explosion stood Terry Hurley, since 1975 the pharmacist and owner of Dinglewood. Watching the love and concern he has shown for Lieutenant could teach us all something about how to be a friend.

Their friendship began when first Terry bought the pharmacy. The Auburn University pharmacy major  probably thought he was coming there to fill prescriptions for an aging neighborhood that had depended on that drug store since trolleys clattered down Wynnton Road. But it did not take long for the affable druggist from small town Alabama to conclude that the diminutive fellow who made the chili was a living, breathing force. So not long after Terry arrived he and Lieutenant sat down for a private conversation.

Recently, as Lieutenant tried to recover, Terry probably asked that same question: “How do I do this?”

He already knew about the legend of Lieutenant and its connection to the history of the drug store. While his friend was in the hospital Terry had to become the keeper of that legend. and it has not been an easy assignment.

He still had to find time to fill a few prescriptions, counsel with customers, take care of his own troublesome health, help spoil his grandchildren, be at home with his bride, answer calls asking how Lieutenant was doing and — while he was juggling these things — be there for Lieutenant, his friend of 44 years.

“I’ve done nothing that Lieutenant wouldn’t have done for me,” he says.

The scrambled dog was created long before Lieutenant appeared. A forgotten restaurant owner named Firm Roberts served it first, pouring chili over a wiener, and adding a combination of yellow mustard, slicked pickles and oyster crackers. When I moved to town a friend took me to Firm Roberts’ cafe on Cusseta Road and the founder was in the kitchen doing the cooking. I can testify that his version was good.

Then there’s the chili.

Many people swear that the chili at Dinglewood is Lieutenant’s recipe. Some folks credit Sport Brown, the chef when Lieutenant came to work there around 1944. Only didn’t come up with the ingredients either. Terry Hurley knows the truth. He says the chili was first cooked at home by Mrs. Hill, the wife of an early pharmacist.

When they installed in a stove in the drug store, Sport Brown started making the chili there. Later on he showed his protege, Lieutenant, the tricks of the chili pot. More recently, Lieutenant passed on the recipe to Ernestine King, another familiar face behind the marble soda fountain. She retired in May — Lieutenant made a cameo appearance at her going away party — and with Ernestine gone no knows for sure who makes it today.

“But we do wash the chili pot,” Terry says, debunking a legend that the secret is an unwashed pot.

No one will admit they know the secret recipe, which has become almost as much of a mystery as the recipe for Coca-Cola. At a visitation for Lieutenant at International Funeral Home on Friday, someone asked Terry is the recipe was being buried with Lieutenant.

Come to think of it, Terry never answered the nosy guest.

Story after story has been written about Lieutenant, Dinglewood and the scrambled dog. Stories about Columbus High students cutting class so they could have lunch with Lieutenant. Stories that include instructions on how to build a scrambled dog. Stories about how one of the tables in the drug store came from the old Spano’s restaurant in Columbus. Stories that try and explain why teens used to hang out around soda fountains after school.

Other cities have legendary hot dog stands. Think of Nu-Way in Macon, where the menu used to include a poor excuse for a Dinglewood dog. None of these other joints have a front-man like Lieutenant. But long ago, Lieutenant outgrew his trademark.

But try and explain his status as a local legend to somewhere who’s not from around here.

Lieutenant was a beloved fixture on Wynnton Road for 75 years.

“What made him who he was?” I don’t honestly know,” Terry said Friday. “Maybe it was his smile, and the joy he brought to so many people. Maybe it was because he was so honest. I never heard him say a bad word about anybody.”

Terry talked about that talk he had with Lieutenant when he was new to Wynnton Road.

It’s for certain, that nobody has said bad things about the man without a last name. Since his stroke, folks around town haven’t stopped applauding. Terry and his daughter Kellie Hurley Oliver — who was reared among the counters in the store — have been manning three different Internet sites. Since Nov. 2, those sites have averaged around 1,000 sites a day. That’s a thousand each. That doesn’t include the posts on Facebook that were shared and received messages of their own.

Lieutenant had been hospitalized since that stroke on Nov. 2. Terry went to see him every day and in the beginning he would read every message and card to his old friend. Lieutenant interrupted him one day and said something that is hard to believe.

“I never knew I had so many friends,” he said.

In recent months, Terry has written things most people didn’t know about Lieutenant. How he loved music. How he loved to dance and how after the store would close in the afternoon, Lieutenant would dance around the store, trying to teach others his magical steps. How the alley behind the drug store bears his name. How he loved his Mama, and how he took care of her until she died. How he loved to travel and how many of his vacations were taken with classmates from his beloved Spencer High.

One thing Terry didn’t write about was race. Lieutenant was a man of color long before people dealt with civil rights. He was always accepted by people both black and white whether they lived in Carver Heights or Green Island Hills. To his black friends, he was Sonny, a member of Spencer’s Class of 1949. Many African Americans didn’t understand that he was a legend. He was just their friend.

Since his death on Jan. 2nd, a shrine in Lieutenant’s honor has been created near the front door of the historic pharmacy.

White folks didn’t care about his race. He was just Lieutenant, someone many people had adored since they were in grade school. People sent him Christmas cards. They dropped by the drug store on their way to Florida to take a picture with him. Old friends like Aflac’s Dan Amos sent someone over to Dinglewood for a scrambled dog and days later he would send the bowls back to Lieutenant already washed and dried.

On Friday, I dropped into Dinglewood for a signature scrambled dog. My favorite is one with two wieners, crackers on the side, mustard, pickles and cheese. Recently I’ve started adding a few dashes of hot sauce. Oh, and don’t forget the vanilla diet coke. The servers wore T-shirts that had a drawing of Lieutenant on the back and the words “Still Scrambling After 100 Years” on the front.

Tables were filled with old customers who were talking and laughing about the old days. The drug store was crowded, but It was lonesome. Lieutenant nor Ernestine weren’t behind the counter. And I missed them.

I was on my way to pay my respects at the funeral home and when I parked out front there was Terry and Kellie. They came to make some last minute arrangements for the funeral on Saturday. They wanted to be sure there would be seats available for the Dinglewood family past and present.

Lieutenant was at rest, He was nattily dressed, which was appropriate. Terry stood by him. It had been a challenging year for the veteran pharmacist. He had been in and out of the hospital himself. The home his late wife’s parents had built in Mexico Beach had been destroyed by Hurricane Michael. It was devastating to his daughters who had spent so many summers there.

Lieutenant Charles Stevens had passed away, and the Hurley family and the rest of the community was once again in mourning. Scrambled dogs were not being served and Dinglewood Pharmacy was not open for business on Saturday. It was a day for Columbus to pay its respect.

On Friday, the day before Lieutenant was formally eulogized, Terry Hurley stood close to the body of his longtime friend. It was a moment for the pharmacist to share a secret. Reaching deep inside the coffin Terry recovered an unopened pint bottle of Crown Royal — Lieutenant’s favorite alcoholic beverage. Terry had put it there as a parting gift for a friend that Terry will never forget.

And for Columbus, it was a final chance for a city to say goodbye.