SE Georgia Roundup: Wayne gets out of Statesboro with 21-20 OT win 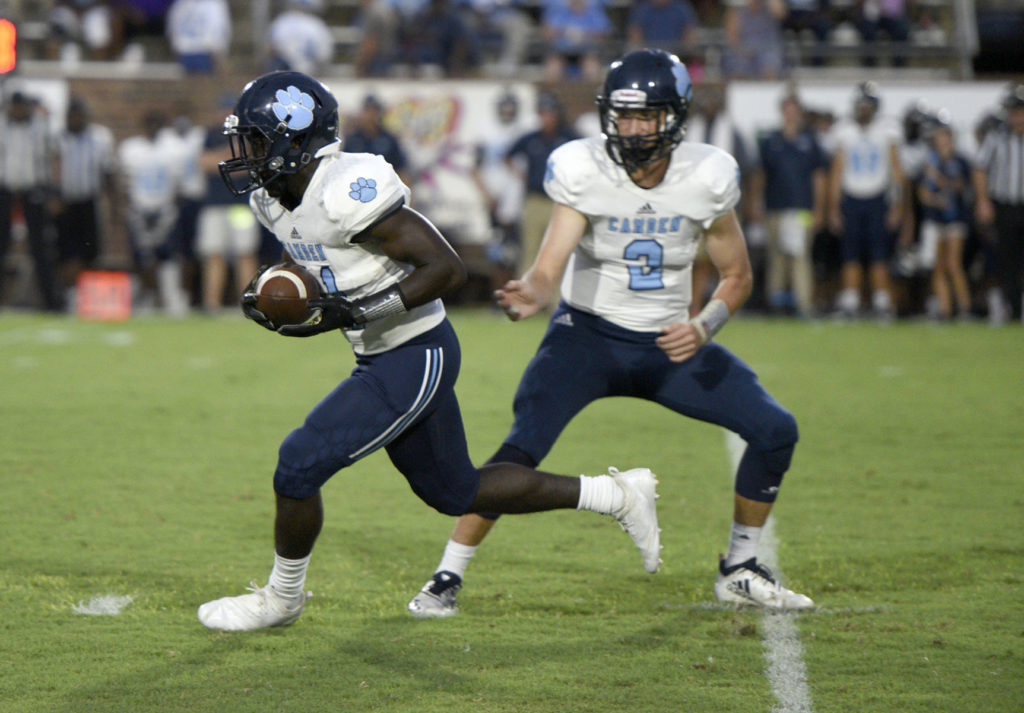 The Wayne County Yellow Jackets got more than they bargained for Friday night at Womack Field in Statesboro, but the Jackets managed to get out of town with a 21-20 overtime victory over the Blue Devils in the Region 2-5A opener for both teams.

The Jackets had to block an extra-point try by Statesboro in overtime to come away with the win.

Junior Logan Pritchard blocked the kick for the Jackets that gave them the hard-fought road victory.

“It was a great surge by the defense. I think he came right up the middle,” said Wayne radio broadcaster Bob Morgan of Pritchard’s game-winning play.

The win kept the Jackets’ unbeaten season alive as they are now 7-0 overall. The Blue Devils fell to 2-5 with their fifth straight loss.

The score was tied 14-14 after regulation between the Jackets, who are ranked No. 1 in the Southeast Georgia High School Football Power Poll, and the Blue Devils who were looking for their biggest win in two seasons under head coach Jeff Kaiser, a former standout player for Statesboro.

Wayne opened the extra period with a touchdown on a 4-yard run by senior tailback MJ Fuller after taking possession at the 15-yard line. The Jackets converted their extra-point try.

Statesboro, which normally runs from the wishbone, would score on its possession on fourth-and-5 from the 7. They came out in a spread formation with three receivers following a timeout and Will Yawn caught a pass in the flat and fought off the Wayne defense to get into the end zone.

But, of course, Pritchard crashed through the Statesboro line to knock down the point-after attempt to bring the game to a sudden close.

Statesboro scored on its first play of the game when junior Jaylen Roberson broke loose for a 99-yard touchdown jaunt after a Wayne punt to the goal line. According to a published report out of Statesboro, the scoring run was the longest from scrimmage in Statesboro’s storied history.

The Jackets answered immediately with a kick return to the Statesboro 7 by Trey Chancey which led to a 1-yard TD run by Ashby Cribb on fourth down.

Before halftime, Wayne had a double-pass that went for a 65-yard score nullified by a late penalty flag which riled up the visiting sideline and radio crew.

The Jackets would go up 14-7, though, in the third period after recovering a Statesboro fumble in the middle of the field. Wayne would drive 40 yards for a running score from 12 yards out by quarterback Shamar Taylor to take its first lead of the game.

Statesboro would tie the score at 14-14. After converting on fourth down earlier in the game-tying drive, Corey McCullough scored from a yard out on fourth-and-goal for the Blue Devils.

Wayne had a chance to get the win in regulation after marching from its own 5 to the Statesboro 13. But with three timeouts and 57 seconds to play, the Jackets played for the field goal and their attempt missed wide left, sending the game into overtime.

Wayne will be at home next week against South Effingham while the Blue Devils will pay a visit to Ware County which did not have a game on Friday.

In other Southeast Georgia prep football games on Friday night, the results were as follows:

The Wildcats rolled past their South Carolina opponent Friday night at Chris Gilman Stadium in Kingsland.

The win was the fifth in a row for Camden which will carry a 6-1 record into its Region 1-7A schedule which opens next week against top-ranked Colquitt County.

The Wildcats raced out to a 38-7 lead before halftime. In the opening half, Logan Watson tossed three touchdown passes for Camden with two going to Logan Berryhill and another to Andre Rogers.

Also in the first half, Daryl Williams and Jamie Felix scored rushing touchdowns for the Wildcats.

Colleton scored its only touchdown of the night late in the second period.

Camden put two more touchdowns on the board after halftime on a fourth pass for points by Watson with this one going to Shawn Hardy and also a fumble recovery in the end zone by Devin Harris after an errant snap by the Cougars.

Camden amassed 493 total yards while checking the Cougars to 126 for the night.

Colleton had 152 yards through the air but finished with minus-26 rushing yards.

The Bears kicked off their Region 2-3A scheduled with another rousing win.

Thing is, the Bears gave up their first points since the opening game when Brantley scored in the first period.

Pierce (6-0) had posted four straight shutouts since allowing 14 points to McIntosh County Academy in the season opener. The touchdown by the Herons was actually the first score this season against the first-team defense for the Bears.

Brantley would get just that one score, but the Herons did gain 174 yards for the game, which was the most yards anyone has gained on the Bears in their first six games.

Pierce rushed for 342 yards in the victory with John Jones gaining 172 yards on 15 carries and scoring three touchdowns. Jones returned the Brantley’s kick after its touchdown 85 yards for a Pierce score.

Dee Bethea had five carries for 98 yards in the win. He scored twice including a 16-yard run and also a 9-yard pass from Jermaine Brewton who was 7-of-11 for 112 yards.

Pierce was penalized 11 times for 115 yards.

The Bears, who are third in the Southeast Georgia power poll rankings, will welcome Long County to “Bearville” next week.

The Panthers started their Region 2-3A schedule on the right foot with a road victory over the Battle Creek Warriors.

Liberty ran its overall record to 5-1 for the season while Tattnall is still without a win after five games.

Kris Coleman again led the Liberty win as he carried for 167 yards and two touchdowns. One of his scoring runs covered 87 yards.

The Panthers’ other TD came on a 40-yard pass from Dionte Bowens to Markel Jackson.

The Panthers will visit Appling County next Friday for their second region game.

The Pirates had an easy time in their Region 2-3A opener as they rolled past the Blue Tide in Ludowici.

Appling (3-3) scored 14 points in the opening quarter and would post 20 more in the second quarter to lead 34-0 at the halftime break. Both teams scored a touchdown in the fourth quarter.

With the win, the Pirates moved to 9-0 all-time against the Blue Tide.

While Appling will host Liberty next week, Long will visit unbeaten Pierce in Blackshear.

The Tigers sent a statement to their opponents in Region 2-6A as they won in impressive fashion Friday night in Springfield in the first league game for both teams.

Bradwell did not win a region game last season, but they needed only one week to stick one in the win column in region action this season.

The Tigers rode running back Kevin Harris and a strong defensive effort to the convincing win.

They allowed the Rebels (4-3) just two first downs on four possessions in the first half while taking a 13-0 lead into halftime.

Harris would gain 186 yards while scoring three touchdowns for the Tigers who racked up 401 total yards for the game.

Harris scored on a 17-yard run in the second quarter and a 30-yard run in the fourth period when he carried 12 times for 75 yards against a tired Effingham stop-em unit.

The 215-pounder who is committed to South Carolina also caught a screen pass and turned it into a 27-yard score in the third quarter.

Vencent Gilbert threw for 189 yards and two TDs for Bradwell (3-4).

Effingham’s lone touchdown came in the closing moments of the third quarter.

The Rebels will host Brunswick next Friday. Bradwell has an open date next week and will play at Richmond Hill on Oct. 19.

McIntosh gave Country Day all it wanted Friday night before seeing a gutsy effort go for naught when the Hornets scored on a 1-yard run by Eric Brown to break a 6-6 deadlock with just over two minutes remaing in the Region 3-A game played in Darien.

The Buccaneers (0-6 overall, 0-2 region) scored in the first quarter on a 1-yard run by Isaiah Jones, but their extra-point try was blocked.

The Hornets drew even in the third quarter on an 8-yard run by Davion Smith, but they did not convert their extra-point.

Logan Zeigler did make the PAT after Country Day scored the game-winner late.

McIntosh will be on the road next Friday against Savannah Christian.