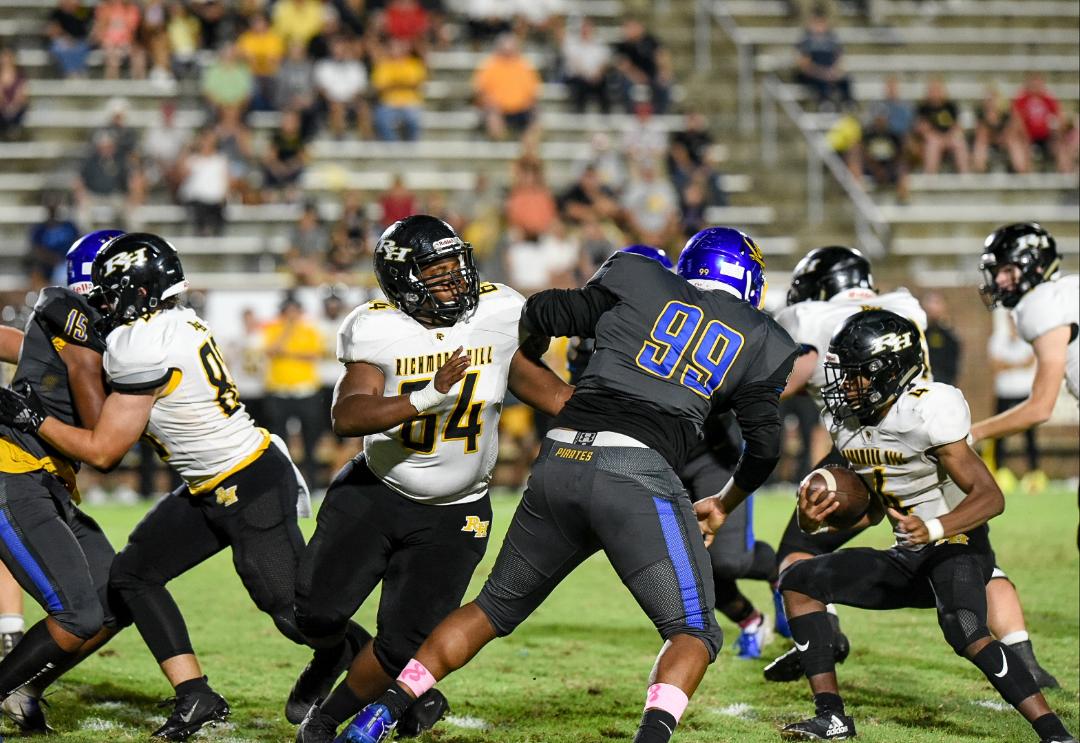 The Brunswick Pirates played what head coach Sean Pender said was their worst game in his two seasons as the team’s head coach Friday as the Pirates suffered a 41-7 loss to Richmond Hill in the Region 2-6A opener for both teams at Glynn County Stadium.

“Lack of execution, plain and simple,” Pender said to start his post-game conference with reporters. “By far, that was the worst game we’ve played since I’ve been here. No execution, very disappointing.”

The loss dropped the Pirates to 3-4 for the season. Richmond Hill improved to 3-3 with the victory.

Brunswick will go on the road next week to play Effingham in Springfield. The Rebels also fell Friday in their region opener against Bradwell, losing 27-8 to the Tigers.

Richmond Hill will come back to Glynn County Stadium next Friday to face off against Glynn Academy which had the night off on Friday.

The Wildcats jumped out to a 14-0 lead in the first quarter against the Pirates, parading 40 yards in eight plays on their first possession of the night after Brunswick failed to pick up a first down on a fourth-and-1 try on its own side of the field to start the game.

Senior Jamal Polite took a direct snap and scored from 4 yards out to open the scoring midway through the first period.

The Wildcats would get a short field again on their next series as they started at the Brunswick 39 following a BHS punt. This time, they covered the distance in three plays with Polite scoring again from 3 yards this time after taking the snap in the Wildcat formation.

Down 14-0, the Pirates did put together a methodical 16-play, 80-drive to pull within 14-7 when senior running back Jaylen Trimmings scored from a yard out just seconds into the second stanza. The touchdown was set up by a screen pass from KJ Lee to Trimmings that went for 29 yards to the Richmond Hill 6-yard line.

Brunswick, though, could not keep the Wildcats from scoring. They would march 60 yards in nine plays to get a 22-yard field goal from Anthony Salazar that made the score 17-7 with 4:46 left in the opening half.

Richmond Hill would tack on a touchdown and another field goal in the remaining time as Brunswick could not move the chains on offense.

The Wildcats’ next scoring drive started at the Brunswick 38, and on fourth-and-2, Jalen Rouse ripped off a 30-yard run to the BHS goal line to set up another Polite scoring run, again on a direct snap from center.

On the final play of the opening half, Salazar drilled a 48-yard field goal to blink the scoreboard to 27-7 at intermission.

The visitors essentially put away the game immediately after halftime as they returned the second-half kick to their own 40 and motored the 60 yards in nine plays with Polite scoring a fourth touchdown from 4 yards to make it 34-7 with 7:18 to go in the third quarter.

Another Richmond Hill touchdown on a 38-yard dash by Rouse on the first play from scrimmage after a Brunswick punt made it 41-7 midway through the period.

That ended up being the last score of the night. The final period was played with a running clock due to the state’s 30-point mercy rule.

“Hats off to them. They executed their game plan, but we didn’t execute at all tonight,” Pender said once again.

Rouse led the Richmond Hill offense with 22 carries for 148 yards. Luke Carter completed four of his seven passes for 71 yards.

Leo Valle led the visitors with nine tackles including one for a loss.

Jaylen Carter led the Pirates’ defense with several tackles and also blocked a field-goal try in the fourth quarter.

“We didn’t show up. No one had a good game for us,” Pender said.

The BHS coach said the Pirates must press on from here.

“The key to our success is the boys not quitting,” Pender said. “If they keep fighting and grinding we can win some games. If we don’t, we’re not gonna win another game.

“We have to put this behind us and move forward. If they dwell on this, the next three weeks are gonna be long and upsetting.”

In the only other Glynn County game on Friday, Frederica Academy won big on Homecoming night on St. Simons Island. The recap is below.

The Knights simply overpowered the Hornets on a festive night on the Frederica campus.

Frederica ran its record to 5-2 for the season with its fifth straight win.

The Knights took command early as they scored twice in the opening eight minutes. Denver Anthony got the Knights off and running with a 25-yard scoring jaunt on the team’s first series.

The next FA score came on a 25-yard pass from Jaylen Simpson to Josh Meadows.

The Knights had a field goal blocked the next time they had the ball, but they would manage to score three times after that in only a minute of clock time.

Simpson scored on 25-yard tackle-breaking run with just over 7 minutes to go in the first half. He would then intercept a tipped pass while playing defense for the Knights and return it 65 yards for a touchdown.

The third FA score in the sequence came after the Hornets fumbled the ensuing kickoff, setting up a 30-yard scoring pass from Simpson to Anthony that pushed the score to 34-0.

Frederica finished another drive with a score before halftime when Jashawn Sheffield caught a 55-yard pass from Simpson.

Westfield also kicked a field goal before the break to get on the scoreboard.

After halftime, Anthony scored a third touchdown for the Knights on a 58-yard scamper.

That was the final score of the game which featured a running clock in the second half.

While the FA offense managed six scores while running 30 plays, the defense created three turnovers and also had two fourth-down stops in the red zone.

All of that pleased Frederica head coach Brandon Derrick.

“Our defense did an outstanding job tonight. We prepared all week to face the Wing-T, and they came out and ran the I-formation which we hadn’t practiced against at all during the week,” he said.

“Our kids and coaches did a great job of adjusting and our kids played really well.

“I thought our kids played really well offensively also. We went with the spread game tonight and attacked the perimeter and had some really long big plays.”

Derrick also had to change his attire almost quicker than his team scored when it had the ball on Friday. He got out of his coaching attire and into a coat and tie to escort his daugther Riley in the Homecoming court at halftime. She ended up being crowned the school’s queen.

“That was awesome,” the coach said. “We had a great crown tonight. It was a really good night for our school community.”

The Knights will be in Dublin next week for a Region 2-AAA game against Trinity Christian in the Georgia Independent School Association.

SE Georgia Roundup: Wayne gets out of Statesboro with 21-20 OT win
Power poll: This week’s rankings do include a few changes
Posting....