Column: A lot of action going on in state college football

Kirby visits Brunswick, Jackets might have their guy and state schools playing deep in playoffs.

The following article is an opinion piece and reflects the views of only the author and not necessarily those of AllOnGeorgia.

It didn’t take long Thursday morning for the news to get out.

There was a special visitor at Brunswick High School, but he wasn’t a stranger to the school or the town folk. 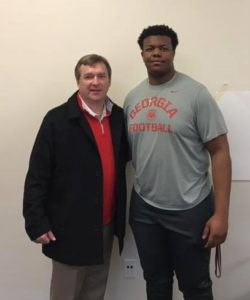 Georgia head coach Kirby Smart stopped by the local high school to visit with Warren McClendon Jr. and his father as part of his recruiting schedule for the week.

Smart had been on the Brunswick campus before to recruit McClendon and other past Pirates. Of course, the Golden Isles has a heavy Bulldog presence and most local UGA fans would recognize the Georgia coach in a second if he were to be seen anywhere in town.

McClendon committed to the Bulldogs this past summer prior to beginning his senior season with the Pirates.

The 6-foot-3, 305-pounder is an offensive tackle and a four-star prospect. He chose Georgia over South Carolina after also seriously considering offers from Florida, Auburn and Tennessee.

McClendon is expected to sign with the Bulldogs during the early signing period coming up Dec. 19-21. He plans to early enroll in school in January.

AllOnGeorgia did a story on McClendon when he committed to Georgia back in the summer. You can read it here.

McClendon will be the first local player to play between the hedges in many a moon and we locals can’t wait to see him in that Red and Black worn by the Dawgs.

Now for other news and notes regarding college football in the Peach State:

* UGA Defensive Coordinator: Most Georgia fans know that the Bulldogs are losing defensive coordinator Mel Tucker to Colorado as he has accepted the head coaching position with the Buffaloes.

Tucker has been with Georgia in the coordinator’s role since Smart took over as head coach three seasons ago, and together the two former Alabama assistants have built one of the country’s best defenses with the Bulldogs.

It’s popular opinion that Smart will promote inside linebackers coach Glenn Shumann to the coordinator position. He also has been with Smart since the beginning while also coming over from Alabama.

Schumann, only 28, is a great recruiter and of course coached Roquan Smith.

Another internal candidate could be Dan Lanning who is wrapping up his first year with the Bulldogs as outside linebackers coach. He coached previously at Alabama and Memphis.

External candidates who have surfaced include Derrick Ansley, who is currently defensive backs coach with the Oakland Raiders. He replaced Tucker with the Crimson Tide for the 2016 season; Kevin Sherrer, who just finished his first season as defensive coordinator at Tennessee. Remember, he was on Smart’s staff as a linebackers coach before he left to work with the Volunteers; and Greg Schiano, current defensive coordinator at Ohio State whose future status with the Buckeyes is unknown with Urban Meyer retiring following the Rose Bowl.

From what I know right now, I say go with Schumann. Next to Smart and Tucker, he probably knows the UGA defense as well as anyone and would seem to be comfortable working side-by-side with Smart. Chances are, he could be in the position a good while until perhaps taking over a big-time program himself one day.

* Dawg DB Honored: Georgia senior defensive back DeAndre Baker is considered the best at his position in college football.

On Thursday night, Baker was announced as the winner of the Jim Thorpe Award which annually goes to the best defensive back in the country. The award was presented at the College Football Awards show televised by ESPN from the College Football Hall of Fame in downtown Atlanta.

This season, Baker had two interceptions, 10 pass breakups and a forced fumble. He often has covered the top receiver for the opposition.

He is the first Georgia player to win this prestigious honor.

Earlier this week, Baker was named to the All-SEC First Team by the Associated Press. Expected to be a first-round pick in the April NFL draft, Baker also said this week he planned to play in the Sugar Bowl and not skip the game like several top pro prospects are now doing. Georgia will play Texas in the Jan. 1 bowl game.

Baker will be missed in Athens, but he should be a star in the NFL.

*Next man for Yellow Jackets: Georgia Tech is of course looking for a new head coach following Paul Johnson’s decision to step away from coaching following the Yellow Jackets’ bowl game on Dec. 26.

We now know that one guy will not be Tech’s new coach. Former Yellow Jacket Ken Wisenhunt withdrew his name from consideration on Thursday and plans to stay on as the offensive coordinator for the Los Angeles Chargers.

Perhaps, he got the feeling his recent interview with the Jackets was only one of the token variety, or maybe he ultimately didn’t want to fool with recruiting.

Some reports indicate current Temple coach Geoff Collins was in Atlanta Thursday to interview for the job and might now be the leading candidate.

He was defensive coordinator at Mississippi State and Florida before taking over at Temple. He is 15-10 in two seasons with the Owls who will play Duke in the Independence Bowl on Dec. 27.

He wouldn’t be a “wow” hire, but I guess he would be a safe and decent hire.

For the record, he has run the spread offense at Temple, and his defensive background could be a huge plus for the Jackets. He also is a pretty fair recruiter and helped assemble one of the best classes in Tech history with the Josh Nesbitt, Derrick Morgan and Roddy Jones group.

In his first full year as the top guy in Statesboro, Lunsford led the Eagles to a 9-win season and a spot in the Raycom Media Camellia Bowl against Eastern Michigan on Dec. 15.

The Eagles were 2-9 last season and are 9-3 this year with a chance to reach 10 wins with a bowl victory.

Perhaps the Eagles got it right with this guy. The early returns are good, anyway.

*Chasing National Crowns: Well, we know the Bulldogs won’t be winning a national championship this year as they weren’t picked for the College Football Playoff following last week’s tough loss to Alabama in the SEC Championship Game.

But two in-state teams are still in the running for national titles – Kennesaw State and Valdosta State.

Kennesaw will play on Saturday in the Football Championship Subdivision quarterfinals as the Owls host South Dakota State with the winner advancing to the semifinals.

The Owls are the No. 4 seed while South Dakota State is the No. 5 seed.

The Jackrabbits have won five in a row and have one of the country’s top offensive backfields.

Kennesaw has a stingy defense and a powerful rushing attack as well.

Many think the Jackrabbits are the more experienced club and will go home with a win after making the long trip to Georgia to play.

Me, I will take the Owls on their home field, say by a field goal.

This Notre Dame is located Ohio, but like the more well-known Fighting Irish from South Bend, this Notre Dame team is also undefeated with a 13-0 record.

The team’s running back, freshman Jaleel McLaughlin, leads the nation in rushing with 2,246 yards on the ground while averaging 172.8 yards per game.

He might want to have a big game Saturday, too, as Notre Dame’s best chance to win might be playing keep away from a high-powered Valdosta State offense that has scored 60-plus points in the last two playoff games.

The Blazers, the top seed, are a perfect 12-0 on the season and they have scored at least 44 points in every game this season.

This is the first time the Falcons have been in the NCAA playoffs.

And here’s thinking, this will be the end of the road for them. Valdosta State will set Bazemore-Hyder Stadium on fire again and will advance to next week’s final against the Ferris State (Mich.)-Minnesota State winner in McKinney, Texas.

You can watch Saturday’s noon game on ESPN3 or the Watch ESPN app.

Column: While we wait to play, we look at the GHSA semifinals and upcoming finals
Frederica celebrates state football championship at school assembly