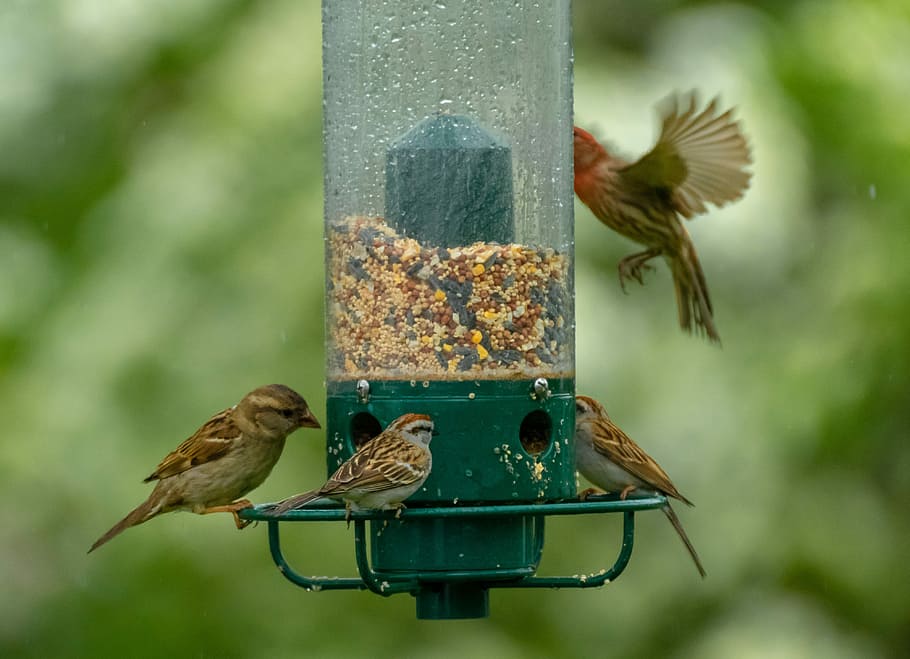 Birds are at risk from a variety of diseases that can flourish when birds flock to neglected feeders.

Wildlife biologist Todd Schneider of the Georgia Department of Natural Resources said the public can help by cleaning their feeders regularly. “A hygienic bird feeder can reduce the risk tremendously.”

Conditions in and around feeders help spur sicknesses ranging from conjunctivitis to avian pox.

Bacterial diseases are transmitted orally and through the accumulation of fecal matter beneath feeders. Birds infected with salmonellosis, the disease caused by the bacteria salmonella, often act lethargic and are easily approached, although other infected birds may show no symptoms.

Birds with conjunctivitis have crusty-looking eyes, may lose their sight and often remain perched on feeders even when approached.

Fungal issues such as aspergillosis, which can cause respiratory distress in birds, are often the result of a buildup of wet and moldy seed hulls beneath feeders.

Avian pox causes wart-like lesions on a bird’s face, legs or feet. More severe cases can cause lesions in their throat, compromising their ability to breathe and eat and sometimes leading to secondary infections. Avian pox can be transmitted from bird to bird by mosquitos, as well as between sick and healthy birds at feeders.

“We see a lot of issues involving salmonella,” said Schneider, an ornithologist with DNR’s Wildlife Conservation Section. “Salmonellosis and aspergillosis are not unusual among feeder birds.”

Where bird feeders, feedings areas and even birdbaths are concerned, these and other debilitating illnesses can often be prevented with proper, routine hygiene. Schneider recommends the following:

What to do if you or neighbors see sick birds at your feeders? Schneider said you can help prevent the spread of disease by taking down the feeders for a week, which will encourage birds to disperse.
Noting that “not all bird feeders are equal,” he also offered a few suggestions about feeder designs. “Plastic and glass feeders are significantly more sanitary and easier to clean than wood feeders, which can absorb moisture,” he said.

Schneider stressed the importance, too, of reporting widespread disease to DNR. “A single dead bird isn’t a cause for alarm, but four or more dead birds in a short amount of time could signal a problem and should be reported to DNR’s Wildlife Conservation Section.”

Report incidents to Todd Schneider at todd.schneider@dnr.ga.gov. Do not handle dead birds with bare hands. For more on bird diseases, visit feederwatch.org/learn/sick-birds-and-bird-diseases.

CONCERNING BIRD FLU
Surging cases of highly pathogenic avian influenza in poultry and other domestic birds as well as in some wild birds throughout the U.S. and Canada have raised concern about possible impacts on songbirds.

However, research suggests that avian flu is unlikely to become widespread in songbirds except for scavenging species such as crows and possibly in areas where the risk of transmission is higher, such as near infected poultry facilities or gatherings of infected waterfowl.
HELP CONSERVE WILDLIFE

DNR’s Wildlife Conservation Section works to conserve songbirds and other wildlife not legally fished for or hunted, as well as rare plants and natural habitats. The agency does this largely through public support from fundraisers, grants and contributions.

Key fundraisers include sales of the eagle and monarch butterfly license plates, as well as annual renewals of these and the ruby-throated hummingbird tags. These plates cost only $25 more than a standard plate to buy or renew. Up to $20 of that fee goes to help wildlife.

Supporters also can donate online at gooutdoorsgeorgia.com. Click “Licenses and Permits” and log in. (New customers will need to create an account.) Learn more at georgiawildlife.com/donations. Visit georgiawildlife.com/conservation/annualreport to see how your support is put to work.

Ga DNR: Give Beach-Nesting Birds Space, Here’s How and Why
Georgia Gas Prices Continue to Rise, See the Lowest in Your Area
Posting....