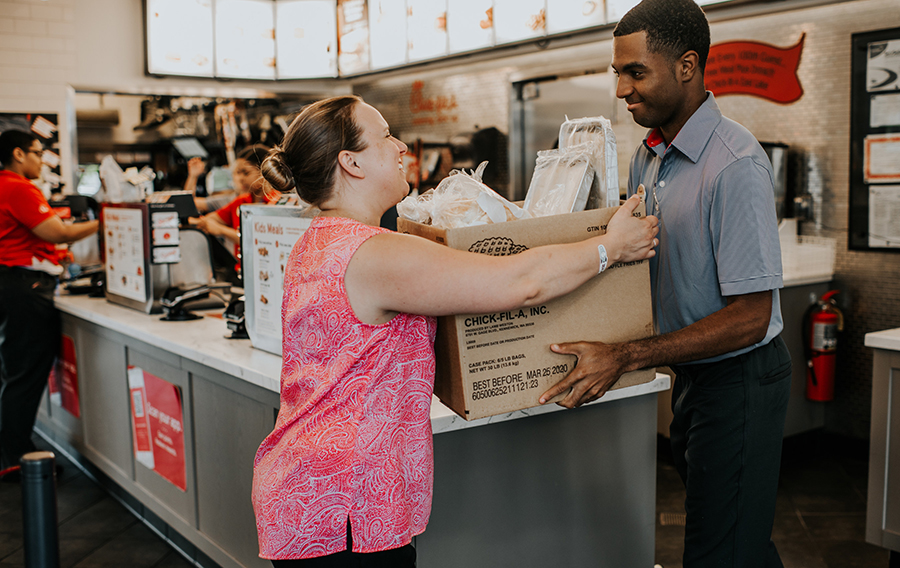 Thanks to the extraordinary efforts of participating Chick-fil-A® restaurant Operators, the Chick-fil-A Shared Table® program has achieved a major milestone: donating more than 15 million meals since the start of the program to help fight food insecurity and reduce food waste in the local communities it serves.

The program has expanded significantly over its 10-year history with restaurants across the U.S. and Canada, donating more than 3 million meals in 2022 to date. This effort to fight food insecurity in local communities also supports a broader sustainability goal for Chick-fil-A, which is looking to divert 25 million pounds of food waste from landfills by 2025 through programs such as Chick-fil-A Shared Table, composting and other efforts.

The Chick-fil-A Shared Table program started in 2012 with the mission of helping Operators fight hunger and reduce waste in their local communities by donating surplus food to local soup kitchens, shelters and nonprofits to feed those in need. Chick-fil-A works with Food Donation Connection and Second Harvest to connect Operators with these organizations, and more than 1,300 restaurants across the U.S. and Canada now participate in the program.

The success of the Chick-fil-A Shared Table program can be attributed to the Operators’ passion to care for their communities and make a positive impact on those around them. “When I helped start this program more than a decade ago, I never imagined we would impact this many people one day,” said Sandeep Kapoor, Operator of Chick-fil-A Macland Crossing in Marietta, Georgia. “It is my hope that this already impressive number of meals donated will double and triple in the years to come.” Kapoor and his Team Members have helped provide more than 11,000 meals to the Marietta community through this program.

“The Chick-fil-A Shared Table program exists and thrives because Operators and their Team Members take initiative to make an impact in their own backyards,” said Rodney Bullard, vice president of corporate social responsibility for Chick-fil-A, Inc. “Whether that’s through 100% restaurant participation in San Antonio, Team Members serving at local soup kitchens, or taking food waste reduction a step further through composting efforts in a Georgia restaurant, our restaurants around the country embrace the opportunity to make a difference.”

To learn more about the Chick-fil-A Shared Table program and other ways Chick-fil-A is making a positive impact in its communities, visit chick-fil-a.com/giving-back.

Atlanta-based Chick-fil-A, Inc. is a restaurant company known for the Original Chick-fil-A® Chicken Sandwich and signature hospitality. Represented by more than 170,000 Team Members, Operators and Staff, Chick-fil-A® restaurants serve guests freshly prepared food at more than 2,700 restaurants in 48 states, Washington, D.C., Puerto Rico and Canada. The family-owned and privately held restaurant company was founded in 1967 by S. Truett Cathy and is committed to serving the local communities in which its franchised restaurants operate.

Known for its leadership and growth opportunities, in 2022 Chick-fil-A was named a Best Employer in America by Forbes and a top company for career opportunities for Black employees by Glassdoor. The company was also awarded the Employee’s Choice by Glassdoor honoring top CEOs and was named a Culture 500 Culture Champion in 2020. A leader in customer service, Chick-fil-A was named QSR magazine’s Drive-Thru Restaurant of the Year in 2021. More information on Chick-fil-A is available at www.chick-fil-a.com and @ChickfilANews.