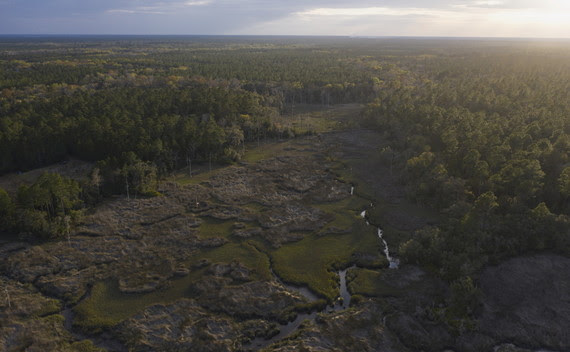 Now a state-owned wildlife management area, only about two years ago the 24,000 acres in Camden County made up one of the largest unprotected wildlands on the U.S. East Coast.

Jason Lee, a Georgia Department of Natural Resources manager who helped preserve the Ceylon tracts and adjacent land then called Cabin Bluff, can reel off the conservation highlights. Nearly 3,000 gopher tortoises, the most on any state WMA. More than 1,000 acres of mature maritime forest. Georgia’s best unspoiled example of longleaf pine savanna, with intact groundcover and pines dating to the 1860s. Freshwater wetlands teeming with life such as imperiled gopher frogs and striped newts. Some 6,000-plus acres of saltmarsh and 19 miles of frontage on the Satilla River, blackwater centerpiece of a watershed rich in history and rare animals, plants and natural habitats.

“Ceylon is without a doubt the single-most important conservation project I’ve worked on,” Lee said.

Thanks to foresight, partners and the Georgia Outdoor Stewardship Program, it is also a natural treasure that the public will enjoy for generations to come.

Known by its 1800s timber-mill village name – derived from the former British colony and tea mecca now called Sri Lanka – Ceylon seemed destined for high-density development and deep-water marinas. Then the Great Recession hit. As development plans stalled, a host of partners stepped in, joining with DNR to conserve the property and a Cabin Bluff tract that was added to the WMA.

DNR acquired the land from project partners in chunks starting in 2021. A conservation easement jointly held by the U.S. Navy and DNR extended the preservation to an additional 3,000 acres. (Ceylon also serves national security as a protective buffer to Naval Submarine Base Kings Bay near St. Marys.)

Forest management by Sea Island Co., a previous owner of the properties, had left the natural habitats largely in place, providing a firm foundation for DNR restoration efforts. That work is in full swing. Recent updates include treating more than 2,500 acres to reduce hardwoods, clearing the way to plant longleaf and spur the growth of native groundcover. Plans call for 2,700 acres of prescribed fire this year. There’s hope, too, the WMA will one day be home to endangered red-cockaded woodpeckers.

Outdoor enthusiasts from hunters to birders are flocking to Ceylon. Which is no surprise. That was part of the vision shared when project leaders began working years ago to save the prized coastal lands.

The pre-application period for the Georgia Outdoor Stewardship Program’s 2022-2023 cycle is open until Oct. 14. Details at www.gadnr.org/gosp.

Ceylon at a Glance