More than eight months of teamwork and a jewelry line concept earned four Parker College of Business students a $5,000 scholarship each after they were named the Top Team during the annual NRF Foundation Student Challenge 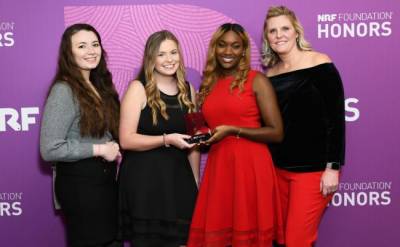 More than eight months of teamwork and a jewelry line concept earned four Parker College of Business students a $5,000 scholarship each after they were named the Top Team during the annual NRF Foundation Student Challenge.

Cayley Creekmore, Shannon Foote, Anna Tiller and Woodley White were recognized in front of hundreds of top executives and celebrities from the retail industry in New York City for their work on a case study that involved Akola, a jewelry company in Dallas, Texas, that empowers women in Uganda by providing them the skills to earn a living wage to support their families.

The group acted as members of Akola’s product development team to develop a complete business plan for a jewelry line, which they created and built from concept and design to product packaging and delivery. The team also created a $10,000 budget plan to take the goods to market and determine the logistics of producing the jewelry in Uganda and shipping them to the U.S.

Additionally, the team had to select a retailer to carry the line and create a 30-page pitch deck along with a 90-second pitch video to present to buyers of Free People, the team’s selected retailer.

“My experience with the NRF Foundation Student Challenge has been an experience I will never forget,” said Tiller. “While participating, my teammates and I were able to take what we learned in the classroom and apply it to a real-world scenario, which isn’t always as easy as it sounds.”

“The NRF Foundation Student Challenge is a major time commitment for the students,” said Kathleen Gruben, Ph.D., the faculty advisor for the team. “Students who participate in the challenge are stretched well beyond their comfort zones into elements of the business and retail industry that they don’t yet understand and can’t learn in a classroom.”

This is the second team from Georgia Southern to win the NRF Foundation Student Challenge, Gruben said, noting this year, students had to apply to be a part of the team and were selected based on GPA, potential to succeed, reputation for a strong work ethic and major.

“We strive to find students who have different skill sets that match well with the various elements and requirements for the project,” Gruben said. “While students like to work in teams with their friends, these students were total strangers when the project began.”

As strangers, the students had to build trust with one another and rely on each other for their project to be successful.

“This entire experience with NRF Foundation has certainly enhanced my appreciation for teamwork,” said Creekmore. “I’ve earned this amazing opportunity to work with other young professionals from an entirely different mindset than mine, and it has really been eye-opening. Each of us has something to contribute, and it’s just up to us to take the opportunity to learn.”

A mentor from KPMG, the challenge’s sponsor, was also assigned to the student team as they worked on their project.

“As the Georgia Southern team started to put the meat on the bones of this year’s challenge, I saw that they had something special in their WISH line, and was blown away with the creativity in the initial submission,” said Renee Howard, the group’s KPMG mentor. “I was shocked to learn that they really didn’t know each other well before this project, which made their success even more impressive. For four virtual strangers to come together, mobilize and create such an outstanding product in such a compressed time frame speaks volumes about not only the talent of these women but their character.”

Gruben agreed, adding how impressed she was with their work ethic.

“It was an incredible opportunity working with these young ladies,” Gruben said. “The biggest reward I get from advising the team is seeing the students transition from students who are still a little unsure of themselves to young professionals ready to tackle the world. Their growth through this project was amazing.”