Evans County deputies responded to six calls involving Yassin Mohamed, the man who later died in an officer involved shooting. One of those calls included a transport to Evans Memorial Hospital where a deputy was reportedly told the man ‘was not a candidate’ for 1013 mental health treatment. 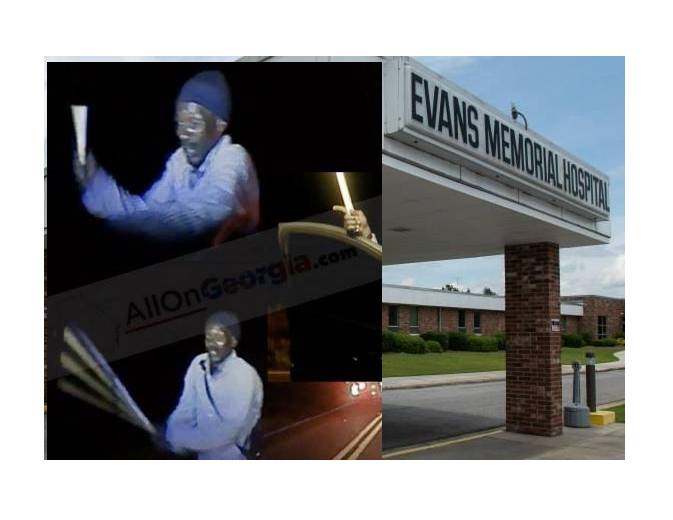 Documents obtained as part of an Open Records Request now reveal that the Evans County Sheriff’s Office responded to six calls involving Yassin Mohamed in the 24-hour period leading up the fatal shooting in the early hours of May 9, one of which resulted in a mental health transport to Evans Memorial Hospital.

AllOnGeorgia previously requested all CAD information for the week leading up to the shooting, any recorded radio traffic, any body camera or in-car camera footage from interactions with Yassim Mohamed, and any incident reports detailing encounters with Mohamed. Any video or paperwork directly related to the shooting (video, incident reports, etc) is not subject to release at this time due to the pending investigation by the GBI.

The Evans County Sheriff’s office provided the CAD reports from dispatch as well as a related incident report from May 8, but said recorded radio traffic is in the possession of Bulloch 911 service and that the Sheriff’s Office does not utilize body worn cameras. Additionally, in the records response, the ECSO said “The in-car camera system in both patrol units in service on the date requested was not functioning,” meaning that no dash cam footage is available of the incidents where ECSO deputies interacted with Mohamed.

The CAD reports, which detail calls, dispatched deputies, transports, EMS responses, and other details of radio traffic and the 911 call center, show that deputies responded to calls involving Yassin Mohammed six times ahead of the seventh encounter – which concluded with a fatal shooting. The encounters occurred at approximately 6:08 a.m., 11:35 a.m., 12:45 p.m., 4:51 p.m., 9:30 p.m., and 10:30 p.m (with Claxton Police).

Calls Begin Early on May 8th.

A complete timeline of May 8-9 with timestamps is outlined toward the bottom of the article.

The first call involving Mohamed was at 6:08 a.m. with Deputy Jesse Kersey responding to a call in which Mohamed’s roommates said he had been acting crazy since returning home from work. The incident report details immense language barriers and an inability to follow commands from the deputy without the assistance of his roommates and a translator. Mohamed reportedly asked for help getting to the airport to return to Sudan. “I do not like America,” he reportedly told the deputy in between noting that people were trying to kill him.The deputy noted that Mohamed was “sweating, nervous, seemed scared, displayed erratic behavior, and would not stand still.” Deputy Kersey made numerous attempts to take Mohamed to the hospital, but Mohamed refused, so Kersey told Mohamed to go in his room, lock the door, and to talk to the HR department at Claxton Poultry when he went to work about returning to Sudan. You can read the incident report here.

In an incident report from later that morning, Deputy Matthew Mallard responded to a call of an unknown nature due to a language barrier. Mallard wrote that he determined after investigation that Yassin Mohamed was having a ‘mental episode’ and advised him of the available remedies for him to seek help.

Mohamed “was pacing back and forth in his yard and appeared to be in a disturbed state of mind…Mr. Mohamed stated that there were two people that were trying to kill him and he needed to get to the US Embassy….[he] was unable to provide a name or any description of the subjects and continued to ramble in broken English and reverting back to Arabic,” the report reads.

The report also says that Mohamed’s roommate told Deputy Mallard that Mohamed “was sick and that these people trying to kill him were not real.” Mallard made multiple attempts to get Mohamed to see a doctor, but Mohamed insisted he be taken to the Embassy. Mallard also requested the roommate and neighbor see to it that Mohamed get help from a doctor, but both refused, according to the report. Because Mohamed did not commit an offense, Mallard could not transport him to the hospital. He left to assist with another call, but was dispatched to the same area again less than an hour later.

This time, Mallard reported that Mohamed was ‘moving frantically’ in the ditch and he asked Mohamed several times to sit down in the grass before he could get him calm enough to explain the problem. Mallard reportedly contacted EMH for a mental evaluation so he could be placed in a facility for help. EMH agreed to see Mohamed in the ER and Mohamed agreed to ride with Mallard to the hospital.

Approximately four hours after dropping him off, Mallard was dispatched to Evans Memorial Hospital where a nurse told him Mohamed was ‘acting up’ and was being discharged. According to the report:

“Dep Mallard asked her [the nurse] what happened to Mr. Mohamed being issued a 1013 and going to a mental facility and [she] stated that he was not mentally ill and he just did not want to take medication. Dep Mallard explained the events leading up to him transporting Mr. Mohamed to the hospital to get help and she continued to state that he was in a sound state of mind because she was able to talk to him and get the days date and he was able to write her name in Arabic. Dep. Mallard informed her that he still believes someone is trying to kill him and that he was running in and out of traffic. However, the nurse and doctor stated he was not a candidate for 1013 because he was not suicidal. At this time, Mr. Mohamed stated that the people that were trying to kill him were around the corner and that he could hear them whispering…Dep. Mallard advised her [the nurse] again that he was not in a sound state of mind and he needed to be sent to a mental facility or he would be out in the roads putting himself and others in danger. The nurse just stated he needed to get in contact with his contractor and figure out return to his country….She then stated that he needed to take his medication or throw it in the trash, that she did not care. She then restated that he had been discharged and requested assistance showing Mr. Mohamed the way out.”

Read the incident report which details all three encounters by Mallard here. Story continues below.

An excerpt of the report is below: 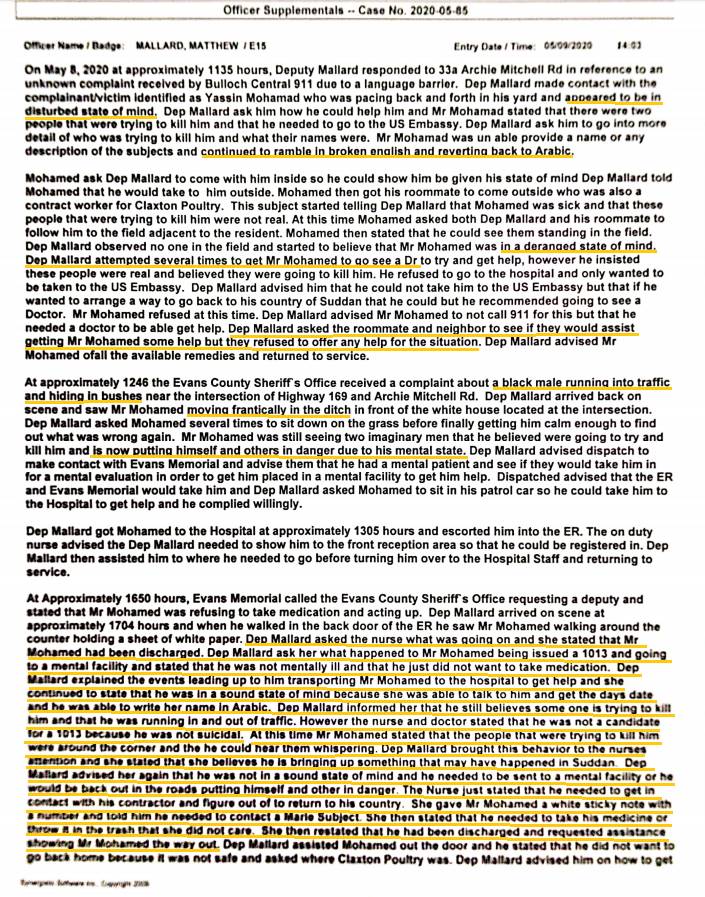 1013/Mental Health Obligations in the State of Georgia

A “1013” is actually a form used to initiate transportation to an “emergency receiving facility” and is completed by an authorized licensed clinician. The language on this form outlines its appropriate use, which includes emergency assistance for persons persons who are:

In order for a peace officer to transport to a facility for a 1013 evaluation, a person must commit an offense AND probable cause to suspect an individual is mentally ill and needs involuntary treatment must exist.

It is not uncommon for an emergency room to receive a 1013 patient and then assist in transfer to a mental health facility for longer term care. According to the ‘Emergency Admission Process Map’ published by the Georgia Department of Behavioral Health & Developmental Disabilities, a person need not be ‘suicidal’ in order to be ‘a candidate’ for a 1013.

The mental health unit at Evans Memorial Hospital is for voluntary patients only, according to hospital staff, but a number of medical personnel at EMH are authorized under Georgia law to complete a 1013 form and assist in transferring a patient to an appropriately equipped facility.

Timeline of Events According to Evans County Dispatch Report

Friday, May 8, 2020
6:08 a.m. – E-9 dispatched to Archie Mitchell Road for an upset man who wants to go back home overseas. It is determined the man is in Evans County for work at Claxton Poultry and would like the deputy to take him to the airport. He shows the deputy paperwork showing he was in the hospital 9 days prior.

11:33 a.m. – E-15 is dispatched to Archie Mitchell Road. With a noted language barrier and after 34 minutes on the scene, the deputy tells the man not to call 911 anymore for transport to the Embassy. CAD report notes “gentleman is mentaly [sic] not all there.”

4:51 p.m. – EMH contacts dispatch and says Mohamed is ‘refusing meds and acting up.’

9:33 p.m. – Yassin Mohamed is at Northside Inn, reportedly screaming for EMS. E-3 arrives on scene and indicates he is having a hard time understanding the male.

10:33 p.m. – EMS reports man beating on ambulance, picked up sticks in yard, Claxton Police respond to the call due the county being inundated with calls.

[during this period, Mohamed smashes a CPD vehicle with a PVC pipe and is ultimately detained until ECSO deputies arrive on the scene — read the article on those details here –]

11:27 p.m. – Dispatch contacts a supervisor at Claxton Poultry, who notifies them of Yassim Mohamed’s address on Archie Mitchell Road.

11:37 p.m. – E-3 leaves Mohamed at or near his home location on Archie Mitchell Road

What are Evans County Sheriff’s Office deputies equipped with on duty?

According to the Evans County Sheriff’s Office, deputies are equipped with the following:

The Use of Force continuum as published by the National Institute of Justice does not require a law enforcement officer to go through each level of force before escalating to the next level of force. Additionally, officers, like citizens, are not taught to ‘shoot to injure’ or ‘shoot to kill,’ but rather ‘shoot to stop the threat.’ More on that here, here, and here.

AllOnGeorgia was notified prior to publishing that a minimal amount of dash cam footage from one vehicle related to a daytime encounter does exist and is in the process of being produced for release. Once available, AllOnGeorgia will publish that footage.