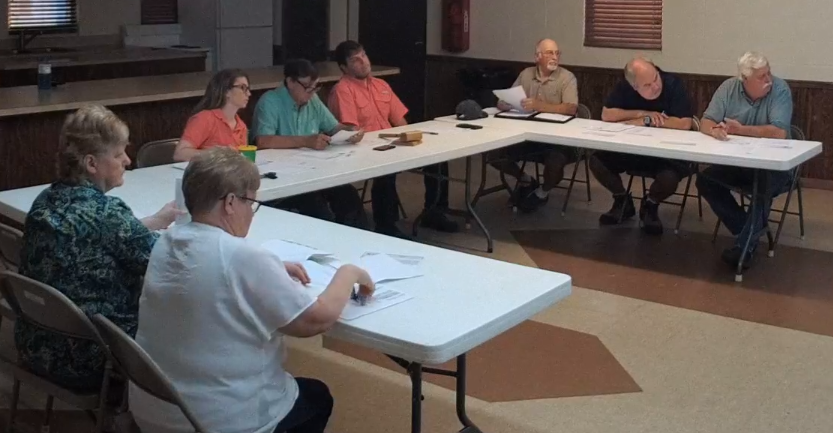 Tensions were high at the Oak Park Council Meeting Monday night as financial turmoil continually led to raised voices, accusations against the city clerk, and calls from the mayor to “hush.”

The first conflict arose when Mayor Larry Wilson called for council to make a motion on bids for gutters on a city building, an issue discussed at several meetings prior. Councilwoman Diane Wilson told the council she wasn’t going to vote to approve something when she didn’t know how much money was in the account, looking to the city clerk. “You promised us we would have financial statements going forward, where are the financial statements?”

City Clerk Monica Slater told Wilson that the accountant has everything. Councilwoman Elaine Strange asked when an accountant was approved by council. Slater didn’t have an answer for that specifically but said it was partly approved five months ago when Council decided to go with another auditor, Wright & Wright.

Mayor Larry Wilson and Councilwoman Diane Wilson, who are brother and sister, had one of of the evening’s most heated exchanges. The exchange begins at the 23:30 mark of the video at the bottom of the article.

Resident Debbie Strange began speaking from the audience, also calling for the financial reports and reminding council members of a promise made at the April meeting.

Mayor Wilson said, “Y’all wait just a minute now. Y’all hush and we can talk about it, but let me tell you something, you’re not running this meeting” looking at Councilmembers Diane Wilson and Elaine Strange.

Councilwoman Wilson said, “But I am a council person,” to which Mayor Wilson replied, raising his voice, “But you can’t talk unless I recognize you, young lady. Look at your charter!!”

Councilman James Head began yelling over everyone, “Point of order, adjourn the meeting!” Head threatened to adjourn the meeting if citizens didn’t quiet down, a move that would have legal ramifications given that council approved an agenda and abruptly adjourning would have meant no action was taken on most of the agenda.

Order was restored, but Strange and Wilson voted NO on the gutter bid because of the lacking financial statements.

The payroll tax issue was also an agenda item for Monday’s meeting and immediately drew questions from the audience and Council members Diane Wilson and Elaine Strange. City Clerk Monica Slater told members of council that the amount owed in payroll taxes, the penalties, and the interest were all still unknown but the hired accountant would be working directly with the IRS. Councilwoman Strange asked Slater how much the CPA and the litigation attorney that had been hired would cost. Slater said the CPA ran about $110 per hour and the litigation attorney billed at $100 per hour.

Members of the audience once again began speaking, which led Mayor Wilson to say, “Y’all be quiet now.” Debbie Strange, a resident, again asked about the financial reports and then why the city had to pay for a city clerk and an accountant for taxes to be filed. “Where is the financial report?” Strange asked.

Mayor Wilson told Strange to “hush or leave the building.” He then said the money that was supposed to be taken out of the checks was still in the accounts. He said he never knew the money didn’t go to the IRS.

Slater interjected to explain the situation further, saying she was not an accountant and payroll was not in her job description as city clerk. That drew loud cries and laughter from the audience.

Mayor Wilson then said, “Y’all shut up or leave.”

Slater maintained she did not know the federal taxes were a requirement.

Tammy Chapman, a resident, asked where the money was but before the question could be answered, Mayor Wilson said, “Would y’all shut up?”

Slater then said the money is still in the bank accounts. “The money is not missing. The money is there in the accounts” she persisted.

No action was taken on the payroll tax situation and with regard to the audit, Slater just reported that the 2016 and 2017 audits will be done within the next four months. Wright & Wright will conduct both audits.

Councilwoman Diane Wilson, at the end of the meeting, asked the question of council as to whether or not she should be excused for robbing a bank if she paid the money back, referring to a recent report by AllOnGeorgia that indicated a use of the city debit card by Slater last September. Slater said it was an accident and was found during the open records request fulfillment for AllOnGeorgia, which led to her repaying the city by money order. Larry Wilson told Diane Wilson that it was “a mistake.”

Councilwoman Wilson pressed the issue and Councilman James Head pushed back on discussing the issue but said the council meeting was the first he was hearing of such an event.

Wilson continued on, with the echo by Councilwoman Elaine Strange, but James Head ultimately told council members he was ready to adjourn and made a motion.

All in all, Mayor Wilson told residents and other council members to “shut up,” “be quiet,” and to “hush,” more than 8 times during the hour long meeting.